By Charles Patterson at Celtic Park

Lazio arrived in Glasgow with a game plan and deservedly took the lead when Manuel Lazzari burst down the right with devastating pace, cutting inside and firing a rocket past Celtic goalkeeper Fraser Forster (40).

The Italians were happy to sit back and counter-attack but Joaquin Correa missed a huge chance to extend their lead after an hour - hitting the post - before Ryan Christie levelled things (67) with his left-foot shot beating Thomas Strakosh inside the box after a square ball from Odsonne Edouard.

Celtic then stole victory at the death when centre-back Jullien smashed home a colossal header from Ryan Christie's corner, before Fraser Forster made a crucial 95th-minute save to seal the victory.

The result means Celtic stay top of Group E on seven points, with Cluj in second on six points after they beat bottom-placed Rennes. Lazio, meanwhile, stay third having lost two of their three games.

The build-up to the game had been overshadowed by fears of racism, with Lazio under the microscope after being punished for the racist behaviour of fans at the home tie with Rennes earlier in October.

Given this scrutiny, the sight of Lazio supporters making apparent fascist salutes in Glasgow's city centre in the hours up to kick-off did little to allay those fears, but inside Celtic Park the visiting support was drowned out by a wall of noise from a raucous home crowd.

Christie and Hatem Abd-Elhamed returned to the Celtic side after missing Saturday's 6-0 hammering of Ross County, but only five Lazio players were retained from the 3-3 draw with Atalanta, with captain Ciro Immobile among the substitutes. These changes perhaps contributed to the Italians' slow start, as Celtic flew at their opponents.

Cetlic made two changes with Hatem Abd Elhamed replacing Jeremie Frimpong at right-back and Ryan Christie coming in for Tom Rogic in midfield after serving his suspension.

Lazio striker Ciro Immobile was rested and placed on the bench, while former Liverpool midfielder Lucas Leiva returned from suspension in six changes for the Italians.

James Forrest escaped on the right inside ninety seconds, and his cut-back found Edouard, but Bastos intervened at the crucial moment.

Forrest and Mohamed Elyounoussi were profiting behind Lazio's wingbacks, as the Italians adopted a defensive back three. Christie too was prominent - his powerful shot from outside the box clipped the post with Strakoshka well beaten.

Celtic's tempo was leaving Lazio gasping for air. Edouard broke at pace and fed Christie, who found Forrest, but the winger hesitated, and the chance was lost.

Edouard then latched onto a glorious pass from Jullien, but Strakoshka raced off his line to clear. McGregor and Elyounoussi both had shots blocked, before Celtic were hit by a classic sucker-punch just before the interval.

Lazio broke upfield with Milinkovic-Savic and Caicedo, whose pass played in Lazzari in acres of space, allowing him to the slam an unstoppable shot past Forster at his near post.

For all of Celtic's possession and energy, they had been dealt a harsh lesson in the art of taking chances.

Galvanized by their lead, Lazio started the second half brightly, as Celtic became sloppy in their passing. Twice Correa had the chance to slip Caicedo in on goal, but both times his final pass was wayward.

Celtic were then nearly handed an equaliser on a plate after a defensive mix-up, but Christie's shot was scrambled clear.

Man of the match: Fraser Forster

The game turned in Celtic's favour just after the hour mark, though not before another huge fright on the counter-attack.

Acerbi denied Edouard with a last gasp tackle, and the ball was swiftly cycled forward to Correa, who slipped it past Forster, but off the near post.

It was to prove a costly miss, as seconds later Edouard cut inside and found Christie, who swept the cross past Strakoshka. Parity at last, and no more than Neil Lennon's team deserved.

Immobile came off the bench and immediately had two gilt-edged chances to put Lazio back in front. First, Forster brilliantly saved from point-blank range; moments later the Italy striker dragged a shot horribly wide after finding space between two defenders.

Celtic drew breath, and then delivered the coup de grâce with two minutes left. After Brown's shot was deflected for a corner, Jullien rose unchallenged to meet Christie's cross and send Celtic Park into rapture.

Lazio were stung, and in a frantic finale, Danilo Cataldi forced Forster into another fabulous save, but the points were secured, to leave Celtic looking good for European football beyond Christmas once again.

Man of the Match - Fraser Forster

Fraser Forster played a key role in Celtic's win, pulling off an unbelievable save in the 95th minute to secure three points rather than one.

He stopped Lazio's super-sub Ciro Immobile from scoring soon after coming on too, with a stunning point-blank stop.

With Lazio registering five shots on target to Celtic's two, Forster was a nuisance for the away side all game, and there was little he could do about the opening goal. Great performance from the 31-year-old.

Neil Lennon insists Celtic's dramatic win over Lazio at Parkhead was an "epic night for players and club". 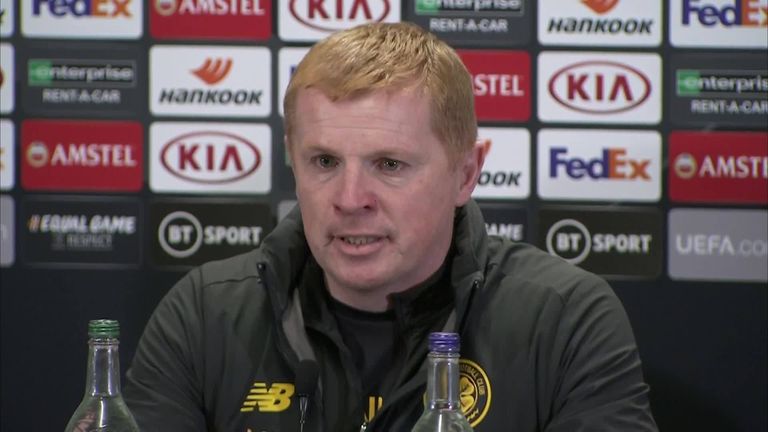 Celtic manager Neil Lennon described his side's Europa League win against Lazio as epic as they beat the Italians 2-1 at Celtic Park.

He said: "Lazio were superb. We started very well, the psychology changed when they scored and we needed to get support to Odsonne Edouard.

"Against quality sides you need your goalkeeper to do well, and Fraser did that with two saves. He makes saves others can't make.

"It was an epic night for players and club. Jullien was outstanding, a rock. I am absolutely delighted with his performance and Scott Brown, when we really needed him, was there to lead the team."

"James Forrest will now be a Celtic player for the rest of his days. He's settled, he's been terrific for a number of years now.

"Callum McGregor, on the other hand, could go, him or Edouard could be the next ones to move."

Celtic travel to Aberdeen in the Scottish Premiership on Sunday, looking to keep their place at the top of the table, and return to Europa League action on November 7 with the reverse fixture against tonight's opponents Lazio.

The Italian side also return to domestic action on Sunday, travelling to Fiorentina in Serie A.