Match report and highlights as Celtic beat Rangers 4-0 in the first Old Firm game of the season; Liel Abada's double and Jota's strike had them 3-0 up at the break; David Turnbull added a fourth; Celtic are now five points ahead of their rivals at the top of the Scottish Premiership 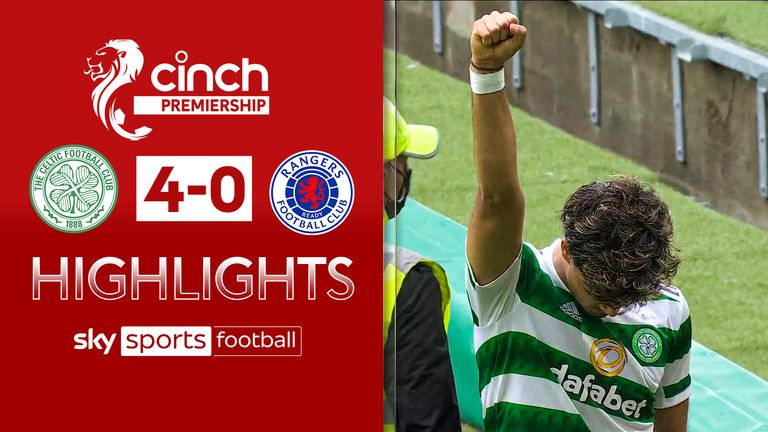 Highlights from the Scottish Premiership match between Celtic and Rangers.

Celtic swept Rangers aside 4-0 in the first Old Firm clash of the season to open up a five-point lead at the top of the Scottish Premiership.

An early injury to in-form striker Kyogo Furuhashi did not phase the champions as Liel Abada fired them ahead soon after.

Jota showed a lovely piece of skill to make it 2-0 with Abada on target again as Celtic raced into a 3-0 half-time lead.

A mistake by Rangers goalkeeper Jon McLaughlin then allowed substitute David Turnbull to make it 4-0 as Giovanni van Bronckhorst once again failed to lead his team to a league victory over their rivals.

The win maintains Celtic's 100 per cent record in the Scottish Premiership this season with 25 goals scored so far.

Can Celtic be stopped?

Postecoglou stayed with the same starting XI that romped to a 9-0 victory at Dundee United in their last Scottish Premiership match.

Alfredo Morelos returned to the Rangers squad after being dropped for disciplinary reasons, but started on the bench with Antonio Colak remaining in the starting XI.

The home side were dealt an early blow with striker Kyogo forced off after just five minutes after suffering an upper-body injury in a challenge with John Lundstram, with Giorgos Giakoumakis taking his place. It did not dent their confidence, though, and Abada fired in the opener just three minutes later. Matt O'Riley flicked the ball on to him from Jota's throw-in and, while Rangers goalkeeper Jon McLaughlin got a touch on his shot, he could not keep the ball out.

Man of the match: Liel Abada

O'Riley's cross then picked out Giakoumakis in the six-yard box as Celtic dominated, but the substitute glanced his header wide of the post.

Rangers' frustration grew as they struggled to find a way into the game, with Borna Barisic picking up a booking for hauling down Abada as he looked to burst forward. 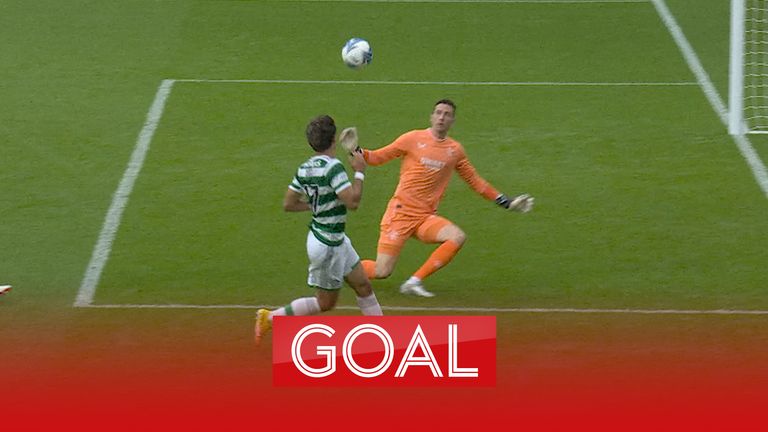 Jota doubles Celtic's lead against Rangers with a stunning lob

The visitors' first real chance came in the 22nd minute as Barisic crossed the ball into Colak, but the striker could not get his header on target.

Lundstram fired a shot well over the crossbar before a lapse in concentration from the Celtic defence left Colak with plenty of space, but all the Rangers frontman could do was send the ball wide.

A moment of brilliance from Jota saw Celtic double their lead just after the half hour. The Portuguese winger picked up the ball from O'Riley and superbly chipped over McLaughlin into the empty net. 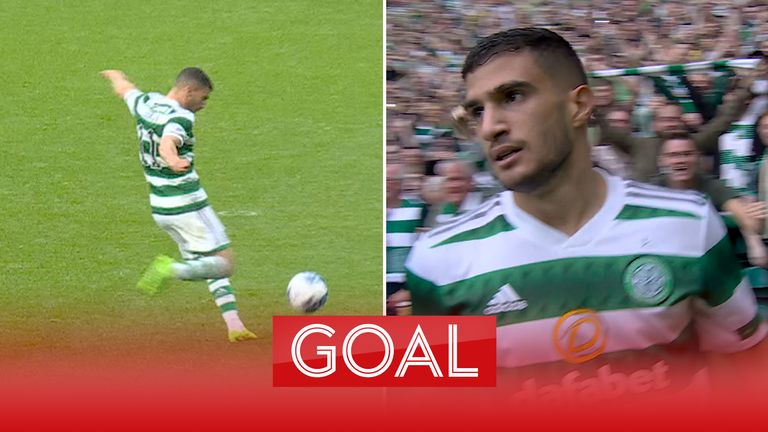 Abada scores a second to give Celtic a 3-0 lead

Then, just as it was back in February, Postecoglou's side found themselves 3-0 up before the break as Abada fired low into the net for his second of the afternoon.

Celtic struggled to keep up their intensity in the second half with few chances in front of goal but continued to limit Rangers.

Carl Starfelt picked up a knock and was replaced by Mortiz Jenz as Postecoglou took no chances ahead of their midweek Champions League opener against Real Madrid. 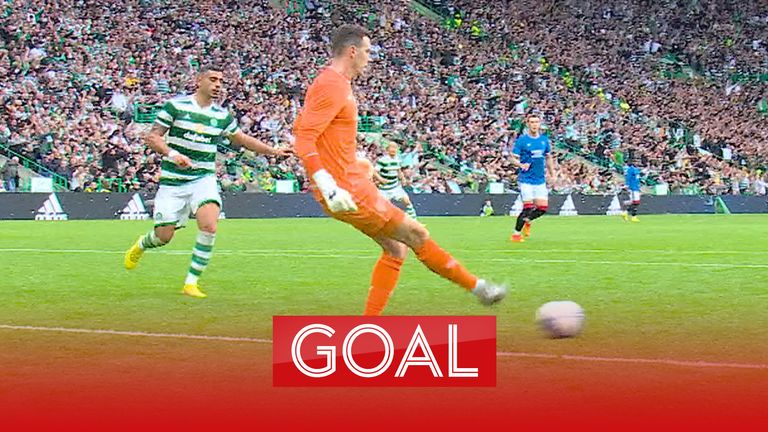 Morelos came on to replace Colak in the second half, but the Colombian could only drag a shot wide of the far post before Scott Arfield fired the ball high over as Rangers failed to make any impact.

Turnbull then came off the bench to inflict more misery on the Ibrox side, firing in the fourth after being gifted the ball by McLaughlin. 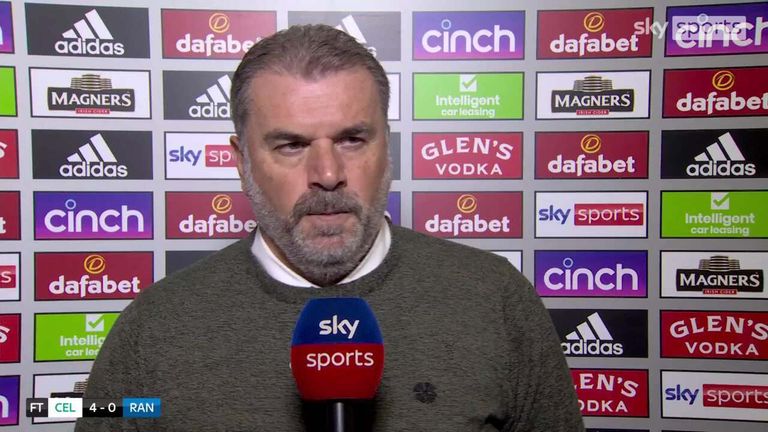 "We've been good since the season started, we're getting better every week and I just thought it was a really dominant performance.

"It's a big occasion and we kind of know what's at stake. I guess some had suggested we'd had an easy run so far, if this was going to be our first test it was about how we handled it. We handled it really well.

"Our press was outstanding today and we really got on top of them.

"Liel's been good since he came. He walked in as a 19-year-old to one of the biggest clubs in the world and he literally hit the ground running and hasn't stopped running since." 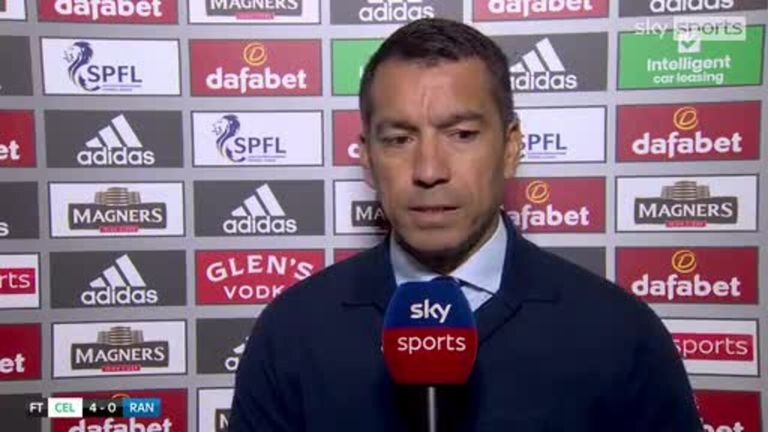 Giovanni van Bronckhorst wants his players to come back stronger:

"It was a repeat of the game we played in February with a quickly-taken throw-in and free-kick. We knew they were some of their strengths and both times we weren't ready.

"You know when you concede early goals like that you make them stronger and make it more difficult for yourself.

"You want to play a good game. You can always have goals against you, but not in this manner. That is not the way we need to concede goals.

"It's difficult for me to say why it happened, but the most important thing is we weren't alert for the first two goals and the fourth as well. That's already three goals we could have avoided.

"Very disappointed we couldn't give our fans the game we wanted. It's a loss for us, we need to take it on the chin and move forward."

The attention now turns to the Champions League for both sides.

Celtic are at home to European champions Real Madrid on Tuesday night with Rangers away to Ajax the following evening.

Celtic are at home to Livingston at 3pm.