Report and highlights from the Carabao Cup third-round clash between Chelsea and Aston Villa at Stamford Bridge as the Blues prevailed 4-3 on penalties on Wednesday night to reach the last 16 of the competition. 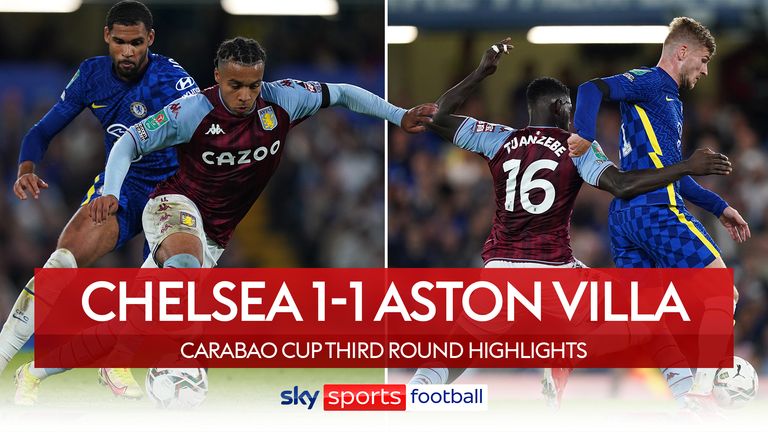 Highlights from the Carabao Cup third round match between Chelsea and Aston Villa.

Chelsea are through to the fourth round of the Carabao Cup after a 4-3 penalty shootout victory over Aston Villa.

The two sides could not be separated in normal time at Stamford Bridge, as second-half goals from Timo Werner and Cameron Archer led to a 1-1 draw on Wednesday night.

But it was the Blues who eventually prevailed, as misses from Ashley Young and Marvelous Nakamba allowed Reece James the opportunity to score the decisive kick.

They will host Southampton in round four of the competition, with the game taking place on October 26 or 27.

Chelsea dominated the first half, with nearly 70 per cent possession despite their much-changed line-up, but it was Villa who should have gone into the break in front.

On two occasions 19-year-old striker Archer had glorious opportunities to score after swift Villa counter-attacks, but on both occasions he couldn't take his chance.

The first came on eight minutes after being fed in by Morgan Sanson, but he hit his effort over the bar. The second on the stroke of half-time after being found in the box by Bertrand Traore, but this time his dinked effort was kept out by Kepa.

It was Chelsea who did strike first after the break, though, as Werner grabbed his first goal of the season on 54 minutes, finding himself between two Villa defenders to head a sumptuous James cross past the helpless Jed Steer.

Villa were level 10 minutes later, however, as Archer finally got his goal. The teenager had scored a hat-trick in the previous round at Barrow, and grabbed his fourth of this season's competition with a brilliant header from Matty Cash's cross, peeling away from his marker before powering his effort off the bar and in.

It was a goal that sent the game through to a penalty shootout, and it was Chelsea who sealed their passage to the fourth round.

Young and Nakamba both hit the bar to give Ben Chilwell the chance to seal victory with the penultimate kick, but his miss and Emi Buendia's success meant it was up to James to settle matters, and he did so with aplomb as he found the top corner.

Chelsea's Thomas Tuchel: "Two days [is how long we worked with the team]," Tuchel said after tonight's victory. "We knew after the Tottenham game who we wanted to get 90 minutes into the legs of.

"So two days and we worked on the same principles. It was the same structure so we don't make it too complicated or unfair [on the players]. We trust them anyway. A lot of them can play against City or Juventus and it was necessary they get competitive minutes in their legs.

"What we demanded was intensity, energy, attitude, to try their very best. Maybe we didn't expect the most fluid and precise attacking game from the start but it got better and better because the guys did well on this and it's a perfect evening."

Man of the Match - Reece James

Playing in something of an experimental backline for Chelsea, James once again looked an imperious presence in defence and a constant threat down the right in attack. His cross for the goal was so good even Werner couldn't miss, and he stepped up and showed brilliant composure to score the decisive penalty.

Both sides are back in Premier League action at 12.30pm on Saturday. Chelsea host Manchester City, while Aston Villa head to Manchester United.