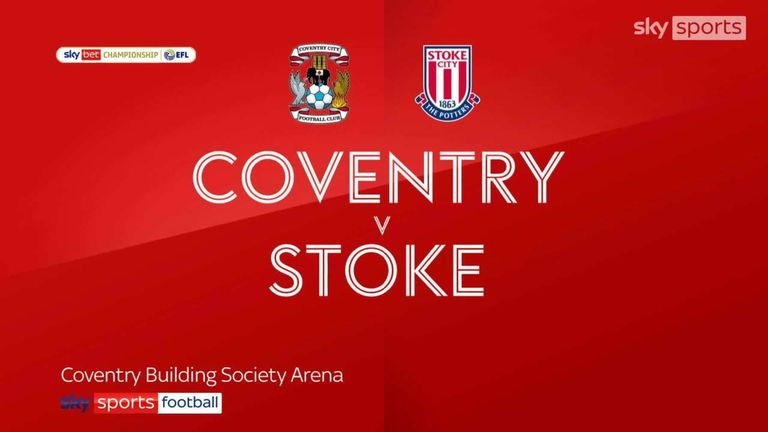 Highlights of the Sky Bet Championship match between Coventry and Stoke

Viktor Gyokeres scored for the first time since early October as he hit the winner in Coventry's 1-0 victory at home to Stoke.

The striker, who had been without a goal since a double in a 4-1 win against Fulham on October 2, struck in the 68th minute to earn the Sky Blues their first home win in the Championship in five attempts.

The Swede kept his place in the starting line-up, having returned to the side for the weekend defeat to QPR due to Matty Godden's appendicitis, while Josh Eccles was handed his first start of the season at right wing-back, with Todd Kane, Fankaty Dabo and Ian Maatsen out injured.

There was also a first start for new signing Jake Bidwell as Jordan Shipley returned to a more familiar midfield role, while Michael O'Neill made just one change to his Stoke side, with Tom Ince replacing Joe Allen.

Unlike Saturday's 2-1 loss to Rangers, this match started slowly, Stoke applying the early pressure but failing to create any meaningful opportunities.

It was Gyokeres' persistence down the left that brought the game's first opening as he dispossessed a Potters defender before cutting inside, but his low effort was comfortable for Stoke goalkeeper Jack Bonham.

The 23-year-old forward had a golden chance to end his drought when he intercepted James Chester's slack pass in front of goal but lacked composure as he once again shot straight at Bonham.

It was almost third time lucky for the former Brighton man when he was agonisingly close to getting on the end of a knock-down in the six-yard box, but the Stoke defence stood firm.

Gyokeres was looking devoid of confidence, but, after Shipley's effort was deflected narrowly over by Tommy Smith and Eccles headed wide, the Swede stepped up to notch his 10th goal of the season.

City won the ball high up the field and Ben Sheaf's forward pass found Gyokeres, who turned and took aim from outside the area and powered an effort past a helpless Bonham.

Coventry almost doubled the lead when Martyn Waghorn's long-range effort fizzed past the right-hand post with 15 minutes to go.

Stoke finished the evening without a shot on target as they slumped to back-to-back defeats in the wake of their weekend loss to Fulham.

Coventry's Mark Robins: "Viktor took his chance and he kept getting in there which I'm really proud of him for. It isn't easy when you are on your own, against three defenders and not scored for a while. That will do him and us the world of good. He can hit them and the keeper had no chance, I'm delighted for him. I said to him at half-time and during the game, 'Don't beat yourself up, just keep getting in there, something will come' and thankfully it did.

"It feels better than Saturday, that's for sure. We have been licking our wounds since Saturday and still feel aggrieved. But that is the best way of getting over it, the way we performed against a team that pound for pound is one of the best squads in the division. When we were in possession, we caused them a lot of problems and the one goal I'm delighted with and it should have been more."

Stoke's Michael O'Neill: "This league is about churning out results. That isn't always about quality of play, it's just about finding a way to win. I think every game we've lost bar Fulham, we've lost by a single goal margin. That tells us we're not doing enough to win games and we can't get away from that. We're at the point where we win one, draw one, lose one type of scenario and we know where that leaves you in the league."

"It's a poor goal for us to lose. I think there were times in the game we played some really good football, but we didn't hurt the opposition enough when we did that. Ultimately, it felt like a game when there wasn't going to be a lot in it. They created more than we did, there's no doubt about that, and in the second half once they got ahead it looked like they had that extra bit of energy."