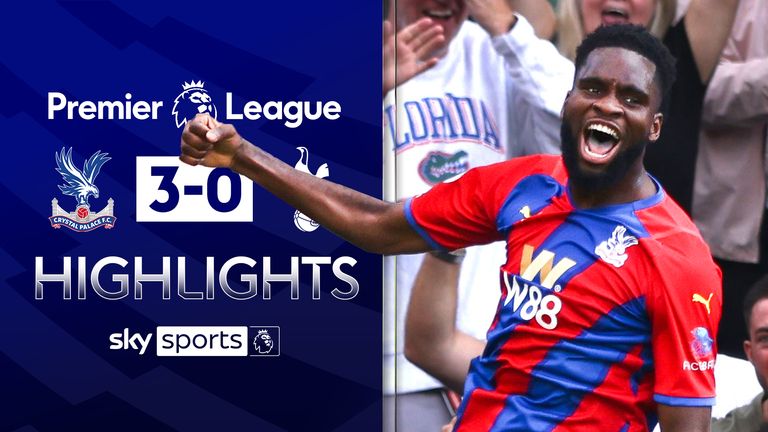 FREE TO WATCH: Highlights from Crystal Palace's win over Tottenham

Odsonne Edouard scored twice on his Crystal Palace debut as Patrick Vieira's side secured an emphatic 3-0 win over 10-man Tottenham at Selhurst Park.

The striker, an £18.5m signing from Celtic on Deadline Day, scored his first just 28 seconds after coming off the bench in the 84th minute then netted his second, and Palace's third, in stoppage time.

Earlier, the depleted visitors had been reduced to 10 men when defender Japhet Tanganga received two yellow cards in the space of five minutes early in the second half, the first for a shoulder-barge on Wilfried Zaha, who was also booked in the subsequent melee, and the second for a late lunge on Jordan Ayew.

Palace were still searching for a breakthrough at that point despite dominating from the start of the game, and it arrived in the 76th minute when Zaha coolly converted from the spot after a Conor Gallagher cross had struck Ben Davies on the arm.

Edouard's late double ensured the best was yet to come for Palace, who celebrated their first Premier League win of the Vieira era, while Spurs, who only mustered two shots on goal, were left to reflect on an abrupt end to their winning start to the campaign.

While Palace were able to name an unchanged line-up from their 2-2 draw with West Ham before the international break, including new signings Edouard, Michael Olise and Will Hughes on the bench, Tottenham's preparations were far from ideal.

As well as losing Heung-Min Son and Steven Bergwijn to injuries, Spurs boss Nuno Espirito Santo had to do without Giovani Lo Celso, Cristian Romero and Davinson Sanchez after the trio defied Premier League rules to join up with Argentina and Colombia respectively.

Nuno's under-strength side struggled to assert themselves on the game in the early stages and their problems were compounded when Eric Dier hobbled off injured following a collision with Jordan Ayew.

Palace dominated both possession and territory and did much of their attacking down the left flank, where Zaha was up against Spurs debutant Emerson Royal.

The Brazilian, a £21.5m signing from Barcelona on Deadline Day, made an assured start but Zaha soon started to cause him problems as Palace finally managed to turn their possession into scoring chances.

Zaha saw two deflected shots bounce wide in the space of less than two minutes towards the end of the first period, and the Ivorian then laid on the best chance of the half for Gallagher after spinning away from Royal and cutting the ball back from the byline.

Gallagher appeared well-placed to score from inside the Spurs six-yard box but the Chelsea loanee, who netted twice in his last game for the Eagles, sent his shot too close to Hugo Lloris.

Spurs, meanwhile, were unable to create anything of note, with Harry Kane starved of service as they failed to have a single shot in the first half of a Premier League game for only the second time in the last six seasons.

Spurs managed their first shot of the afternoon soon after the break as Lucas Moura sent a long-range effort straight at Vicente Guaita but Palace continued to enjoy the upper hand.

Gallagher went close with a snap-shot which deflected wide soon after Moura's effort and the game's first major flashpoint came a few minutes later when Zaha and Tanganga squared up after the former was barged to the ground by the latter.

Tensions simmered away after the brawl that followed, after which the two players were shown yellow cards, and Tanganga's frustration soon got the better of him when he went in late on Ayew, forcing Jonathan Moss to brandish a red.

From there, the pressure ramped up as Zaha continued to tear into Nuno's side from Palace's left.

Ayew twice went close, on one occasion forcing a last-ditch block from Dele Alli, while a looping cross from Tyrick Mitchell had to be cleared off the line by Sergio Reguilon.

Palace didn't have to wait long for the breakthrough, however, and while Spurs were unhappy with the penalty award, the decision was upheld by VAR and Zaha converted from the spot.

The Ivorian then turned provider for Edouard to score his first goal just seconds after replacing Christian Benteke, the 23-year-old finding the bottom corner from Zaha's low cross.

Selhurst Park was still bouncing when the striker struck his second, his angled shot from the left-hand side of the Spurs box proving too powerful for Lloris and sealing a memorable victory for Palace.

Crystal Palace boss Patrick Vieira: "I think it was a really good team performance. I think we started the game quite well, with a lot of energy. We competed quite well, managing to win the ball quite high. I'm really pleased with the performance we had today.

"I think there's still more to come from this team but today we competed well with calm and concentration on the details. I was really pleased with the way we defended as a team because we didn't give them a lot of space to create chances.

"If you want to win games you have to be consistent in that."

Tottenham head coach Nuno Espirito Santo: "We didn't play a good game. I thought it was going to be tough here, but we didn't perform as we showed before, and, honestly, I believe we should be much better.

"There were too many obstacles during the game, always trying to find solutions, so it was a tough day for the boys. After going down to 10 men, it becomes much harder. We have to analyse it but we have a lot of work to do."

This was a classic Zaha performance. The 28-year-old appeared frustrated by Tottenham's close attention right from the start of the game but the angrier he got, the more dangerous he became.

He soon began to dominate his duel with Royal on Palace's left flank and once he knew he had the beating of his marker, he did not relent.

He played a key role in pushing Tanganga towards his red card and everything Palace did seemed to go through him. He scored his penalty confidently then set up Edouard's first and there were plenty more eye-catching moments.

The statistics underlined his influence. By the end of the game, Zaha had taken four shots, created three chances, completed six dribbles and won four fouls. Spurs simply couldn't cope with him.

Crystal Palace continue their Premier League campaign away to Liverpool next Saturday, with kick-off at 3pm. Tottenham face Rennes in the Europa Conference League on Thursday evening before a Premier League clash with Chelsea, live on Sky Sports from 4pm next Sunday; kick-off 4.30pm.