Everton Women 3-1 Birmingham City Women: Hanna Bennison stunner gets hosts off the mark in the WSL

Report as record Everton signing Hanna Bennison comes off the bench to help her new side beat Birmingham Women 3-1 at Walton Hall Park; Leonie Maier's deflected effort had given the hosts the lead; Birmingham levelled through Jade Pennock, before sub Rikke Sevecke headed in a late third 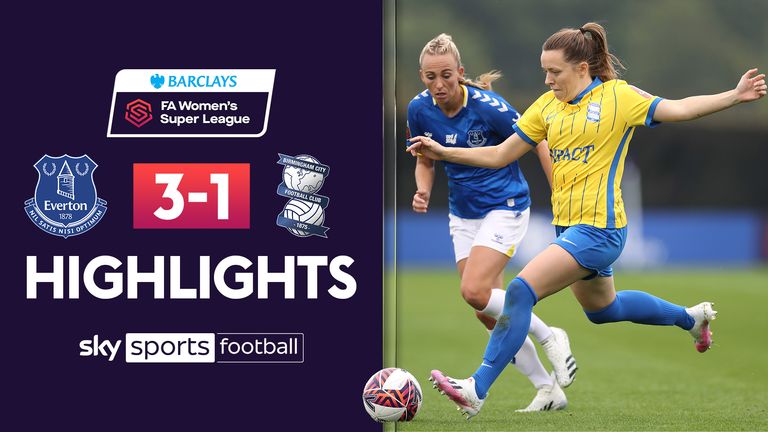 Highlights from the Women's Super League match between Everton and Birmingham.

Bennison, 18, signed from FC Rosengard for a record fee last summer, decided a tight contest at Walton Hall Park with a sublime goal 17 minutes from time.

The home team had taken a 13th-minute lead thanks to Leonie Maier's deflected effort - the Germany right back's first goal in English football.

Substitute Rikke Sevecke then headed in a third goal in stoppage time - her first goal for the club as well - to seal Everton's victory as Scott Booth's team were forced to wait for their first points of the season.

The hosts made four changes from the side that lost 4-0 to Chelsea before the international break, with Toni Duggan starting. Defender Leonie Maier was also back for her first start of the campaign and both Kenza Dali and Grace Clinton returned.

Meanwhile, the visitors made two changes from the 5-0 loss to Brighton, with Jade Pennock featuring, while Gemma Lawley also got the nod, with both players subs last time out.

How Everton registered their first win of the season

Both sides headed into the game having failed to win or score a goal this season - meaning surely something had to give in the lunchtime kick-off on Merseyside.

It did, in a free-flowing contest that came to life when Everton took a 17th-minute lead as a simple long ball over the top caused panic in the Blues defence, before Maier's shot took a wicked deflection on its way past a wrong-footed Emily Ramsey.

The visitors were not deterred by that early setback and were soon on level terms as Pennock picked up possession some 25 yards out, before twisting, turning and then firing an unstoppable shot into the bottom left-hand corner for her first-ever Blues goal.

With the scores level at the break, Kirk opted to introduce young Sweden midfielder Bennison and the decision proved to be a master stoke as the club-record signing gave the hosts the lead again - and in some style.

Displaying quick feet in a tight space, the 18-year-old played a neat one-two with Toni Duggan, before placing an unstoppable shot into the corner of the net from the edge of the box in what is already a goal-of-the-season contender.

Everton largely controlled the final 20 minutes, confirming their first win of the campaign when Sevecke rose highest to head home a 97th-minute corner.