Crucial Champions League second qualifying round in Denmark after first-leg 1-1 draw.; PSV or Galatasaray await in next round, if Celtic fail to overcome Midtjylland, they drop into the third qualifying round of the Europa League to face FK Jablonec; kick-off 6.45pm BST on Wednesday

Celtic travel to Danish side Midtjylland in the second leg of their Champions League second qualifying round, with the score 1-1 from the first leg.

However, Albian Ajeti has recovered from the issue which forced him to miss Saturday's 6-2 friendly defeat by West Ham.

On Griffiths, Postecoglou said: "He picked up a slight injury yesterday (Monday) in training, which was disappointing for him because he was obviously going to be part of the travelling party.

"Albie trained yesterday and he is fine, so he will be involved. Everyone else from the weekend, apart from Leigh, pulled up fine."

But new signing Carl Starfelt is set to be available for Saturday's cinch Premiership opener against Hearts, with the Sweden centre-back in quarantine in London following his move from Rubin Kazan.

Postecoglou, who added that Christopher Jullien faced another "couple of months" out as he battles back from a knee injury, said: "Carl has started some individual training and we are hoping he joins us at Lennoxtown by the time we get back to Scotland. 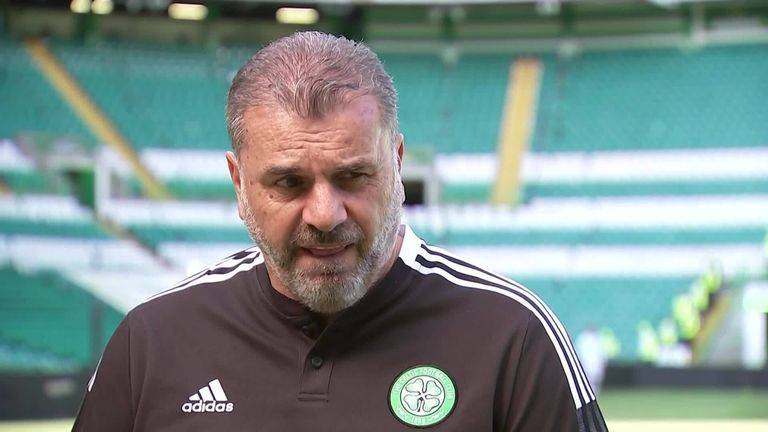 "We will see what his condition is like then but he should be available by the weekend."

If Celtic fail to overcome Midtjylland, they drop into the third qualifying round of the Europa League, where they will face FK Jablonec of the Czech Republic.

Sky Sports' dedicated live blog will be up-and-running from 5.45pm on Wednesday evening on SkySports.com and the Sky Sports App, ahead of the 6.45pm kick-off.

If Celtic fail to overcome FC Midtjylland in Champions League qualifying, they drop into the third qualifying round of the Europa League, where they will face FK Jablonec of the Czech Republic.