Match report Funso Ojo's second-half strike earns Aberdeen a point at Tynecastle; Hearts had led thanks to Liam Boyce's first-half penalty; the draw leaves both clubs tied with Hibernian in a three-way battle at the top of the Scottish Premiership 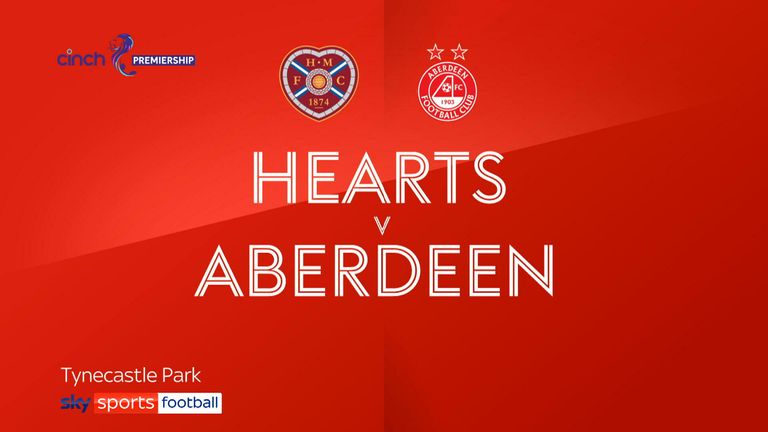 Highlights of the Scottish Premiership clash between Hearts and Aberdeen.

Funso Ojo secured a point for Aberdeen against Hearts in an entertaining 1-1 draw at Tynecastle.

The hosts had taken the lead from the penalty spot through Liam Boyce in the second half before the Belgian levelled for the Dons.

A draw, which leaves both clubs tied with Hibernian in a three-way battle at the top of the Premiership, was a fair result given what they put into a fiercely competitive match.

That keenly fought nature of the game continued after the final whistle when Hearts manager Robbie Neilson and Aberdeen captain Scott Brown had to be separated during a heated argument.

This was the first capacity game at Tynecastle since the pandemic began in March 2020 and the players were greeted to a deafening roar as they made their way out onto the pitch.

Aberdeen, showing three changes to the team that started against Qarabag in midweek, settled well against a Hearts side keen to put on a show in front of their own fans.

It was clear from the early exchanges that there was little between the sides on the pitch.

Every ball was keenly contested during a competitive start that was bereft of goalmouth action.

The only real opening of the first half came in the 16th minute when the visitors tore Hearts apart with a flowing counter attack.

Teddy Jenks and Lewis Ferguson combined to set Christian Ramirez free but the striker shot straight at the body of Craig Gordon.

There was a touching moment in the 26th minute when Hearts fans paid tribute to late captain Marius Zaliukas, who died last December following a battle with Motor Neurone Disease, by twirling their scarves in memory of the Lithuanian.

Hearts had a great chance to break the deadlock 10 minutes into the second half when Gary Mackay-Steven shot wide in a crowded box after Joe Lewis flapped at a sliced clearance from team-mate Brown.

However, the home side did break the deadlock in the 56th minute from the penalty spot.

Declan Gallagher was adjudged to have tripped Mackay-Steven in a coming together inside the area.

Boyce sent Lewis the wrong way from 12 yards to give Neilson’s side the lead with his sixth goal of the season.

Aberdeen levelled in the 72nd minute with a well-executed near-post finish. Dean Campbell recycled a Ramirez cross and his low delivery was turned in by Ojo from close range.

The teams kept going right until the final whistle but a winning goal eluded both sides.

Hearts take on Dundee United at Tannadice on Saturday (3pm), while Aberdeen host Qarabag FK in the second leg of their Europa Conference League Qualifying playoff on Thursday at 7.45pm, trailing 1-0 from the first leg, before entertaining Ross County next Sunday at 3pm.