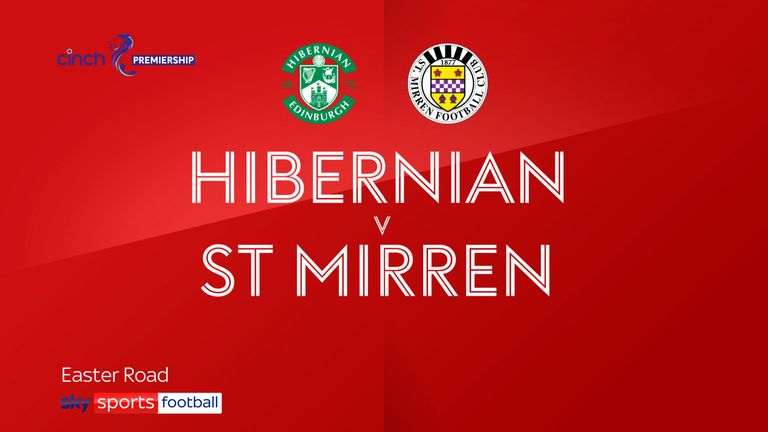 Highlights of the Scottish Premiership match between Hibernian and St Mirren.

The hosts struggled to impose themselves in the first half and trailed at the break to Eamonn Brophy's opener.

Hibs improved after the interval and looked to be heading two points clear of Rangers at the top of the cinch Premiership after goals from Paul McGinn and Martin Boyle turned the game in their favour.

But Shaughnessy's header, with two minutes remaining, was enough to secure a deserved point for Jim Goodwin's spirited side.

Hibs made one change to the side that started the goalless Edinburgh derby last weekend as former St Mirren midfielder Jake Doyle-Hayes returned from illness and took the place of James Scott.

St Mirren's only alteration to the team that began the home draw with Dundee United involved Alan Power replacing Curtis Main, meaning Irish midfielder Jamie McGrath started for the Paisley side just a few weeks after his proposed
transfer-deadline day move to Easter Road fell through at the last minute.

After a low-key opening to the match, Hibs winger Boyle had the first notable attempt when he shot wide from the edge of the box after 16 minutes.

Thank you for your support today, Hibees.

The hosts created the first clear chance of the match in the 28th minute but Kevin Nisbet miscued his shot from 10 yards out after being set up by Kyle Magennis and the ball rolled harmlessly wide.

St Mirren went ahead with their first proper opportunity of the game three minutes before the break when Brophy collected possession wide on the left, attacked Porteous and fired in a low angled shot from 12 yards out which beat
goalkeeper Matt Macey at his near post.

Hibs were jeered off at half-time by their own supporters and manager Jack Ross sent on fans' favourite Scott Allan - who almost signed for St Mirren in the deal that would have seen McGrath join Hibs - in place of Chris Cadden in left
midfield.

The switch helped spark some much-needed life into the hosts' play and within five minutes of the restart Porteous had a header from a Magennis corner ruled out after Boyle was judged to have been interfering from an offside position.

The equaliser came in the 57th minute when former St Mirren defender Paul McGinn volleyed in a superb angled strike after being picked out by a perfectly-weighted pass from Allan.

Hibs went ahead on the hour when Boyle fired home a penalty after Porteous was deemed to have been fouled by Matt Millar.

But St Mirren kept pushing in the closing stages and were rewarded with an equaliser in the 88th minute when Shaughnessy nodded in Scott Tanser's cross at the back post.