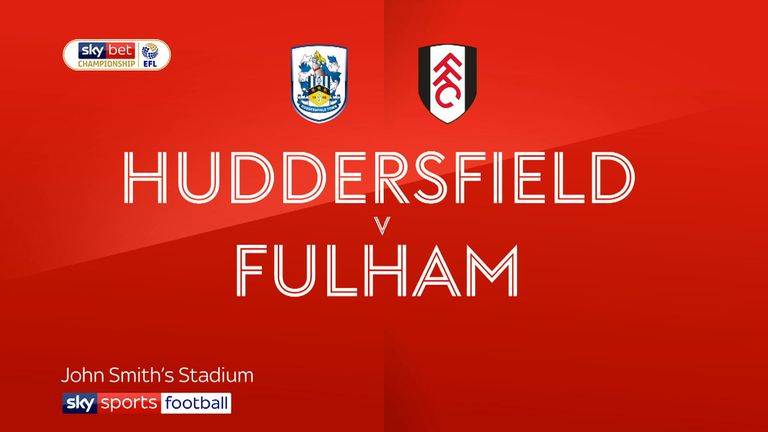 Highlights of the Sky Bet Championship match between Huddersfield and Fulham

The defeat left Huddersfield with just four wins in their previous 51 competitive fixtures and Siewert's departure was announced shortly after the final whistle.

It was, in fact, the hosts who had dominated the first half, but Aleksandar Mitrovic netted the opener six minutes after the break when he leapt above Tommy Elphick to head past Terriers' stopper Kamil Grabara.

Karlan Grant scored his third goal in as many games to level (57), but on-loan Wolves forward Cavaleiro settled the match with a delightful curling effort 10 minutes from time.

Man of the match: Ivan Cavaleiro

Fulham move up to third after their second win of the season.

Huddersfield's relegation hangover had been laid bare in the opening weeks of the season, with a midweek Carabao Cup defeat to Lincoln increasing speculation about Siewert's future at the club, but it started surprisingly brightly in west Yorkshire.

The Terriers pressed high and prevented their opponents passing out from the back, calling debutant right-back Steven Sessegnon into action early to block Lewis O'Brien's effort, before Alex Pritchard's low shot skimmed the outside of the left-hand post.

Wasteful Cavaliero passed up two significant chances, but though the hosts' creativity continued to give them an edge, Joe Bryan tested Kamil Grabara with a low, angled drive just before the break.

The lads with that #FridayFeeling 🙌 pic.twitter.com/chIusB4ZKQ

Rarely one to remain in the shadows, Mitrovic bettered a quiet first half as he got Scott Parker's side off and running six minutes after the restart. Helped by a wild clearance by Juninho Bacuna across his own penalty area, the Serbian frontman powered home, though Elphick was positioned goal-side.

Aside from the inclusion of Juninho Bacuna, Terriers boss Jan Siewert fielded an entirely different starting line-up following the shock Carabao Cup defeat to Lincoln in midweek. It was, however, similar to the side that drew 1-1 with QPR last weekend, with Elias Kachunga replacing Adam Diakhaby.

For Fulham there was just one alteration: Steven Sessegnon replaced Denis Odoi at right-back to make his league debut for the club exactly three years to the day that his twin brother Ryan achieved the same feat.

The goal decision system was required to adjudge whether Grant's angled header had crossed the line before Marcus Bettinelli palmed it clear, but though referee James Linington pointed to his watch to confirm the goal, ultimately, it was not enough to arrest the hosts' alarming start.

Mitrovic brought down Sessegnon's deep cross from the right and laid the ball off to Tom Cairney who, in turn, passed to Cavaleiro. He stalled for a second to allow Joe Bryan to make a decoy run on the overlap, before curling a the superb winner.

Man of the match - Ivan Cavaleiro

In his post-match interview, Fulham captain Tom Cairney joked that he was surprised to see the Portuguese pick up the man-of-the-match award after a frustrating first half, but he turned around his performance in the second half.

His intuition created several chances for the Whites, while his calm, collected finish that won the game was, without a doubt, the highlight of the evening.

Scott Parker: "I'm delighted. We had a tough start to the season away at Barnsley but [the last two games have been] two big results for us and an away victory for us today was positive. I think the Barnsley game was a little bit of a wake-up call…we have a lot of technical players and I think where we fell short, certainly against Barnsley, was in our mentality. Fulham manager Scott Parker, felt his side dominated in their Sky Bet Championship victory over Huddersfield and deserved their win.

"I thought the second half tonight for us was exceptional, to be honest with you. I made a couple of tweaks at half-time and I felt that, at times, we cut through them, got our dangerous players on the ball in the right area, took massive risks in the way that we play and I think that's what pleases me most."

How much pressure was Jan Siewert under?

Prior to his sacking, which was announced an hour after the full-time whistle, the pressure was growing on Jan Siewert after a winless start to the season. Speaking on Sky Sports after full-time, former Derby, Stoke and Birmingham boss Gary Rowett gave his thoughts on the situation.

He said: "It is a lonely place and there are times when, as soon as that whistle goes, you want to get down that tunnel. We've spoken about how early it is in the season but you can hear the fans reaction because this is a fallout from last season as well.

"It's a time when you've got to stay calm, got to stay focused - in the interviews before, he was certainly doing that - and have a belief in what you do. The big thing for me is that you have to try and make the game happen and I just felt today they were a little bit passive at times."

Both sides are in action on Wednesday evening, when Huddersfield face fellow relegated side Cardiff and Fulham host Millwall at Craven Cottage. Both games are available to watch on Sky Sports Football via the red button.