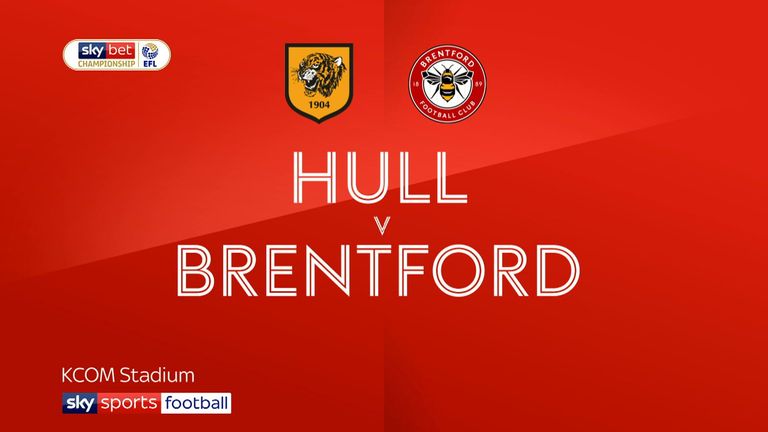 Highlights of the Sky Bet Championship clash between Hull and Brentford.

Brentford's alarming run of form was compounded by a 2-0 defeat at Hull.

The visitors could not recover from Fraizer Campbell's first-half double which intensified the pressure upon head coach Thomas Frank. Frank has now won just once from 10 games since he replaced Dean Smith at Griffin Park.

And this latest reverse was a neat symbolism of Brentford's deficiencies. Frank's men always looked a threat going forward, but they once again defended like amateurs against their grateful hosts.

Hull are not without their faults, either, but manager Nigel Adkins will be thrilled with his side's current position in the Sky Bet Championship. They have lost just once in eight games and have now gone above Brentford in the table.

It was, however, perhaps a surprise that Hull started so sluggishly. Said Benrahma set the early tone for Brentford when his right-footed, curved strike dribbled just wide after four minutes.

But Brentford's defensive issues were once again exposed as the home team took the lead with their first meaningful attack after 12 minutes.

There was, though, an element of fortune about the goal as Kamil Grosicki made a hash of Markus Henriksen's looping cross with a scuffed volley from the right of the penalty area.

Yet the ball spun away from goalkeeper Daniel Bentley and fell to Campbell, who could not miss.

Brentford looked shell-shocked, and fell further behind after 21 minutes - in similar circumstances to which they first conceded.

Henrik Dalsgaard could not live with Grosicki on the left flank as the Poland international charged into a dangerous central position.

Grosicki's low, angled drive was this time much cleaner, and Bentley could only parry the ball to Campbell, who was again in the right place to score.

Campbell might even have scored a first-half hat-trick seven minutes later when he screwed a volley, following Dan Batty's inviting cross from the left, well wide.

Brentford nonetheless remained a fairly potent force going forward. And they came close to halving the deficit after 32 minutes.

Lovely interplay between Oliver Watkins and Nico Yennaris saw the latter let rip with a decent shot to which goalkeeper David Marshall was equal.

Marshall was the busier of the two goalkeepers after the restart, but, in deteriorating conditions, noteworthy chances were few and far between.

That was until the 67th minute when Neal Maupay bustled into Hull's box and teed up Benrahma in front of goal.

The Algerian got it all wrong, though, and carelessly skied the ball over the crossbar.

Benrahma then nearly made amends with a crafty 73rd-minute free-kick which skimmed close to the left-hand corner of the net.

Brentford controlled the rest of the game, but they could find no way of penetrating a strong and resilient Hull defence.

Nigel Adkins: "We knew it was going to be a challenging game, but we've kept the forward momentum going. That was a very good, professional performance. Brentford are an excellent side who pass the ball around really well.

"Yes, we defended deep, but we defended really well. And if we tried to play expansive it might have been a different scoreline. We have showed there's different ways to win a game of football."

Thomas Frank: "We are worried - if you only win one in 10, that's clear. We need to look at ourselves, but you can see the effort they put in.

"You can't ensure anything in the world, but I am 100 per cent sure that me, the players and the coaching staff will do everything we can to turn it around. One win will do massively."