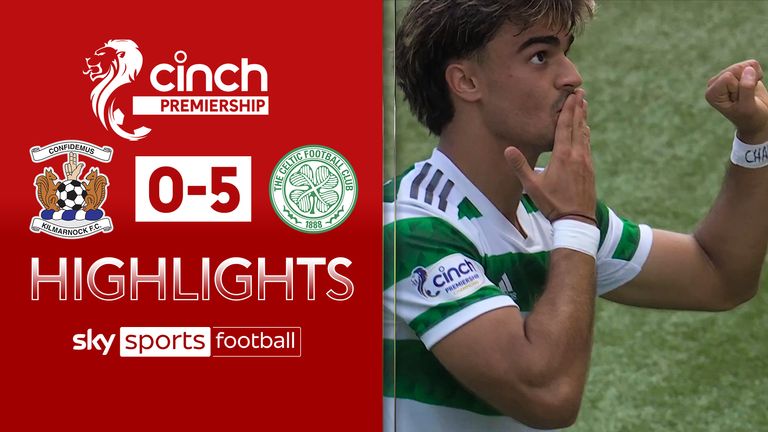 Celtic cruised to a 5-0 win at Kilmarnock as the Scottish Premiership champions maintained their 100 per cent start to the new season.

The visitors took just seven minutes to make the breakthrough thanks to Kyogo Furuhashi's tap-in, before Jota doubled their lead with another spectacular long-range strike.

Two soon became three as Moritz Jenz continued the eye-catching goals with the German defender finding the net with an acrobatic overhead kick to put the match already out of the hosts' reach by half-time.

And it was more of the same in the second half as a relentless Celtic went in search of more goals, which duly arrived from substitutes Carl Starfelt (76) and Giorgos Giakoumakis (82) with yet another brilliant effort to round off the scoring.

As a result, Ange Postecoglou's side go top of the table on goal difference from Rangers, while Killie stay in 11th place as their search for a first victory of the new campaign goes on.

Man of the match: Jota

An unchanged Celtic side took less than seven minutes to break down their hosts, with former Killie left-back Greg Taylor playing a crucial role. 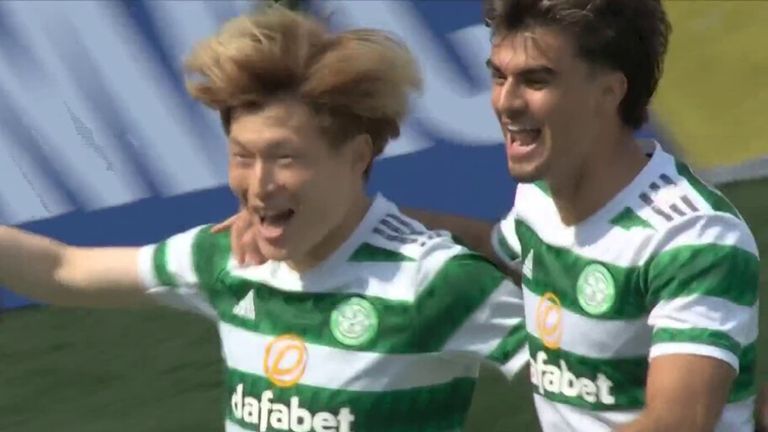 Taylor's pass inside Fraser Murray sent Daizen Maeda through the left channel and he squared for Furuhashi to finish off the post. 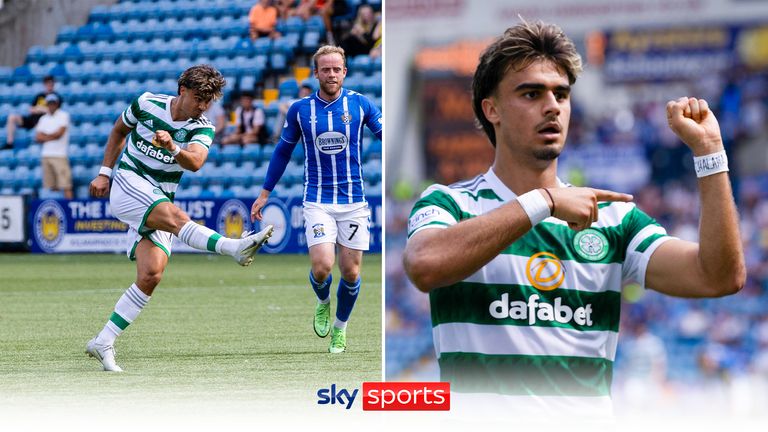 The visitors remained in control but Killie had a couple of half chances just before a water break. Kyle Lafferty sent a weak effort straight at Joe Hart from 25 yards after Oli Shaw had got the better of Celtic's centre-backs, before Murray curled just beyond the far post. 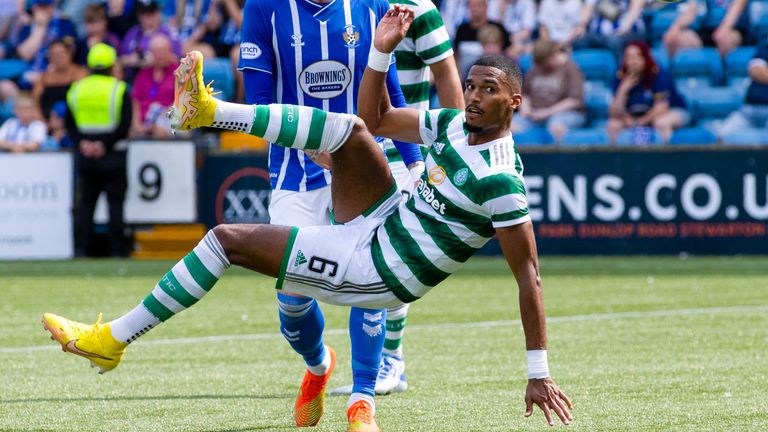 Moritz Jenz scores with an acrobatic scissor-kick to put Celtic 3-0 up against Kilmarnock.

The second goal came out of nothing in the 35th minute. Jota collected a pass from Maeda and unleashed a powerful strike from at least 30 yards which flew into the top corner. 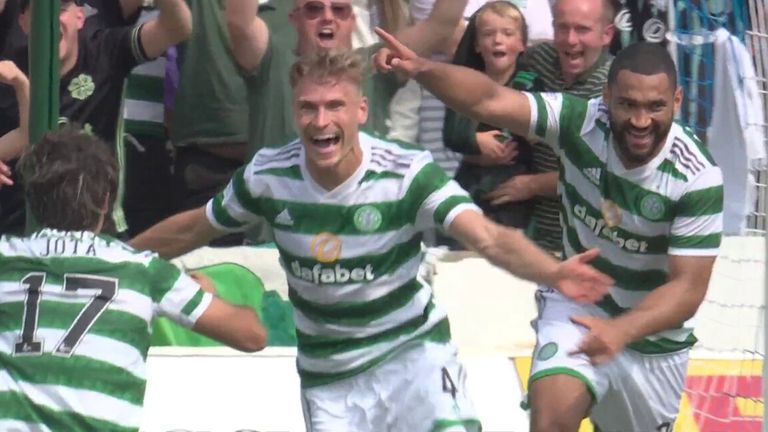 Carl Starfelt scores his first Celtic goal to make it 4-0 against Kilmarnock.

Jota soon had a chance to set up Madea, but opted to shoot and was denied by Sam Walker. Killie left-back Jeriel Dorsett injured himself trying to track back following Furuhashi's pass inside him and was replaced by Calum Waters. 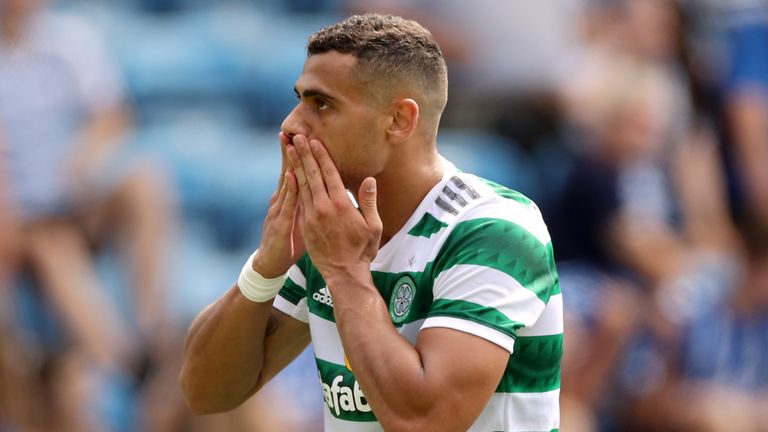 Callum McGregor's deflected shot broke for centre-back Jenz, who showed a striker's instinct to hook the ball home on the turn.

Oli Shaw forced Hart into a diving save after latching on to a high ball from the restart, but that was Kilmarnock's last effort of note.

Furuhashi headed against the bar following Turnbull's free-kick early in the second half.

Starfelt made his first appearance of the season after Jenz walked off after receiving treatment and was soon involved in a flashpoint when Lafferty went down inside the box. The former Rangers striker claimed a penalty, but was instead penalised for backing in, and was booked moments later following an aerial clash with Taylor.

Postecoglou made a triple change midway through the half as Giakoumakis, Aaron Mooy and Liel Abada injected more energy into Celtic's attacking play.

Starfelt scored at the second attempt from close range in the 76th minute after Sam Walker had parried Cameron Carter-Vickers' corner.

And Giakoumakis finished brilliantly six minutes later after throwing himself into the air to meet a headed clearance.

'I'm embarrassed, but we need to dust ourselves down'

"For all the talent Celtic have, I was disappointed with the level of goals we lost.

"Two corner kicks, three goals in the six-yard box. I need to see the Jota goal again but my first thought is we should have saved it.

"Other than the Giakoumakis overhead kick, there were no real goals defined by the difference in quality. It was more our responsibility and lack of willingness and resolve to deal with that situation. That's what I'm more concerned about.

"It still shouldn't be 5-0, even though we're not ready to take on a Celtic, that's what I'm disappointed with.

"I'm embarrassed by it, but we need to dust ourselves down and hopefully by the time we play the Old Firm next time around we're more settled into the Premiership and better equipped to get a better result than we were today."

Derek McInnes says despite competing well against the champions, overall he was disappointed with Kilmarnock's performance against Celtic

'The quality of our general play attacking-wise was good'

"We spoke about it before the game. It wasn't the easiest of conditions for our boys to play football both in terms of the temperature and the pitch.

"To the players' credit they kept their discipline and focus and committed to our style of football.

"There were plenty of excuses for us to just look at this game as 'three points and get up the road' but we still wanted to put on a performance and I was pleased that the players did. 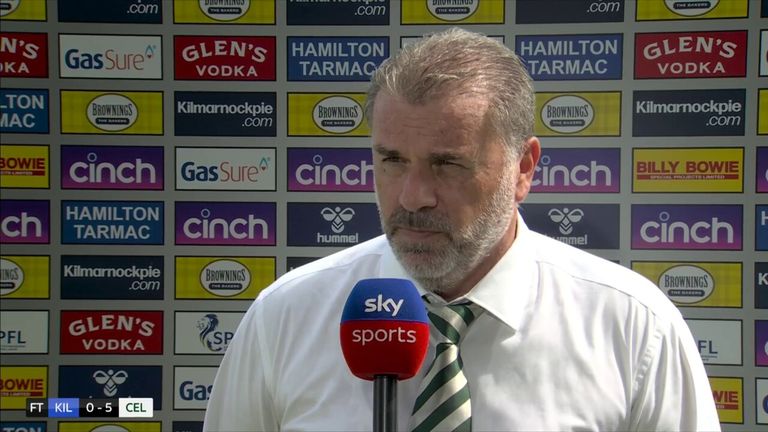 "I've always said it, Celtic are at their best when the opposition have got the ball because they win it back so fast, and then the transitions they break and they break the lines and they are still very, very dangerous.

"So when the opposition get on the ball, when Kilmarnock had the ball today, all of a sudden Jota is ready to go when Celtic win the ball back, and they hunt in packs, there is a like a trigger - McGregor will go, then O'Riley will follow him and then the back four will come up.

"When they get the ball, they break so quickly and they have so much threat going forward and I like the point the manager makes about the goals, it was five Celtic players last season who got into double figures - Giakoumakis, Kyogo, Turnbull, Jota and Abada - and that takes huge pressure off your front players if you can get goals from other areas of the pitch."

Man of the Match: Jota

Celtic decided to trigger Jota's buyout clause in July to sign the forward permanently from Benfica after an impressive campaign on loan with the club last season and that already looks like a smart decision by Postecoglou.

The Portuguese grabbed 13 goals in 40 appearances in all competitions to help Celtic win the Scottish Premiership last season and he has started this campaign in a similar vein of form.

The 23-year-old scored a spectacular strike in the champions' opening-day win over Aberdeen and he was at it again at Rugby Park on Sunday, doubling the visitors' lead with a wonderful long-range effort.

And keeping Jota fit and healthy between now and the end of the season could be key to a successful title defence for Postecoglou. 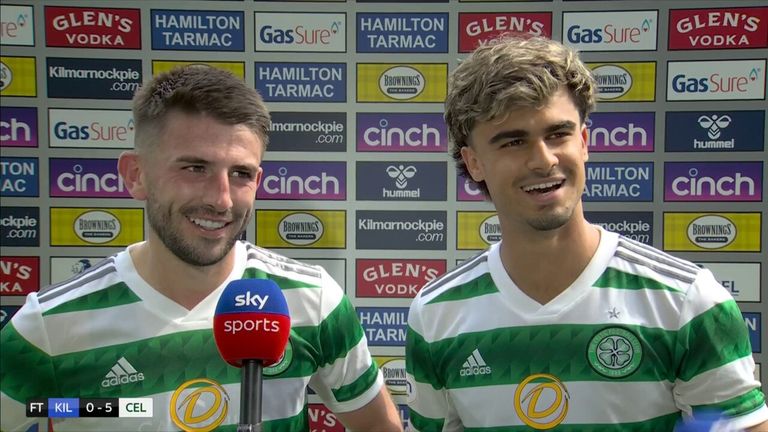 Kilmarnock are away to Ross County in their next Scottish Premiership match on August 20.

Celtic face Hearts at Tynecastle Park the following day. Both games kick off at 3pm.