FREE TO WATCH: Highlights as Liverpool beat Brighton 2-1 to move 11 points clear at the top of the Premier League

Liverpool avoided a big late scare with 10 men to hold on for a 2-1 victory over Brighton, stretching their lead to 11 points at the top of the Premier League.

Two Virgil van Dijk headers put Liverpool in control in the first half, first from Trent Alexander-Arnold's free-kick (18), and then from the full-back's corner from the left (24).

But the mood changed with 15 minutes remaining when Alisson was dismissed for a handball outside of the box, and from the resulting free-kick, Lewis Dunk halved the deficit, bizarrely catching sub Adrian out as he was organising his wall (79).

Liverpool were nowhere near their best throughout, but eventually held on, going into a chaotic December schedule with an 11-point lead over Man City. Leicester, also 11 points behind, make up their game in hand against Everton on Super Sunday.

Man of the match: Lewis Dunk

How Liverpool squeezed through after fright

The Anfield crowd were in a good mood and good voice even before kick-off with the news that Newcastle had drawn late on against Manchester City, and Liverpool didn't leave it long to take advantage.

After Mat Ryan did well to deny Roberto Firmino's low drive from 16 yards, he couldn't keep out Van Dijk's looping header from a deep Alexander-Arnold free-kick from the right.

Ryan's double save kept the score down shortly after, first from Firmino at the near post, and then from Sadio Mane as he found himself in acres of space at close range.

But it was that combination of Alexander-Arnold and Van Dijk again to put Liverpool 2-0 up; the full-back's wicked corner met Van Dijk, who had risen above Dunk and powered a header beyond Ryan at the near post.

Brighton reacted well, and should have halved the deficit as Lewis Dunk somehow shinned a shot wide unmarked and onside from eight yards as Liverpool's high line was breached with ease.

Dunk glanced just wide after the break from a Pascal Gross corner, before the defender himself made three vital blocks at the other end within two minutes to keep Brighton in the game.

Liverpool left the door ajar on several occasions, but it was flung open by Alisson in the closing stages, handling outside of his box as Leandro Trossard looked to lift the ball over him.

Liverpool made three changes following the 1-1 draw against Napoli as Alexander-Arnold, Wijnaldum and Oxalde-Chamberlain came in for Gomez, Milner and the injured Fabinho.

Brighton made four changes after the defeat by Leicester; Dunk, Bissouma, Gross and Connolly came in, replacing Duffy, March, Trossard and Maupay.

From the resulting free-kick, Martin Atkinson allowed Dunk to pass in a low, 30-yard free-kick, with sub goalkeeper Adrian still arranging his wall - much to his subsequent fury.

Brighton piled forward late on - Aaron Mooy forced a good save from Adrian, before the goalkeeper had to recover at the second attempt having fumbled Gross' header - but the leaders eventually held on.

Jurgen Klopp was visibly ecstatic at the whistle, more out of relief than anything, as Liverpool once again ran out narrow winners without being at their usual, slick best. They go into a packed December with a big cushion and momentum, but knowing it could have easily been less.

Liverpool boss Jurgen Klopp: "I'm very, very happy with the effort the boys put in again. I'm really happy and proud of the desire the boys showed. The red card made it a really special win, to be honest. Results-wise, it's an incredible period, for sure. But we don't want to think about the last 14 games. We are concerned about the next one, that's next Wednesday against Everton, so that's a big one. 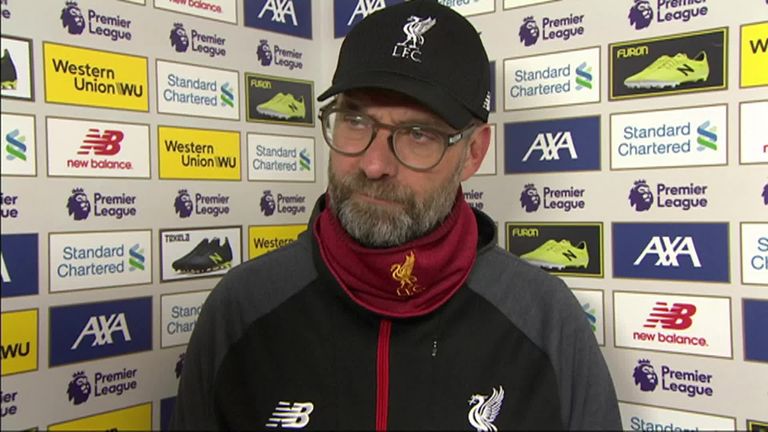 Jurgen Klopp insists he's not focusing on the table, despite seeing his Liverpool side move 11 points clear

"We don't think about the points gap or anything. People are talking tonight about us being 11 points ahead, but Leicester play tomorrow, so it's still eight, that's how I see it - not that I don't think Everton can win there."

Brighton boss Graham Potter: "Over the course of the 90 minutes, we did a lot well. We showed a lot of personality, a lot of courage and a lot of quality against a really, really good team. You always know that when you make a mistake, they can punish you. Any break is so dangerous. We have lots to be positive about but we are still disappointed to come away with nothing." 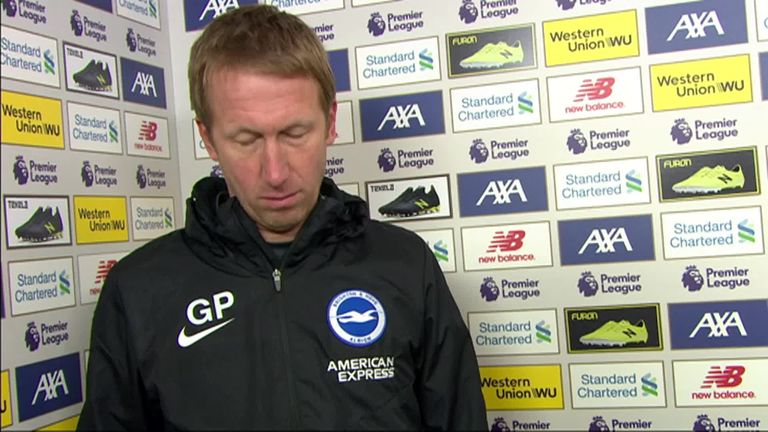 Liverpool now host Everton in the Merseyside derby on Wednesday night at 8.15pm, before going to Bournemouth on Saturday at 3pm. Brighton are at Arsenal on Thursday at 8.15pm, and then host Wolves at 4.30pm on Super Sunday, live on Sky Sports Premier League.