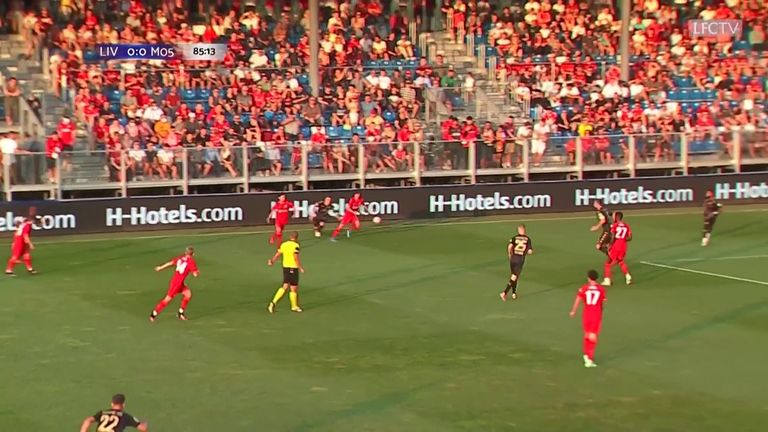 Liverpool have continued their pre-season preparations with a 1-0 win over German club Mainz. Pictures from LFC TV. All upcoming pre-season games will be shown live on LFC TV.

A late own goal gave Liverpool a 1-0 win over Bundesliga side Mainz in their first full pre-season game in Austria.

Alex Oxlade-Chamberlain missed the best chance of the first half, seeing his effort in the box saved well by Robin Zentner, before Liverpool changed all 11 players at half-time at the Goldberg Stadium in Grodig.

Mainz had chances of their own in a dull second half, as substitute goalkeeper Adrian tipped over Dominik Wanner's brilliant volley direct from a corner, before Luca Kilian failed to get his feet right as he diverted Owen Beck's left-wing cross into the net (87).

Liverpool's next pre-season fixture comes against Hertha Berlin in Austria on Thursday.

Bundesliga side Mainz, who are two weeks further in their preparation for the new season, looked energetic in the first half hour, but created little in the way of clear-cut chances to trouble Caoimhin Kelleher's goal.

Liverpool began to turn the screw late in the first half as good work from Harvey Elliott and Mohamed Salah on the right flank created a chance for Sadio Mane, but his poked effort at the near post was turned away by Zentner.

Zentner was tested again moments later as the impressive Naby Keita did well to find Oxlade-Chamberlain on the left of the box, but as he opened his body up looking to slot into the far corner, the Mainz goalkeeper did well to tip behind.

Jurgen Klopp changed all XI players in the second half, giving a rare opportunity to Billy Koumetio, Leighton Clarkson, Kaide Gordon, Owen Beck and Tyler Morton, but like the opening periods of the first half, the game struggled to get going.

Mainz substitute Tauer had a fine chance to open the scoring, receiving the ball on his chest in the box, but his bizarre finish was weak enough for Liverpool to clear with ease inside the six-yard box.

Wanner's superb volley from a drilled corner forced Adrian to tip over the bar with 10 minutes remaining, before Liverpool got their winner in bizarre fashion.

Beck was played in behind on the left channel by Divock Origi, and his dangerous cross was turned into his own net by defender Kilian, who could not get his feet right with Gordon behind him.

Mainz nearly levelled a minute before time through youngster Timothe Rupil, but his free-kick was held well by Adrian.

"I am happy about a lot of situations I saw. First half I saw some really good football, we passed the ball quite quickly against a good organised side, a good defending side. It was far away from being perfect, but it is absolutely OK.

"Organisation-wise it's not even close to where we have to be, but how is that? When you are tired you try to bring the best organisation possible on the pitch, it's never about 100 per cent. I think the boys did that today, and so I am happy

"Nobody injured, which is important, everybody came through, so fine."

Will Virgil van Dijk or Joe Gomez feature against Hertha Berlin? "It would still be a surprise, unfortunately. They look really good. But look, they do everything, they play football, we do the things we can do, they don't do too much, we just have to be patient.

"We prepare for a full season, not a pre-season game. I will not risk it for a game here. We have a lot of games still coming, but I don't see them being involved for the next one."

Analysis: All eyes on Konate, but Keita and Gordon impress

"Liverpool were never going to run rings around a side two weeks further in their preparation for the new season, and the old adage "performances don't matter in pre-season" is necessary here.

"This was a really dull affair for large parts, lacking in flow and rhythm, but there were a handful of things Jurgen Klopp will be delighted with.

"Naby Keita, who needs to reignite his Liverpool career, was the brightest player in the first half, showing brilliant skill and close control on several occasions to get out of cul-de-sacs and create. Harvey Elliott, too, impressed, and was singled out by Klopp for praise.

"On his proper debut, all eyes were also on Ibrahima Konate, and this was a 6/10 performance from the 22-year-old. A sloppy concession of possession, followed by a brilliant recovery to win the ball back, just about summed up his 45 minutes.

"The second half brought Liverpool's average age down considerably, and though Owen Beck will get the plaudits for 'setting up' the own goal winner, 16-year-old Kaide Gordon impressed most.

"Gordon chased everything, nearly promoting a howler from the Mainz goalkeeper as he pursued a back pass, looked pacey and even produced a quite superb, bold dummy to create a chance for Divock Origi late on.

"It's difficult to draw too many conclusions from two lots of 45 minutes, but Klopp's glass was half full rather than half empty."

First up is Robbie Fowler - The boy from Toxteth who became 'God', featuring interviews with Jason McAteer, John Barnes, Emile Heskey and more.