Match report as Liverpool complete their pre-season schedule with 3-1 victory over Osasuna; Roberto Firmino scores twice to add to Takumi Minamino's opener; Jurgen Klopp confirms Andrew Robertson could be out until after international break 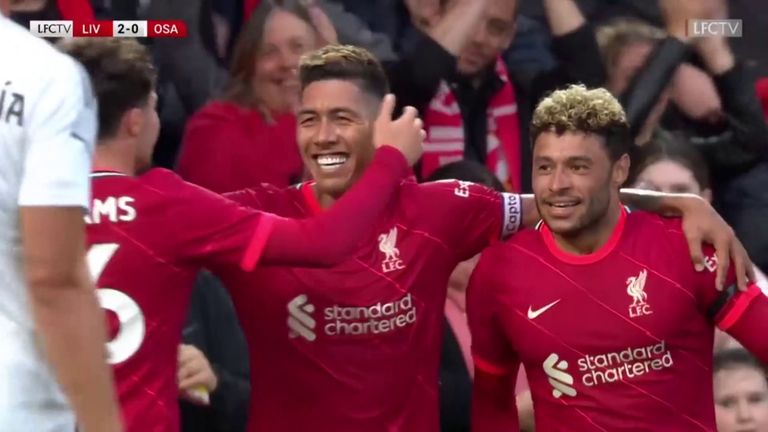 Roberto Firmino scored twice with Takumi Minamino getting the other as Liverpool wrapped up their pre-season schedule with a 3-1 win over Osasuna. You can see more highlights and interviews from Anfield on LFCTV. (Credit: LFCTV)

Liverpool signed off their pre-season preparations with a convincing 3-1 win over La Liga side Osasuna at Anfield on Monday night.

Twenty-four hours on from the 1-1 draw with Athletic Bilbao, this was an opportunity for some of the fringe players to stake their claim and Takumi Minamino did just that as his strike gave the hosts an early lead (14).

Minamino was lively throughout as a one-two with Kostas Tsimikas allowed the full-back to cross for Roberto Firmino to double the lead (21), and the Brazilian added a third four minutes before the break.

Kike Garcia reduced the deficit (71) during a second-half disrupted by a raft of substitutions but Jurgen Klopp will feel he has the depth to mount a sustained Premier League title challenge on this evidence.

Man of the match: Alex Oxlade-Chamberlain.

How Reds ended pre-season in style

The kick-off at Anfield was once again delayed for 15 minutes as supporters get to grips with the new protocols on entering the stadium, but once inside, there was a moment's applause in memory of former players Michael Robinson and Tommy Leishman, both of whom passed away in recent months.

Andy Robertson took to social media to show his support to his team-mates while confirming a period out on the sidelines with ankle ligament damage sustained in Sunday's 1-1 draw with Athletic Bilbao.

Osasuna, who finished 10th in La Liga under Jagoba Arrasate, started impressively as Ezequiel Avila nearly set up Barbero from a deep cross inside the opening minute, forcing Neco Williams into a last-ditch clearance.

The visitors continued to impose themselves as the lively Avila then had two speculative efforts off target.

Ibrahima Konate looked composed in possession on his first Anfield appearance, and it was from one of the centre-back's trademark raking passes that Minamino ought to have broken the deadlock on 13 minutes but goalkeeper Juan Perez was swiftly off his line to smother.

The miss didn't play on the forward's mind, however, as moments later, Liverpool were in front.

This time, it was Fabinho who played the perfectly measured through ball and Minamino's drive took a fortunate deflection off Jesus Areso to deceive Perez and find the net.

Jurgen Klopp's men went instantly in search of a quickfire second as Curtis Jones released the 16-year-old Kaide Gordon but his effort that flashed just wide of the post came from an offside position.

Liverpool didn't have to wait too long for a second, however, as Minamino turned provider, playing a one-two with Kostas Tsimikas for the Greek full-back to fire a penetrating low cross for Firmino to guide his first-time effort into the far corner.

Osasuna were by now chasing shadows as Konate continued his commanding home debut, lending the ball to Gordon before drawing a foul. Liverpool worked it quick and worked it left as this time Firmino was unable to keep his header down from Tsimikas' cross.

Jones had already taken a knock to the ribs when a bump to the nose left Klopp unwilling to take any risks as Ben Woodburn replaced him on 31 minutes. It failed to disrupt the hosts as within 10 minutes they were celebrating a third.

Juan Perez had already made a fine double save to thwart the excellent Alex Oxlade-Chamberlain and Firmino, but the Brazilian would not be denied his second when he coolly finished off another sweeping move, taking Minamino's cross on his chest before tucking his finish inside the post.

A raft of second-half alterations would ultimately lead to fewer chances as Osasuna changed their entire XI. Divock Origi was introduced at half-time and ought to have done better when he headed over Woodburn's cross.

Liverpool continued to enjoy themselves as a brilliant backheeled reverse pass from Woodburn led to a Rabona cross from Oxlade-Chamberlain which nearly crept in at the near post.

Sergio Herrera, who had replaced Perez in goal for Osasuna, then denied Firmino a hat-trick as the forward's header from Woodburn's cross was kept out from point-blank range.

It was Firmino's final act as he was replaced with half an hour to go and Thiago was introduced into midfield. Jordan Henderson would later be handed 20 minutes to put his case forward for inclusion against Norwich on Saturday.

Osasuna continued to compete and got their rewards as Kike rose at the far post to wipe out Caoimhin Kelleher's clean sheet.

It was the only blip on a polished final pre-season outing before the real stuff gets underway next weekend.

Liverpool boss Jurgen Klopp told LFC TV: "The first half was absolutely exceptional in many different departments. There were a lot of long ball and I liked our formation around that and how we passed the ball forward with Bobby in between the lines.

"From a speed perspective, we were exceptional today and Ox was on fire. Fab controlled the counter-pressing situations and how it should be. The last line were good, we defended well and the goals we scored were outstanding. The second half was harder but there's nothing really to moan about.

"With all the changes, I didn't feel we really disrupted the rhythm so it was good. Ben [Woodburn] has shown up in a top, top way. In pre-season, he's played in four or five different positions.

"Kostas has also shown up in pre-season as well and on top of that, he's needed as well."

On Robertson's injury: "Not really [can't put a timeframe] but I think we got lucky. I'm not sure if it will be before or after the international break but it won't be long. It could've been a lot worse."

"To be honest, I don't have the words to explain my feelings when I touched my first foot onto the pitch," Konate said afterwards to LFC TV. "I think we did a very good game together.

Man of the match - Alex Oxlade-Chamberlain

There was a real hunger about Oxlade-Chamberlain as the versatile midfielder provided a strong case for being kept on for the coming campaign.

Having seen his minutes limited by injuries and form, Southampton have shown an interest in bringing him back to the south coast ahead of the summer transfer window closing at the end of this month, but Oxlade-Chamberlain showed why he still has a future at Anfield.

"I know Ox so long now and it's not necessary to talk. It's clear he needed a full pre-season," Klopp added. "That really helps and I think he's played all six pre-season games. You can see how much it means.

"Who do we leave out now for Norwich after these two games? That's how it should be. We need to put pressure on each other in a positive way."

Liverpool begin their Premier League campaign away to Norwich on Saturday, live on Sky Sports Premier League and Main Event; coverage starts at 5pm with kick-off at 5.30pm.

Osasuna start their La Liga season on the same day at home to Espanyol; kick-off 4pm.