Match report as Motherwell beat Livingston 2-1 in the Scottish Premiership; Kevin van Veen scored twice either side of half-time; Livi got one back late on through Bruce Anderson 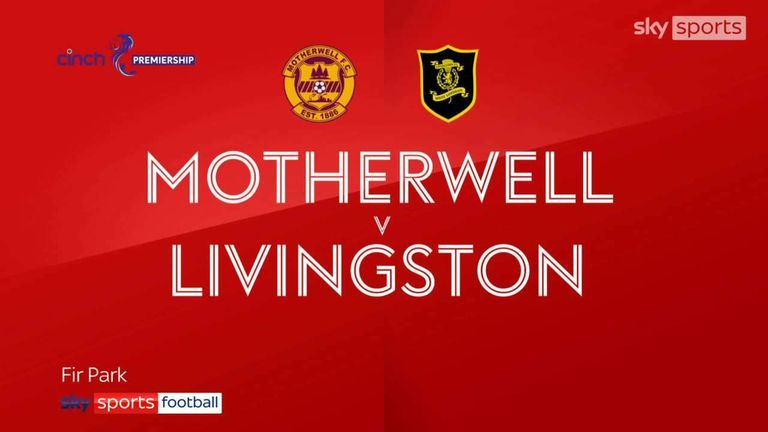 Highlights of the Scottish Premiership clash between Motherwell and Livingston.

A Kevin van Veen double helped Motherwell to a narrow 2-1 win over Livingston at Fir Park.

The Dutchman struck with an early free-kick then grabbed his second with a header midway through the second half to leave Graham Alexander's men in fourth place in the cinch Premiership table heading into the winter break.

Livingston got one back late on through Bruce Anderson but could not find an equaliser and finish 2021 in eighth spot.

Motherwell made two changes from the side that defeated St Johnstone. Out went Tony Watt and Dean Cornelius, replaced by Barry Maguire and Connor Shields.

Livingston similarly changed two from the team that had drawn with Ross County. In came Jackson Longridge and Sean Kelly, with the suspended Nicky Devlin and Jack McMillan dropping out. Assistant manager Marvin Bartley was listed among their six substitutes.

Motherwell went ahead with the first real chance of the game after 13 minutes. Livingston’s Alan Forrest was adjudged to have fouled Nathan McGinley on the edge of the box and Van Veen swept the free-kick into the top corner of the net.

Andrew Shinnie tried to respond with a speculative effort after spotting Liam Kelly out of his box but the goalkeeper got back to block.

Sean Kelly enjoyed a more conventional shot on target in Livingston’s next attack but his brother Liam was equal to his effort.

Motherwell enjoyed one more chance before half-time from another free-kick just outside the box. This time Sean Goss took it and his effort was gathered by Max Stryjek in the Livingston goal.

The visitors threatened once more before the break, too, but Jason Holt’s effort sailed high into the empty stand behind the goal.

The second half opened with another promising Motherwell free-kick after Longridge had been booked for handball. Van Veen stood it over again but this time his effort was deflected over for a corner that Sondre Solholm Johansen headed just wide.

Goss then had a brilliant chance to extend Motherwell’s advantage after being picked out by Kaiyne Woolery but hesitated and saw his shot blocked.

The former Rangers midfielder then had another opportunity to score not long after being set up by Van Veen, but this time Stryjek did well to save with his legs.

A second goal was coming for Motherwell and it was Van Veen who provided it. Shields sent over a cross from the left and the Dutchman rose highest to head past the keeper.

Livingston got one back late on when Anderson turned in James Penrice’s cross before Van Veen came close to landing his hat-trick in the closing moments only to be denied by Stryjek.

Motherwell assistant boss Chris Lucketti: "Kevin [ van Veen] was terrific. It was a real centre-forward's display and his two goals were different class.

"He's a real matchwinner and the free-kick he put in the top corner was special, but he's capable of that. He was probably unlucky not to get another one from a similar position in the second half.

"Kevin also scored with a great header from Connor Shields' superb cross, so you can see why the fans love him.

"He can go from strength to strength because he's getting the rewards for his exceptionally hard work on the training pitch and we're also reaping the benefits of that."

Watt has made clear that he will not sign an extension to his Motherwell contract that expires in the summer.

He has been linked with a move to Dundee United and Lucketti admitted there was a chance the former Celtic striker could even leave next month."

Livingston boss David Martindale: "We got into really good offensive areas in the first half but we never tested the keeper. We never got crosses or balls into the box or any shots off.

"We kept the ball and were decent in possession but there was no cutting edge.

After the winter break, Motherwell travel to Ross County, while Livingston host Dundee, with both Scottish Premiership games kicking off at 7.45pm on Tuesday January 18.