Virgil van Dijk favourite for 2018/19 PFA Player of the Year award: Should he win it?

This week, we assess the leading contenders for the 2018/19 PFA Player of the Year award

Virgil van Dijk is the Sky Bet favourite to win the PFA Player of the Year award, so does he deserve it? What do the stats say? And what's the pundit verdict?

Why does he deserve it?

Well, how long have you got?

Van Dijk may have been in a mix-up with Allison at Fulham on Sunday but he has been imperious for Liverpool all season, his commanding performances inspiring the defensive transformation which has underpinned their Premier League title challenge. Jurgen Klopp's side have kept more clean sheets than any other side and conceded the fewest goals. It is no coincidence that Van Dijk has not missed a game.

The Dutchman has become a leader for Liverpool. His presence in the team lifts the players around him while at the same time giving opposition strikers nightmares. He is so imposing, so defensively faultless, that many have stopped trying to take the ball around him altogether.

The £75m transfer fee Liverpool paid Southampton last January was deemed steep by some at the time, but Van Dijk has justified it emphatically. As well as providing consistent brilliance in the Premier League, he has been vital to Liverpool's Champions League progress. He even scored their second goal in last week's last-16 win over Bayern Munich.

He has become arguably the best central defender in world football this season and he certainly has a strong case for being the Premier League's top performer. No other player has been more influential or important to their team. It is not difficult to see why he is the bookmakers' favourite.

The numbers behind Van Dijk's defensive dominance are extraordinary.

The 27-year-old ranks top among Liverpool players for clearances, blocks, interceptions, duels and aerials this season. Amazingly, despite playing 2755 minutes in the Premier League, he has not been dribbled past by an opponent once. No other outfield player with a minimum of 1000 minutes played has managed that this season.

Van Dijk has hardly put a foot wrong and the statistics prove it. According to Opta, that error at Fulham was the first time he had made an error leading to a goal all season.

Van Dijk has excelled with the ball as well as without it, making more successful passes than any of his team-mates. His total of 2213 puts him second only to Chelsea's Jorginho in the Premier League.

What does his manager say?

"You could write a book about his skills, his strengths, how much I like him, what a fantastic person he is," said Klopp after Liverpool's Champions League win over Bayern Munich last week.

"He's so young, already so mature, so strong, all good."

"I think he should be PFA Player of the Year," Jamie Carragher said on Sky Sports after Van Dijk's recent man-of-the-match performance in the Merseyside derby.

"He looks like a man playing in a kids' game. He's playing against some of the top players in European football in the Premier League, but everything is so easy." 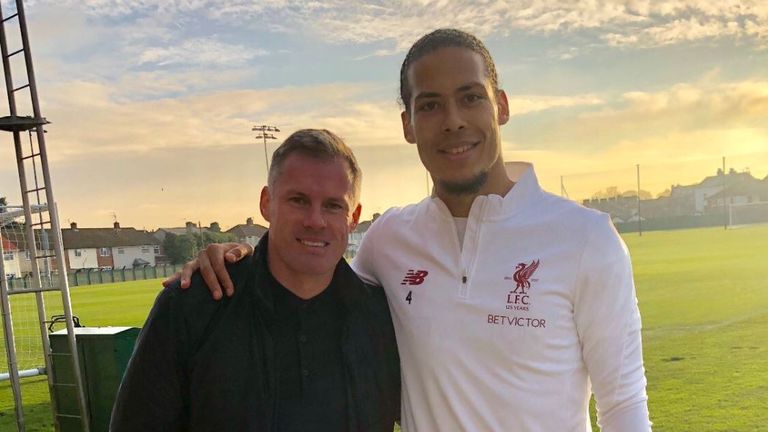 You actually feel like he's not getting tested enough. You still feel like there are more gears for him to go into.

Graeme Souness added: "In a lot of games this year, he has made such a difference to them.

"You can say one player doesn't make a difference, but I think when you are that good, you are an exception. He would be the outstanding centre-half around right now. He's a very special player."