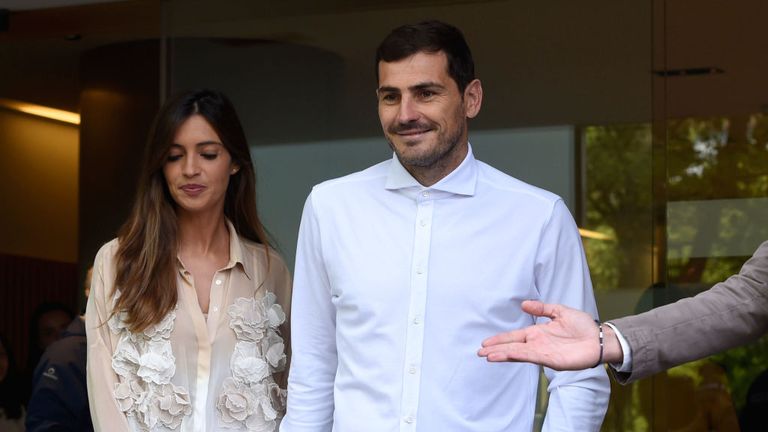 Iker Casillas thanks fans for their support following his heart attack

Porto goalkeeper Iker Casillas has been discharged from hospital five days after suffering a heart attack in training.

Casillas was rushed to hospital on Wednesday morning after suffering an acute myocardial infarction at the club's PortoGaia Training Center in Olival.

The 167-capped Spain international, who turns 38 later this month, underwent a catheterisation and was later discharged on Monday after Porto confirmed the heart problem had been "solved".

"A few days ago I went through a difficult situation, something that can happen at any moment in life, but fortunately I'm fine," Casillas said in a statement on Porto's official website.

"I am grateful and feel that I am very lucky. Thank you to all who cared, for I felt cherished. I can only get out of this situation with a smile.

"I thank all those who helped me and who allowed the effect not to be so serious, because the FC Porto medical team responded immediately.

"I was treated very well in the hospital too. Thank you for the thousands of messages of support and affection I received.

"I feel much better and now it will be rest for a couple of weeks or a couple of months, I do not know, but the most important thing is to be here.

"Thank you all. I do not know what the future will be, but the most important thing is to be here, to be able to speak and tell everyone how I am and how I feel.

"Thank you very much and see you soon."

Porto's club doctor Nelson Puga believes Casillas will make a full recovery, but says it is too early to tell if he will play professionally again.

"It will depend on the medication that he will need to take, on the evaluation of the physical demands of his profession, and also on his will to keep playing," Puga said on Friday.

"Only after carefully taking all that into consideration will it be possible to decide whether he will continue, and whether he wants to continue."

Casillas joined Porto in 2015 after a 16-year spell with boyhood club Real Madrid, during which time he helped the side win five La Liga titles and three Champions League trophies.

He went on to win the Primeira Liga with Porto in the 2017-18 season and was recently awarded a contract extension until the end of the 2019-20 campaign, with an option for another year.