Trent Alexander-Arnold says teams must be punished for racism 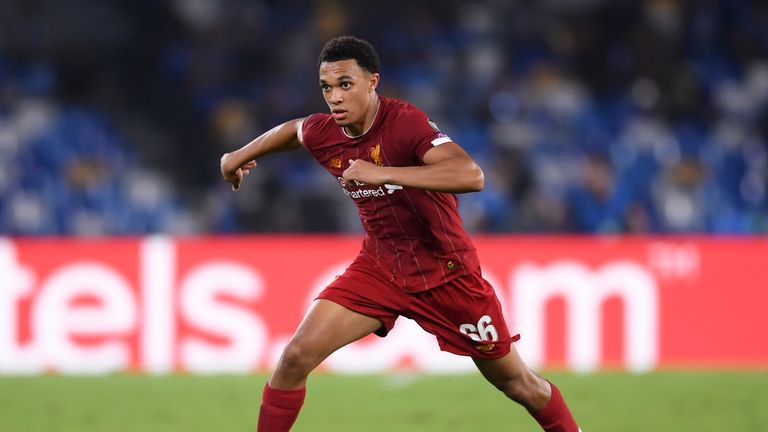 Liverpool's Trent Alexander-Arnold says teams and fans should be punished for racism after monkey chants were aimed at Romelu Lukaku in a match against Cagliari.

The Inter Milan striker was targeted during the 2-1 win over Cagliari on Saturday 1, but the Italian FA's sporting justice panel ruled on Wednesday the chants could not be considered discriminatory in terms of the "scale and realisation".

Alexander-Arnold says all teams and their supporters must be punished for incidents of discrimination at football matches.

"Obviously I think the Italian FA had their reasons for not punishing them [Cagliari] but I think every team should be punished. Every team's fans should be punished for those sorts of actions," the Liverpool full-back said.

"It shouldn't be happening in the game, nowadays especially. I think it's disappointing to see that.

"But I'm sure that Lukaku especially is a strong enough character to break through that, like you've seen straightaway -he scored the penalty and was able to shut the fans up straightaway.

"That was a positive for him and I'm sure he will bounce back from that and keep on doing what he does, scoring goals."

On social media abuse of Robertson

Liverpool left-back Andy Robertson reportedly deactivated his Twitter account after receiving abuse in the wake of conceding a penalty in Tuesday's 2-0 Champions League loss at Napoli.

Alexander-Arnold says the players will rally around Robertson and make sure the Scotsman has all the support he needs from his team-mates.

"He's mentally a really strong character, so I'm sure whatever reason he had for doing that was for the best for him," Alexander-Arnold added.

"So, I think whenever we see each other next, it will be obviously to see how he is, make sure that nothing is too bad. I think all the lads would have texted him and spoken to him, to make sure everything is OK."