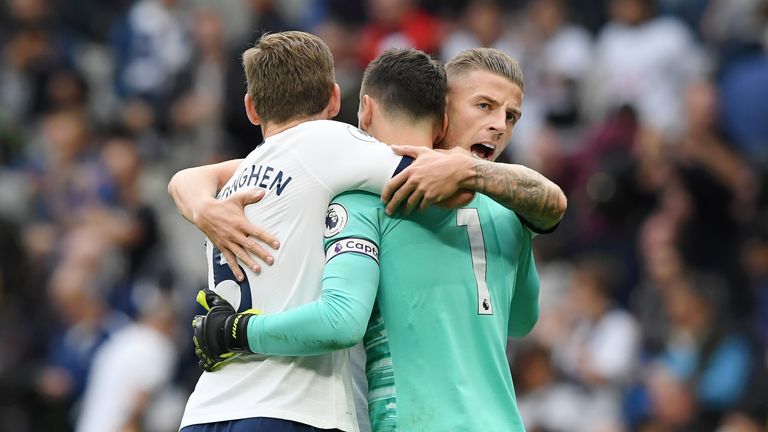 Harry Redknapp says he wouldn’t be surprised to see Spurs return to form against Liverpool on Super Sunday.

Harry Redknapp says his former club Tottenham do not need an influx of new signings, adding they remain his favourites to finish third in the Premier League.

Redknapp also dismissed the suggestion that Spurs should remove manager Mauricio Pochettino from his post as "absolute rubbish".

Pochettino led Spurs to fourth in the Premier League last season and a place in the Champions League final - but their form has been inconsistent this term.

But Redknapp - who took Spurs to a Champions League quarter-final himself - thinks suggestions that Spurs need to spend big in January are wide of the mark.

"Where [would you make signings]?" said Redknapp.

"When I look at the team, they are full of good players everywhere. It is the same group of players - but one or two are not playing as well.

"Dele Alli, I love him, what a footballer, but he has not been in the same form as he showed, maybe over a year ago.

"He comes back to form, he is an incredible player.

"I think they have got the players. They are going through a bad spell but they will come out of that.

"It wouldn't surprise me if it started on Sunday [against Liverpool at Anfield]."

The idea of replacing Pochettino also got short shrift from Redknapp.

"We all get carried away. He (Pochettino) is an excellent manager, he has fantastic players, they have a beautiful stadium. They are just having a tricky spell."

Spurs could give their season a huge boost on Sunday, when they are away to leaders Liverpool, live on Sky Sports.

Redknapp once masterminded a 2-0 Spurs win at Anfield and said: "We had good players, Luka Modric ran the game that day.

"Any game at Anfield is a special game, because for me there is nowhere in the country where the atmosphere is like Liverpool.

"When that crowd sing, for me it is the most moving place to be in football.

"Big game for Tottenham - they have been out of form, but dangerous opposition for Liverpool."

Looking towards the top of the Premier League table, Redknapp added: "It looks like Liverpool and Man City are different class, then you have got Tottenham.

"Chelsea are doing well, Frank (Lampard, manager) has done a great job and will continue to do a great job in my opinion.

"Then you have got Arsenal, I don't know where they are going at the moment. For me, they are nowhere near capable of finishing in the top three, unless the others all fall over.

"And Man United, that's a big rebuilding job for Ole (Gunnar Solskjaer) - so I think Tottenham will finish third this season."

Redknapp says he may yet return to football in some capacity, after his last managerial role at Birmingham City in 2017.

Asked if he would be interested if a post came up, he said: "I'm there, I love it - I had a little spell at Derby, working with (former head coach and current academy director) Darren Wassall.

"Only six, seven weeks but I loved it - couple of days a week, help a young manager.

"It is not the money, it's the buzz. Go on Saturday, watch the team play. I love it, doesn't matter where they are."

You can watch Liverpool vs Tottenham live on Sky Sports Premier League from 4pm this Sunday; Kick-off 4.30pm