Gary Neville & Jamie Carragher talk coaching; "This game is healthy at this moment. I wasn't saying this three or four years ago." 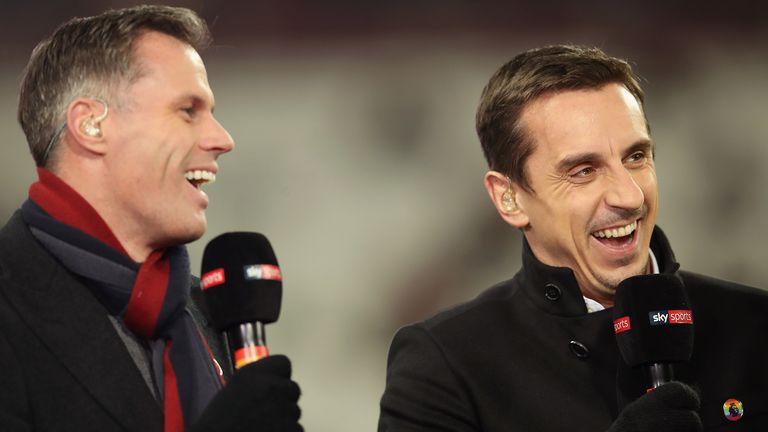 In the latest Off Script, Gary Neville and Jamie Carragher joke about the latter's arrival at Sky Sports in 2013, as well as why English football is so healthy now.

In the latest Off Script, Gary Neville and Jamie Carragher joke about the latter's arrival at Sky Sports in 2013, as well as why English football is so healthy now.

Having experienced some success in Europe in recent years, Neville believes the English game is in a good place on the pitch. He puts that down to the best managers, not just the players, who want to test themselves in the Premier League, as well as young British coaches coming through...

"Forget the players, when we've had the most successful times in European football, it's when we've had the best coaches in this country, not necessarily the best players, because they always tend to go to Real Madrid or Barcelona, the Luis Figos and Zinedine Zidanes in the mid-naughties.

"If you bring Pep here, and Klopp here, Pochettino too, you're going to do well in the Champions League. These coaches are also stimulating our younger British coaches. So we've got the best international talent, young British coaches coming through, and this game is healthy at this moment.

"I wasn't saying this on Sky three or four years ago, I was worried and saying that with the money we were spending, we're not getting the fruits of what we were spending. We are now. There are issues we need to resolve, with racism and other such things, but the game is healthy from a quality point of view. If we get rid of those other issues, then I think we're in a good place.

"I did coaching and punditry when I finished. People who sit there as a coach and say punditry is easy, try it, because there aren't many people who can articulate their thoughts into words so people at home can listen to it well. And people who are pundits who think coaching is easy, go and try to do that, get a message into 20 players on a training pitch of what it is that's in your head! Both are completely different and difficult in their own way.

"But I'm also happy that Eddie Howe, Sean Dyche, Brendan Rodgers - who haven't had the careers that some of those have had - are having good careers. Then you've got Pep Guardiola, Antonio Conte, Pochettino, Wenger, Ferguson, Mourinho - wonderful coaches in this Premier League, and the best coaches are the most important thing to this league."

People who sit there and say punditry is easy, try it, because there aren't many people who can articulate their thoughts into words so people at home can listen to it well. And people who are pundits who think coaching is easy, go and try to do that, get a message into 20 players on a training pitch.

Carra: You've got to have that drive

Carragher admits that many in the Liverpool dressing room would have tipped him to become a coach after retiring in 2013, but he admits a different type of drive is needed to devote your life to coaching.

"Everyone in our dressing room would have said I'd be in coaching or a manager before Stevie Gerrard, or said that I'd be mad about the game, which I still am!

"I don't think it's a case of: 'I've won X, Y and Z, I don't need to do it.' Because it's a completely different thing, just because you're successful as a player, doesn't mean you'll be successful as a manager. When I was finished and looking at Ferguson, Mourinho, Benitez, Wenger, they were the four top managers, and none of them had great careers.

"I do think we have been lucky in that financially you are rewarded when you are a top player. When you go into coaching it's probably then difficult to say to your wife and kids: 'We're gonna move here, we're gonna do this, do that,' when you've actually got a really good standard of living.

"Whereas these managers I've mentioned, the families were probably pushing them on, saying: 'Get out there, this can change our life if you become a top manager!' You've still got that drive! It can change their lives, their experiences, and I always felt that I didn't want to be moving my family around."

Having worked beside each other for six years, we asked Nev and Carra what they first thought when they were paired together in the studio having been enemies on the pitch...

Neville: "I got the call from an ex-producer who said to me that Jamie Carragher wants to come, and that it's a fight between BT and Sky. I was thinking, well, I've been driving that MNF should change every two or three years, and I welcomed it!" Neville joked: "In hindsight, I should have stopped it at the time, put a big cross on it! And there's no doubt that I could have done, with the way MNF was going, it was going pretty alright!

"But I said it should change, it should evolve, and all programmes should evolve! We've got Roy Keane this season, Jose Mourinho, I think it's always good when new pundits join and new people come in, because it stimulates the whole programme. So, I was OK with it! It was a risk, by the way!"

Neville: "Anyone! Haha! I can revel in the thought that I had 20 wonderful years, I don't have to answer this spurious nonsense!"