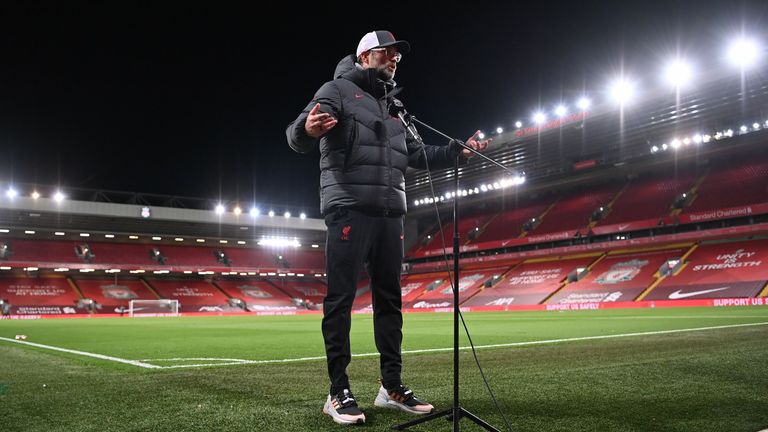 Jurgen Klopp has questioned the logic behind potential 2,000 limits on crowds at Premier League games, as fans wait to find out which tier their clubs will be in on Thursday.

Premier League clubs are expected to welcome back supporters where possible when the Prime Minister reveals the new tiered system to replace the national lockdown - even though it may end up costing them in the short term.

Liverpool manager Klopp welcomed the "good news" but said he did not think the plan had been "thought through".

How many fans will be allowed in?

Thursday's Government announcement on which regions face the toughest restrictions from December 2 is set to open up disparity on which clubs can and cannot immediately reopen their turnstiles.

Gary Neville questioned whether football will become an "unfair competition".

So some clubs will have fans backing them in home fixtures and others will have empty stadiums with no fans! Unfair competition or not??

The Premier League has said its "ambition remains to work with Government to increase attendance to more substantial levels" and having some home fans inside stadia is better than no supporters.

"I don't think it's unfair, it's just the situation," Klopp said. "It's the world at the moment and we cannot change these kinds of things."

Chelsea manager Frank Lampard raised his hopes a "level playing field remains", but believes fans returning in some capacity is a "positive" step.

"If it feels safe and we can start somewhere I think that's the most important thing," he said.

For Tottenham head coach Jose Mourinho, the return of fans is beneficial from an emotional perspective, rather than an economical one. "Looking at the economical perspective it is not good news for any club, but for the passion of the fans, to be able to open the door to some of them, for the happiness of every player, not just those playing at home," he said.

"The best of all is that it is probably the start of it and progressively we can go [towards a] situation closer to what we wanted." Manchester United have prepared to be able to host 23,000 fans when restrictions are lifted, according to United We Stand editor Andy Mitten

Manchester United are ready to welcome back 23,000 socially-distanced fans (one third of the capacity) to Old Trafford, according to United We Stand editor Andy Mitten.

United have been the second most affected Premier League team since playing behind closed doors, with their win rate at Old Trafford down 20 per cent. Only Burnley have a worse drop off (22 per cent).

"I'm seeing figures like 4,000, it's far from ideal but it would make a huge difference," Mitten said.

"I don't think the fans would accept the type of performances against Arsenal and Chelsea at Old Trafford. They would be roaring the team forward.

"The club have been ready to go as soon as they get the green light." 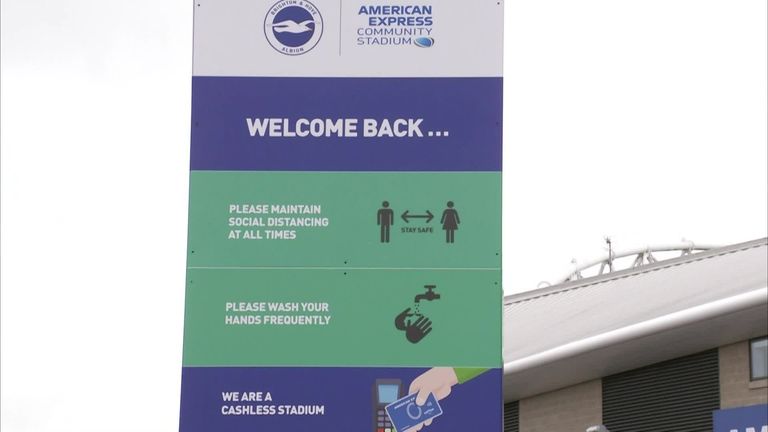 Brighton chief executive Paul Barber hopes the government will increase the permitted number of fans returning to stadia sooner rather than later.

Brighton & Hove Albion chief executive Paul Barber welcomed the news that fans could return to grounds but says the numbers of people attending matches needs to go up as soon as it is safe to do so.

"If we can do that it returns football to a much more viable position than we have been in for some time. We need to prove to Government that we can do it safely and expand those numbers sooner rather than later."