Brazil vs Argentina: Emiliano Martinez and Emiliano Buendia returning to Europe to quarantine in Croatia

FIFA are looking into the Brazil and Argentina match which was suspended after health officials entered the pitch in a row over Covid rules; Sky Sports News has been told Aston VIlla's Emiliano Martinez and Emiliano Buendia will fly to Croatia to train before returning to England 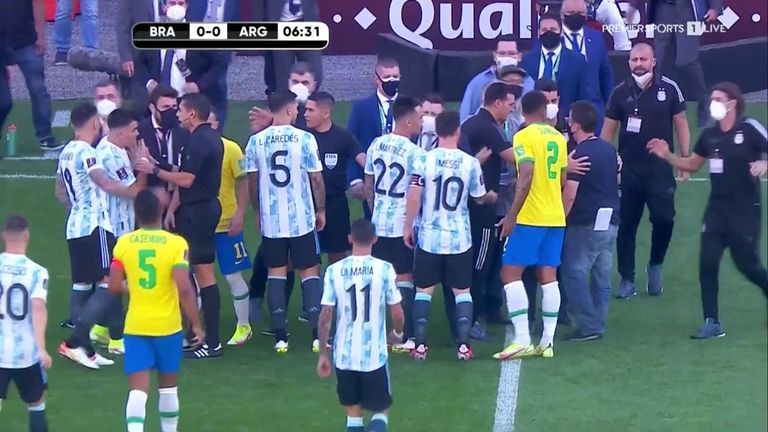 Aston Villa duo Emiliano Martinez and Emiliano Buendia are planning on flying back to Europe on Monday following the controversial suspension of Argentina's World Cup qualifier with Brazil in Sao Paulo.

Martinez started the game in goal and was one of four Premier League-based players who were accused of not following strict Covid protocols upon entering Brazil with the Argentina national team.

As agreed with Villa, Martinez and Buendia were available for selection for the first two matches of the international break for Argentina, against Venezuela and Brazil.

The pair will miss Argentina's third game against Bolivia in the early hours of Friday morning UK time.

Sky Sports News has been told Martinez and Buendia will fly to Croatia rather than the UK, so they can continue training before returning to England for their club.

A trip straight back to the UK from South America would have meant 10 days in government hotel quarantine but stopping off for that period in a green list country means they can train and then travel back to the UK without quarantining.

It means Martinez and Buendia may only miss one Premier League game against Chelsea before being back in the country for Aston Villa's game with Everton on September 18.

FIFA have confirmed they will analyse match reports after Brazilian health officials entered the pitch in a row over Covid rules, resulting in the suspension of the World Cup qualifier.

Although Anvisa did not name the four, the players with Premier League clubs are Buendia and Martinez, as well as Giovani Lo Celso and Cristian Romero of Tottenham.

The South American football confederation CONMEBOL later confirmed the game - which was 0-0 when it was stopped - had been called off by the referee.

Anvisa had sought the immediate isolation of the four players just hours before the game in Sao Paulo.