In an exclusive interview with Sky Sports, the Argentine discusses how the pair could play together, life under Steven Gerrard, his current form and his dream of playing alongside Lionel Messi at the World Cup.

Buendia was named EFL Championship Player of the Season last term after helping propel Norwich to promotion with a league-topping 31 goal involvements, comprising 16 assists and 15 goals.

That form persuaded Villa to splash £35m on the forward, who carried the expectation of filling a gigantic creative void after Manchester City signed club captain Jack Grealish for £100m in the summer. 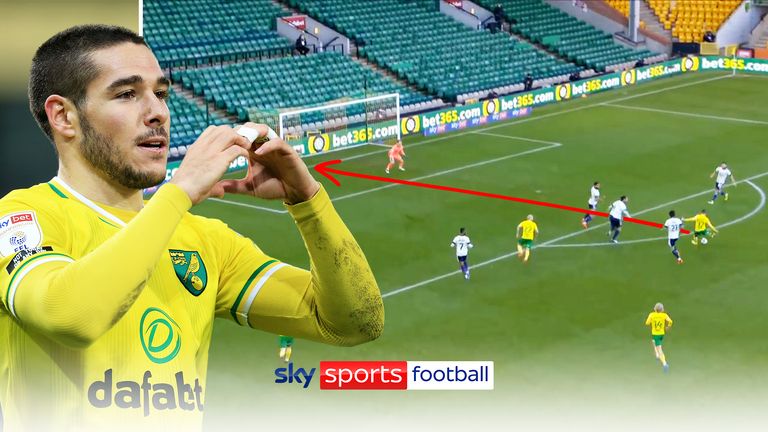 "I didn't take it like [I was replacing Grealish]," says Buendia. "We're different players. He had many good years here and had the chance to move to another club.

"I did my work at Norwich and had the chance to sign at a club like Aston Villa. I take the responsibility to bring my quality and my game to this club and am trying in every way to help the team."

Villa struggled collectively early this season having failed to maintain the momentum from last term which saw the club secure an 11th-placed finish, seven points shy of qualifying for Europe.

"It was tough," he says. "For me, signing at a new club, with the manager who signed me and spoke with me to come here, just working for three or four months and then he has to leave. It was difficult for me and my team-mates, who spent more years with him.

"But we have a new era, new manager, new staff, new style and we are really pleased with this moment. We had the last three defeats in a row but I think the team is showing a different level now, so I think we are moving forward."

What does Gerrard bring to Villa?

Villa then made a statement of intent by replacing Smith with Premier League legend Steven Gerrard, who had earned his managerial stripes by guiding Rangers to their first Scottish Premiership title in 10 years.

"From the first day [Gerrard and staff] came here, they showed their style, how we want to play," says Buendia. "The philosophy to play in the opposition [half], create chances and to play good football, but also taking good care with the ball - trying to create spaces for every player to create the chances and goals to win.

"They're basically the main things - as well as the ambition and the attitude to be the best players and the best team possible."

Buendia has also settled in his surroundings and formed a close relationship with team-mate and compatriot Emi Martinez. "I'm really quiet and shy. I'm a family guy - I like to be at home with my missus and my two kids.," he adds.

"I really enjoy these moments. My [eldest child] is three years old, so I love to interest him with football and he loves going to Villa Park to watch the games. We also hang out with Emi Martinez's family and just chill."

Can Coutinho and Buendia play together?

Despite spending the majority of proceeds from the sale of Grealish last summer on the likes of Buendia himself, Leon Bailey and Danny Ings, Villa have again made headlines in this transfer window with two marquee signings: Coutinho and Lucas Digne.

We are similar players, we want to create and dribble - but we can play together with our team's style and formation

When asked for his impressions of Coutinho as a player, Buendia smiles and raises his eyes in awe: "Of course, a top, top player. He has shown his quality during his whole career - he was the best player at Liverpool.

"He has shown what he can do in this league. He can bring a lot of quality to the squad and to the games, so it's a really good opportunity for everyone here to play with him."

Coutinho is widely regarded as a roaming, creative No 10, and the acquisition seemingly leaves a question mark over the Argentine's starting berth - but Buendia sees it differently.

"Obviously, we are similar players, we want to create and dribble - but we can play together with our team's style and formation. We are quite flexible to play in different roles and positions. So yes, we can play together and I hope to, because I can learn a lot from a player like him." 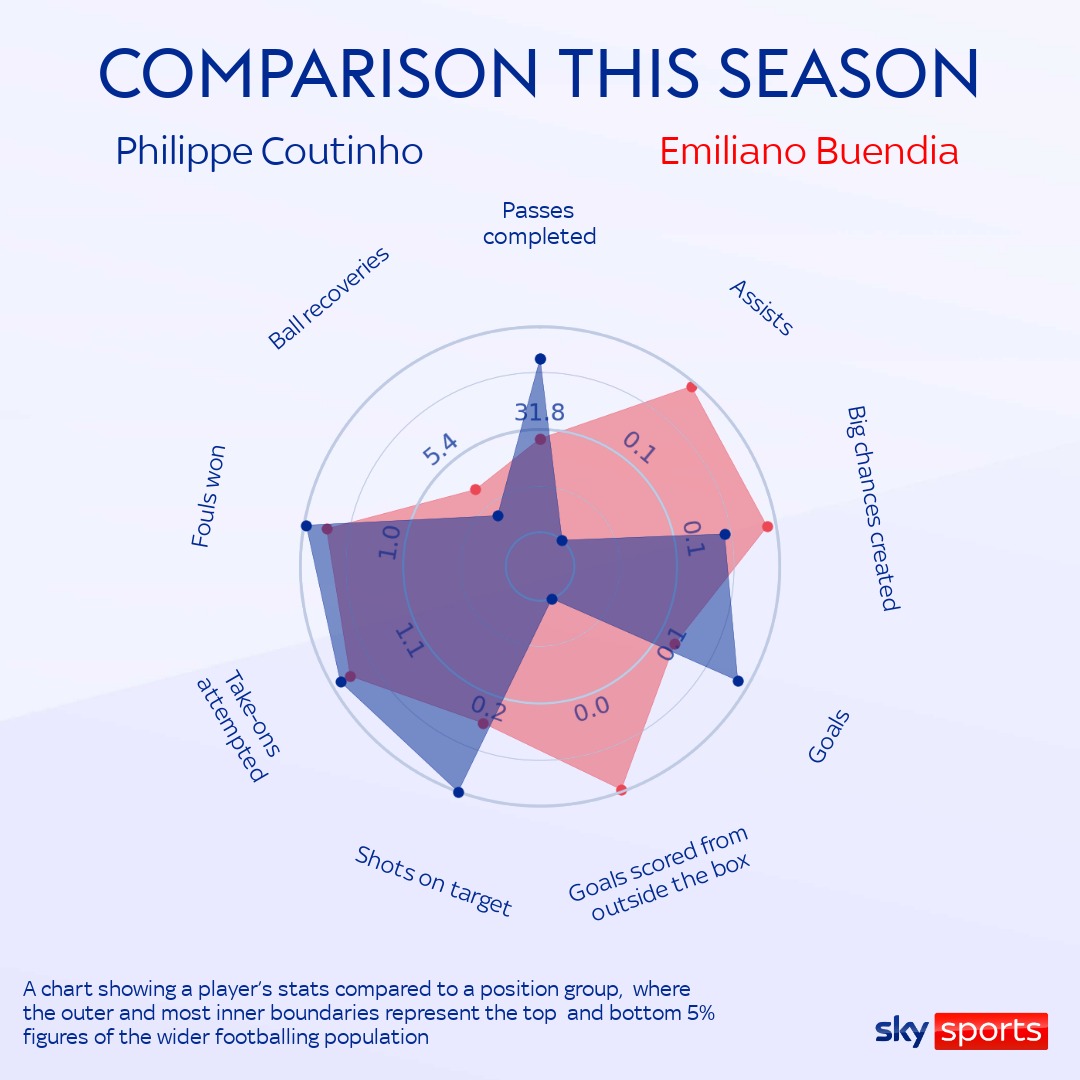 The creative injection was boosted further just six days later when the club confirmed the £25m signing of Everton left-back Digne, who in the last four years has consistently ranked among the elite Premier League full-backs for crosses and assists.

"Another good signing, another really good player. He's shown his quality at Everton - before that with Barcelona and PSG.

"He can create from the left position and has created many, many chances in the Premier League over the years. For our style, he can can create many opportunities for the attackers."

Best yet to come

I want the opportunity to play in the national team with players like Messi - for me, he's the best player in the world

So how does the Argentine feel his first six months have gone at Villa Park? "I'm feeling really good. I'm trying just to feel better every day in training and in the games. I think every game I'm playing I'm showing a slightly better version of myself.

"I also feel good with my relationships with team-mates, and that is getting better because its takes time to [adapt] at a new club.

"I just needed some patience, time and work every day and every week with my team-mates, so I think the best version of myself is coming soon. I can bring many good things to the club."

Yet to earn a senior cap for Argentina, Buendia also has one eye on the World Cup in Qatar this winter and appears focused and determined when outlining his ambitions with the national team.

"Of course I want the opportunity to play in the national team with players like Messi - for me, he's the best player in the world. I've trained with him twice when involved with the national team.

"But I'm really looking forward to being involved again. It's a great year because we have the World Cup, and I'm really working hard to do my best at the club and then, hopefully, having another chance with Argentina."

Buendia ripped up England's second tier from primarily playing down the right flank last season, but the graphic below reveals how Smith sought to use him in a more central role, while Gerrard frequently deploys him down the left channel. So what is his best position?

"Basically, at Norwich I started as a right winger but had the freedom to move around everywhere. Obviously, the style of moving from the wing position to inside gives me the chance to receive the ball [in space].

"But I think it's just a position on paper. I can be flexible and move around in the game to find the best spaces to receive the ball and create.

"At Villa, we are flexible - the three players up front. We can move and switch positions. We can rotate. So it's the game which [dictates] where we play in the moment." 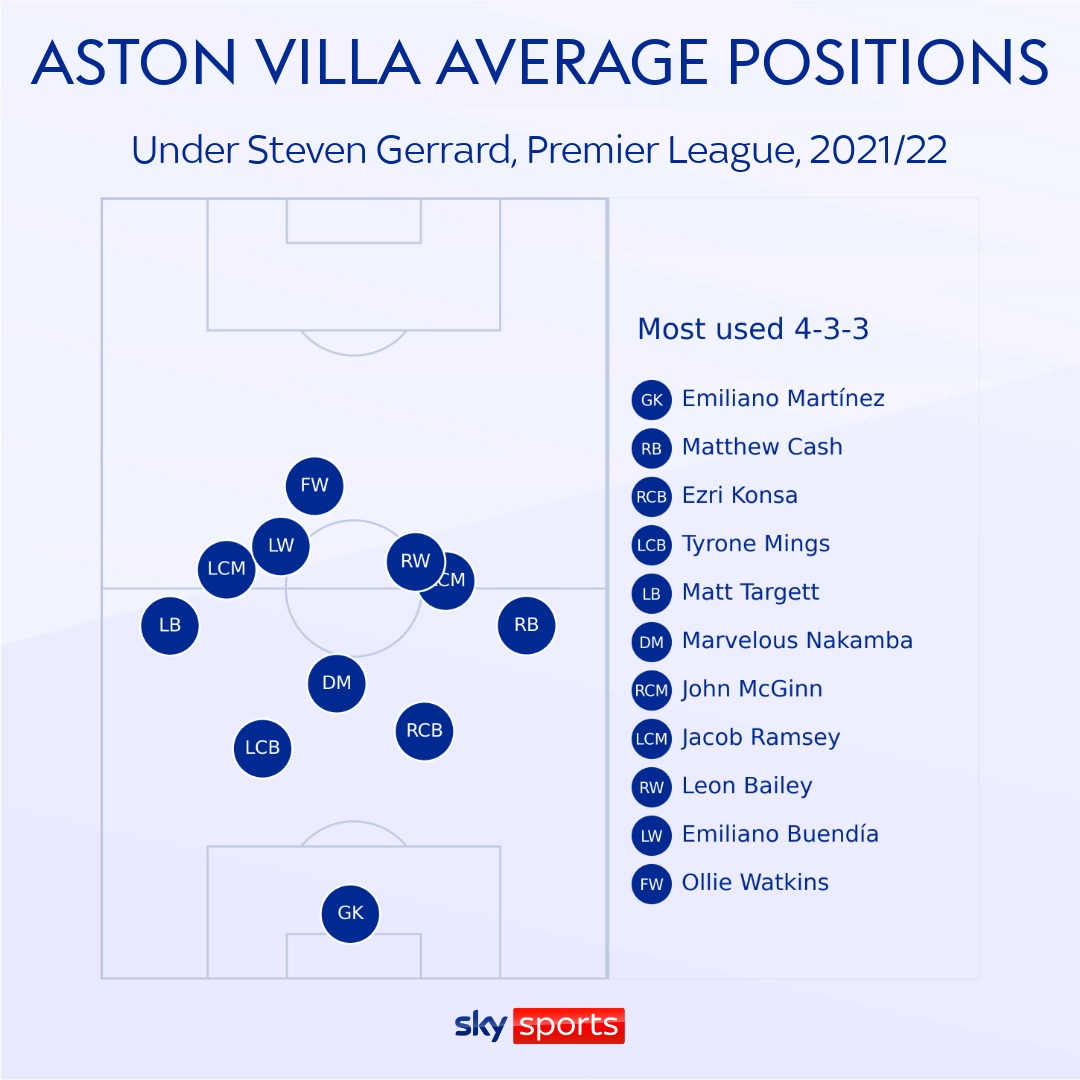 Buendia and co. host Manchester United in front of the Sky cameras on Saturday, just five days after many observers felt they were unfortunate to lose an FA Cup tie at Old Trafford, and the Argentine senses an opportune moment for Villa to capitalise on their visitors' rocky patch under new boss Ralf Rangnick.

"Yes, it's a big chance for us this weekend. We can show everyone where we want to go and our ambition. We want to be in the top half of the table and looking as high as possible for the end of the season."

So can we expect the South American duo of Buendia and Coutinho to start together on Saturday? "I just want to enjoy it with all my team-mates," he replies. "Coutinho is a special player, but we will see!"