Match report as England become the first side to score eight goals in a single Euros match in both the men's and women's competition; the Lionesses have qualified for the quarter-finals as group winners as their better head-to-head record means they cannot be beaten to top spot

England created their own slice of history as a Beth Mead hat-trick helped them to a stunning 8-0 victory against Norway in their second group game of Euro 2022.

No side had ever scored eight goals in a single Euros match in both the men's and women's competition, until the Lionesses ran riot at the Amex Stadium. The victory also sees them through to the quarter-finals as Group A winners, with their head-to-head record meaning they cannot be beaten to the top spot.

While their opening match against Austria was a nervous and rather stilted affair, England finally released the handbrake against a Norway team, who pre-tournament had been talked about as dark horses, with a display that will have many talking about the Lionesses as competition winners.

It was in fact Norway who looked the better in the opening 10 or so minutes as England's predicted toughest game of the group began with some keen defensive work.

But from the 12th minute on, England dominated and did not let up in their mission.

England were awarded a penalty early on as Manchester United defender Maria Thorisdottir clumsily fouled Ellen White. Georgia Stanway lined the ball up on the spot, and despite a slightly extended wait to take the kick, did not break her focus as she powered it past the 'keeper.

Norway had a few half chances between the first and second goal, but England doubled their lead three minutes later. Mead slid the ball across the face of goal, which was expertly back-heeled home by Lauren Hemp and awarded following a VAR check for a wrongly-given offside.

Not wanting to be left off the scoresheet, White netted her first of the evening - and 51st England goal overall - just before the half hour mark. It was Thorisdottir again who was unable to keep the Manchester City forward in check. It was then an easy turn, stride and strike for White.

But it was a seven-minute period where England established an unassailable lead, doubling their already three-goal advantage.

Mead made it four in the 34th minute, with White again winning back possession from Maren Mjelde before laying the ball into Hemp's path. It was then a pin-point cross from one winger to the other as Mead nodded home.

Five minutes later, the unstoppable Mead scored her second of the evening as she dinked past Julia Blaksted and Thorisdottir before coolly rolling the ball past a helpless Guro Pettersen.

White scored her second before the break when she met Fran Kirby's delightful cross in the are with a leaping header, and England ended the first half with six goals.

While there was not as much of a goal-fest after the break, England were always in control, finally imposing the game we know they can play on the biggest of stages. There were, of course, a few more goals to cap off a record-breaking evening.

Alessia Russo scored her first England goal 10 minutes after coming on as a substitute after beating Guro Bergsvand in the air and nodding home the Lionesses' seventh goal.

The cherry on the cake was Mead's hat-trick goal shortly before full-time. Thorisdottir again was at fault, failing to stop Keira Walsh's initial effort and allowing Mead to pounce for a staggering eighth goal of the evening. 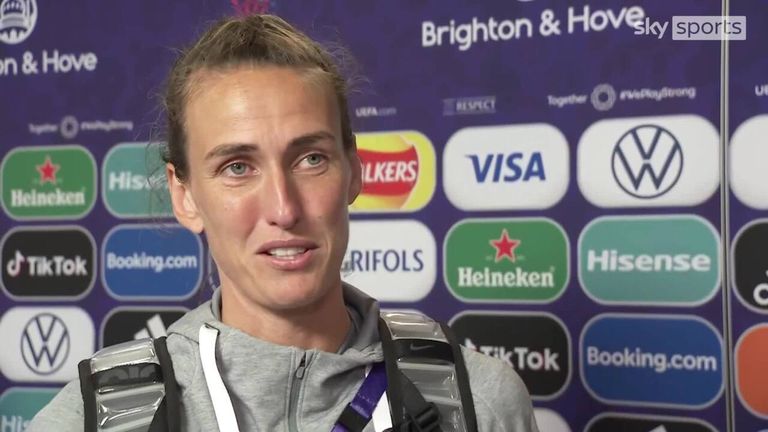 Beth Mead and Jill Scott express their delight over a 'dream' performance against Norway, putting eight goals past their opponents

The result sees England shoot to the top of Group A and straight into the knockout rounds. They will be back at the Amex Stadium next Tuesday to face the runners-up of Group B. Unfortunately for Northern Ireland, the result means they have been knocked out of their first major international tournament after losing 2-0 to Austria earlier on Monday.

England registered a record-breaking victory over two-times European champions Norway to seal qualification as Group A winners. What did we learn from matchday two?

Wiegman: We hope to make nation proud | 'Mead is in great form' 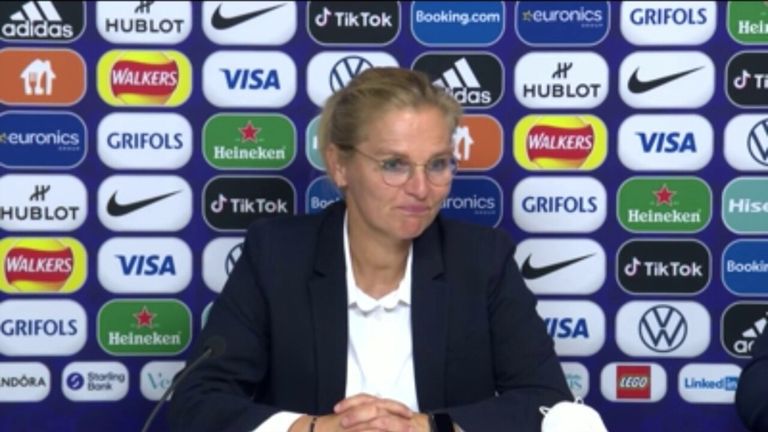 When asked what pleased her most, she replied: "The great win. But also the way we played and kept playing the way we did in the second half, we were already up 6-0 but we still kept the ball going. I did not expect to win 8-0, absolutely not.

"They changed their shape, but we had an answer for that too. I'm really happy with the performance of the whole team and happy to go into the next round.

"We hope they enjoyed and hope to make the nation proud. We've had two games now, we are trying to play our best game and today we did. "We were 2-0 up pretty quickly. Then we got momentum so we could play the possession game, but they had a hard time getting pressure on the ball and we just had so much space to score goals. You could really tell that the players enjoyed it, the ones on the pitch and the ones that came on. We saw after the game that the whole team enjoyed it. It was very nice and we will stay grounded.

"We have seen some big scores, some very good matches so I don't know. I've seen a couple of very good teams that can play high tempo, lots of power.

"So they might be impressed with this performance, but we've seen our opponents have done really well too, so we can expect some very good games coming soon." 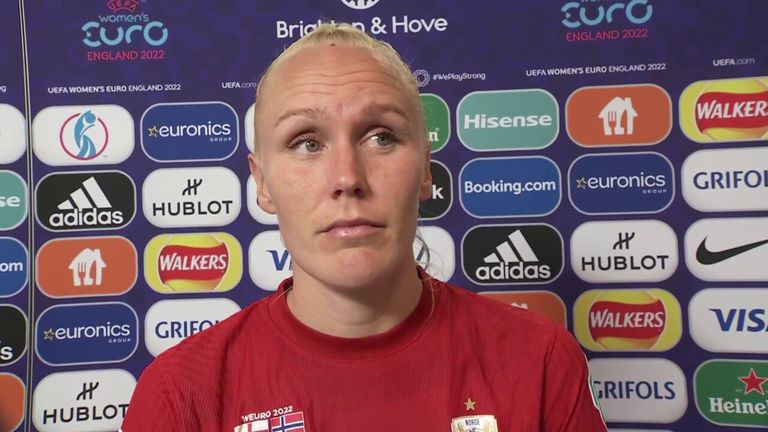 "It's not easy to put into words. Of course everyone felt devastated about the way we looked tonight. I really, really feel terrible for the players' sake, to be out there and to be beaten by England 8-0 in a game we had been looking forward to for quite some time.

"We had a good feeling before the game, we thought we had a good plan, and I thought we played well the first 10 minutes, but then after that, the last 80 minutes was more or less horrible to be honest.

"England played very well. They made it hard for us. We knew beforehand that England was going to come out better than they were in the in the first game against Austria.

"But I also think we made it a little bit too easy for them losing the ball in very, very dangerous places. We didn't really get into all those duels we were talking about. So we made some very bad mistakes.

"But on the other hand, you make mistakes when you play good teams. So, you know, England, they were very good tonight, but we weren't so."

Austria are next for Norway at Brighton's Amex Stadium, with that game kicking off at the same time.