Arsenal became the 17th team to play three at the back this season, while Chelsea are on course to become the first Premier League champions to win the title with the system. We look at the rise of the tactical trend...

On Monday Night Football, Arsene Wenger sprung a surprise and deployed a three-man defence in Arsenal's 2-1 win at Middlesbrough.

It was far from perfect, but helped the Gunners secure a vital three points after a weekend that saw Tottenham, Manchester City, Liverpool and Manchester United each win.

It was the first time Wenger had utilised the system since 1997 but Gabriel, Laurent Koscielny and Rob Holding did enough to keep the Boro attack at bay and end a four-match losing run away from home to keep their hopes of a top-four finish alive.

"It's the first time in 20 years I've played it. It shows that, even at my age, you can change," Wenger said of his decision to field a three-man defence at the Riverside Stadium.

Yet, Arsenal have become just the latest team to use the increasingly popular defensive formation.

Monday night was the 112th time a three-man backline - including those using five at the back - has been deployed in the Premier League this season.

Former Manchester United manager Louis van Gaal toyed with the idea of a three-man defence following the 2014 World Cup, deploying such a setup in the wake of the Netherlands' success on the international stage, and used either a 3-1-4-2 or a 3-4-1-2 formation on 12 occasions in his debut season at Old Trafford, to mixed effect.

However, it wasn't until Antonio Conte moved to Chelsea last summer that the system began to dominate headlines.

The Italian was expected to implement a three-man defence from the get go having routinely utilised the setup during his time for Juventus and Italy. However, Conte initially went with a back four before a 3-0 loss at Arsenal forced him to switch to his tried and trusted formula.

Since October 1, when Chelsea secured a 2-0 win at Hull with three at the back, the Blues haven't looked back since, losing just three of 26 Premier League games in their pursuit for the Premier League title.

As one can expect, they have used the setup more times (26) than any other team in England's top tier this term. 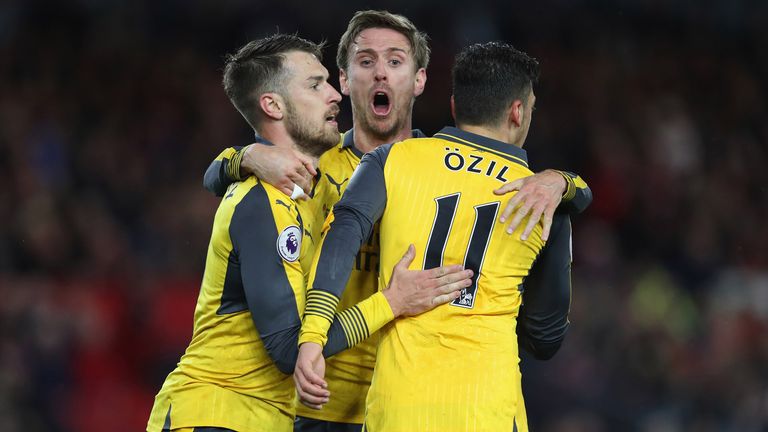 The formation had been used 10 times prior to October 1 by Premier League clubs but Chelsea's success with the set-up appears to have inspired other managers to try three-man defences.

Top seven trio Tottenham, Manchester City and Everton have each used a three-man backline on more than one occasion this season, while 17 of the 20 Premier League teams this term have started with a set-up involving three centre-backs at the heart of the defence at least once.

That's a significant rise from 10 of the 20 teams last season, with West Brom, Southampton and Burnley the three teams yet to start in the system this season.

What's interesting about Saints, though, is that they started in a three-man defence more times (eight) than any other Premier League team last season, with Ronald Koeman's Everton appointment meaning the Merseysiders are the beneficiaries of the Dutchman's tactical flexibility after the Toffees used a three-man defensive system just the once last season.

Having been used just 34 times last season, a three-man backline was deployed in just 4.5 per cent of games in the Premier League in 2015/16, with that increasing to 21 per cent, a significant increase this term.

What's more, teams using a three-man defence have a better win percentage (47.3 per cent) than teams using a four-man defence (36.7 per cent), though much of that has been down to Chelsea's success in the setup. That being said, their strongest weapon has been used against them this season.

Tottenham ended their 13-match winning run by using a three-man defence at White Hart Lane back in January, while Jose Mourinho fought fire with fire with a similar setup at Old Trafford on Sunday, with that the first time Manchester United have been deployed in a three-man backline in England's top tier under the Portuguese manager.

Why Premier League coaches are obsessed with the 'half spaces'

It's far from perfect, but the set-up is evidently having the desired effect for Premier League teams, with managers favouring the system as it allows their side to keep numbers at the back and in midfield, yet provide width in the form of wing-backs.

The deployment of a lone striker has also helped in that regard, as managers know they can flood the midfield to either solidify or increase the number of goalscoring options from deep.

In a similar way to the 4-2-3-1 formation becoming flavour of the month after the 2010 World Cup, a three-man defence looks set to do similar in the Premier League as managers look to evolve and keep with the trend in a quest for glory.

Conte's success with the system looks to be setting the standard and it wouldn't be a great shock to see a three-man defence used even more frequently next season.