Jordan Henderson exclusive: 'It's special to be a part of Liverpool history, but we want more'

Jordan Henderson tells Sky Sports: "I've been very fortunate to be a part of this team, this club and win as many trophies as we have, but we never want to stop." | Watch Southampton vs Liverpool live on Sky Sports Premier League from 7pm on Tuesday; kick-off 7.45pm 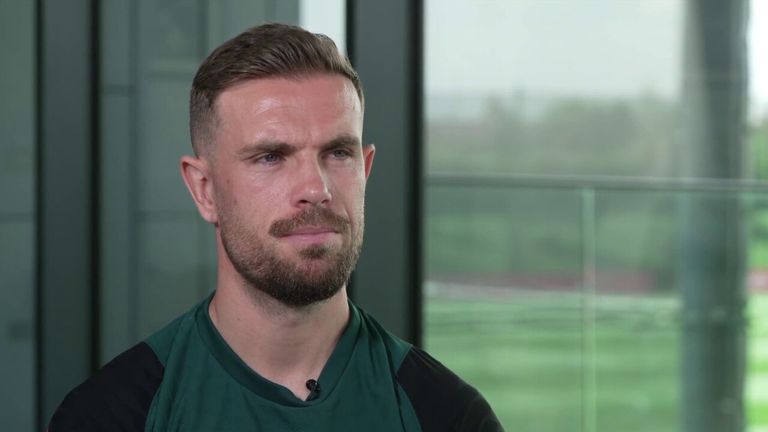 "It's an incredible feeling. To be a part of Liverpool's history means a lot and to captain and lead this team means so much as well, so I never take that for granted."

It was something that may have seemed impossible when the 31-year-old came close to leaving Anfield in the summer of 2012. Henderson admitted 'he cried a little bit' after was told he was free to leave the club by then boss Brendan Rodgers, but after deciding to stay at the club and fight for his place, the rest as they say is history.

You can see the pride bursting out of Henderson when he is told about that stat, especially given the decorated history of Liverpool's past, but after letting his guard down for a split second, the focus was quickly back on the team, showing what the Reds skipper is all about.

He always has and always will be a team man.

Jordan is the perfect team player. He's a leader and the players absolutely respect him.

"I never really think it is about me. It is about the team and what we are achieving," he told Sky Sports.

"I'm very fortunate to be playing in this team and very lucky to be a part of this squad. That's what I tend to focus on more than anything."

The games continue to come fast for Henderson and his Liverpool side as they chase an unprecedented Quadruple.

They added an eighth FA Cup triumph to their Carabao Cup success earlier this year, and now attention turns back to the Premier League when they face Southampton, live on Sky Sports on Tuesday, and the final game of the season on Sunday against Wolves before the small matter of a Champions League final against Real Madrid on May 28.

And for Henderson there's no time to dwell on past successes as he and Liverpool look to add to their ever-expanding trophy cabinet.

"Over the last few years we've been successful and won an awful lot of trophies, but I think you learn that it is about the journey, most importantly, especially when you are winning big trophies.

"It's an incredible moment [winning a trophy] and then after that you realise actually it's about the journey and getting there, doing it all over again and enjoying it.

"Thankfully, I've been very fortunate to be a part of this team, this club and win as many trophies as we have, but we never want to stop. We always want to keep going and to keep moving forward.

"I probably won't appreciate as much as I should until I finish because I'm always thinking about the next thing."

Three games to go: How the title race now stands

Man City have one game left. Liverpool have two. Here are the permutations which will decide who lifts the Premier League trophy.

'Final defeats inspired us to go to the next level'

It's not always been this good in Henderson's time at Liverpool.

There were his early struggles following his £20m move from Sunderland. Then there were the final defeats in the Europa League final and the Carabao Cup final in 2016 before the Champions League final defeat of 2018 in the early Jurgen Klopp years.

And as Liverpool return to action quickly off the back of Wembley success, Henderson insists it was those final defeats that gave Liverpool motivation to go on and achieve the relentless success of recent years.

"When I look back, we've lost our fair share, for sure, especially at the beginning, and I felt as though that gave us extra energy, extra fire to go and get there again and go one step further in all competitions," Henderson said.

"It's about the journey and it's about doing it as much as possible. You never know when it is the last time you are going to win a trophy.

"So, it's about enjoying it and cherishing that moment, but also looking ahead straight away.

"In football things change really quickly and you can't lose focus. You've got to just concentrate on the next thing, the next challenge, and that makes it a little bit easier."

Merson Says: Liverpool have no chance of winning the title now

Paul Merson says Liverpool could win 55-0 at Southampton and it wouldn't make a difference - and why Antonio Rudiger's Chelsea exit is Frank Lampard's fault.

Henderson on consoling Mount after his penalty heartbreak...

Knowing what the pain of losing in a final feels like was one of the main reasons behind Henderson's decision to console Mason Mount moments after the Chelsea star's missed penalty handed Liverpool the FA Cup.

Henderson added: "That is always a big thing for me. You've got to be respectful to the opponent, especially with players you play with from your national team.

"You know how good they are and that they are good people, especially in penalty shootouts, it's never nice for people to miss penalties.

"I knew he'd be feeling really down and to be honest, he probably didn't want me going over there thinking back, but I just wanted to give him a little bit of support because he's a top player, a great lad and he's still very young.

"He's got the world at his feet and I'm sure he'll bounce back, and when he gets the opportunity again, he'll step up and put the ball in the back of the net."

'The Liverpool dressing room is incredible'

"When you look all over the dressing room there are leaders and different characters, but there are different personalities too which is important.

"We respect each other a lot.

"The dressing room is incredible. It basically runs itself now with the culture that we’ve created and because of the fact we’ve got so many leaders in the group.

"I think that is part and parcel of being in a really successful team."

'Fabinho's role is nothing new to me'

Liverpool's busy season has reached its 60th game and it was inevitable injuries were likely to play a part in the run-in due to the sheer workload of Klopp's players.

Virgil van Dijk and Mohamed Salah were the latest players to hand the German an injury headache as both were substituted during Saturday's FA Cup final, adding to the absence of Fabinho, who picked up a hamstring injury during his side's 2-1 win at Aston Villa last week.

The loss of Fabinho would have been of particular concern for Liverpool fans due to the Brazilian's skillset in the all-important holding role, but in his absence, Henderson showed he's an able deputy, switching from his usual role further up the pitch.

"It's a different role altogether, but I've played that role for a number of years now. I've played it a lot this season and also over the past four or five years really. I've played in big games in that role.

It’s not just Saturday. People look at Saturday because it is a cup final and I played there, but if you look at big games this season, I’ve played at No 6.

"Yes, you do have to adapt, but that is because of the position and the role that it is.

"But I feel like I'm experienced in that position and can do a job, if needed, when Fabinho is out or when the gaffer has rotated and tried to keep people fresh.

"So, it was nothing new for me on Saturday. I've played in really big games there and it is a position I'm experienced and can play in, but I can also play as a No 8 when needed as well.

"Obviously, I bring different qualities to the role than Fabinho and it is just trying to do as best I can whatever position I'm in." 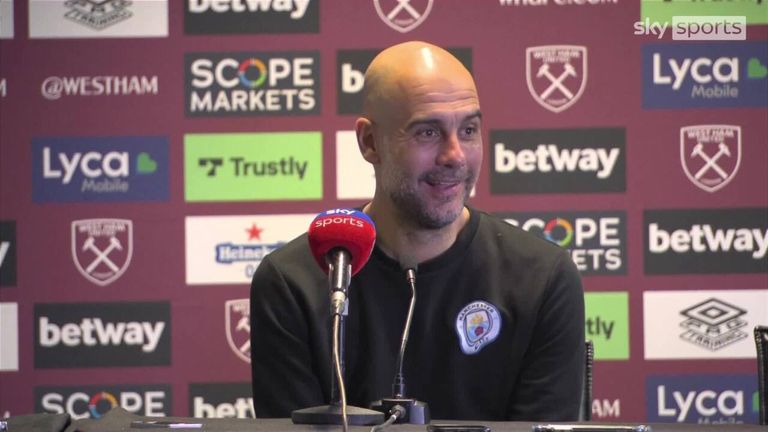 Henderson is once again set to deputise for Fabinho when Liverpool travel to Southampton on Tuesday in a game which is live on Sky Sports.

The Reds have the chance to cut leaders Man City's gap to just one point on the south coast, but Henderson is not expecting an easy ride against Ralph Hasenhuttl's team.

He said: "Whenever we play anyone, no team lays down. They are always fighting in every single game and I'm sure Tuesday at Southampton will be no different. 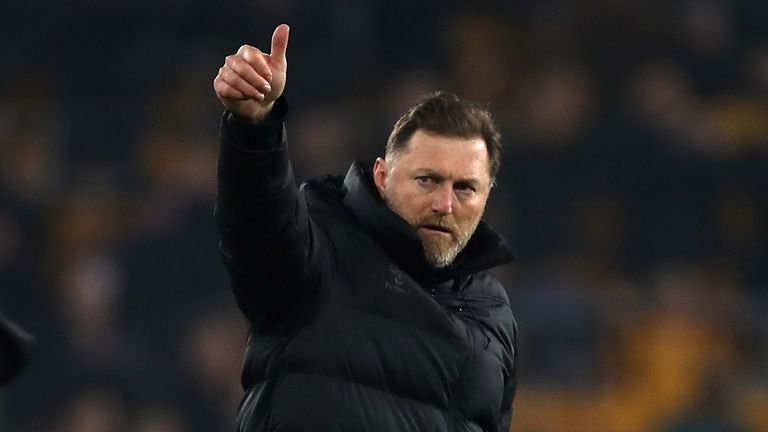 Ralph Hasenhuttl says Southampton's game against Liverpool is their 'Champions League final' and they will give everything to win.

"Southampton are a good side and have good players. They can hurt anyone on their day and I'm sure they will be right up for it, especially with the home crowd behind them. But so will we. It's a big game and hopefully we can go and put in a performance I know we are capable of and get the three points."

Three points would take Liverpool's remarkable season to the penultimate stage and while winning the Premier League is out of the hands, they still have the Champions League final to come.

One of Henderson's trademarks has been showing off his dance moves after a trophy win. It started in Madrid with the Champions League win in 2019 and it continued in the Wembley changing room on Saturday.

When asked if the plan is to see those dance moves again on two more occasions this season, he replied with a smile: "That'd be nice."

Can Liverpool PL take the title race to the final day?

Show up for your team and live stream Sky Sports with a NOW Sports Day Membership for just £5.99 – view the offer here...