By Nick Wright and Peter Smith 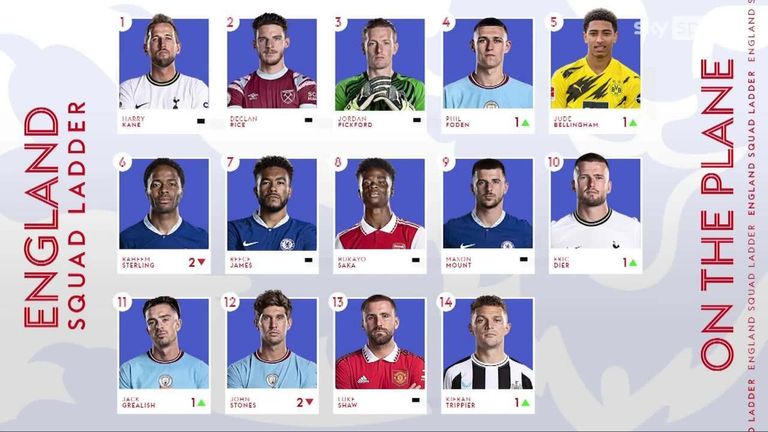 The clock is ticking as Gareth Southgate prepares to name his preliminary squad for Qatar 2022 on October 20 and our ladder, updated weekly and made up of the top 40 players in contention, ranks the latest risers and fallers.

Maguire's continued absence for Manchester United means his place on the plane is in jeopardy and there is plenty of movement elsewhere too, including three new entries.

Join us as we run through the players on the plane, those sitting in the departure lounge with their boarding passes in hand, and those stuck in traffic in a taxi on their way to the airport.

Maguire no longer on the plane

Last week we had Harry Maguire at 14th in our ladder, the centre-back clinging to his place on the plane by virtue of his importance to Gareth Southgate. With no news of a return to fitness, however, he has slipped to 15th, putting him in the departure lounge.

Maguire has not featured for United since picking up an apparent hamstring injury during an error-strewn performance in England's 3-3 draw with Germany at Wembley two weeks ago.

He was not involved at all in United's 2-1 win over Everton on Sunday, with one report claiming he has been allowed to travel to Portugal on holiday in order to "clear his head". Time is running out for him to regain fitness - let alone find some much-needed form.

Kieran Trippier (14th) is the man to have leapfrogged Maguire, moving from departure lounge to plane having impressed again for Newcastle in their 5-1 win over Brentford, grabbing an assist with his superb cross for the opening goal.

There are ups and downs further up the ladder too, with Raheem Sterling (6th) dropping two places having been benched for Chelsea's 3-0 win over Wolves on Saturday.

The 27-year-old has not found the net in the Premier League since August, but it's a different story for Phil Foden, who moves up to fourth having scored yet again for Manchester City in their 4-0 thrashing of Southampton.

Foden's Manchester City team-mate John Stones has dropped a couple of places to 12th, with manager Pep Guardiola revealing he is still not fit enough to take part in training as he struggles with a hamstring problem.

White rises into the departure lounge

The Arsenal man was down in 32nd last week but Kyle Walker's groin injury, which has seen the Manchester City defender drop 13 places, coupled with his own excellent form, has significantly boosted his selection prospects.

It previously seemed that playing at right-back for Arsenal had diminished White's World Cup hopes but Walker's injury, which makes him a major doubt for the tournament, means Southgate suddenly needs a player with the versatility to play there as well as at centre-back.

White, superb in Arsenal's 3-2 win over Liverpool, fits the bill.

The former Brighton man is rated by Southgate having been part of England's Euro 2020 squad. He is comfortable in a back three, and it is also worth noting he was used at right-back in his last two appearances for the national team, against Switzerland and Ivory Coast in March.

White is the biggest climber in this week's ladder but he is not the only upwardly-mobile player in the departure lounge.

Jarrod Bowen (21st) has climbed four places having scored for a second consecutive Premier League game in West Ham's 3-1 win over Fulham, while Marcus Rashford (23rd) has risen five places having put his poor showing in the Manchester derby behind him with a match-winning cameo in the Europa League against Omonoia Nicosia, and another bright performance in United's 2-1 win over Everton on Sunday.

Rashford is a new entry in the departure lounge and so too is Newcastle's Callum Wilson (26th), who impressed again for Newcastle, grabbing an assist and generally looking dangerous in their 5-1 win over Brentford.

Conor Gallagher, meanwhile, continues to look a good bet to earn a place in Southgate's squad having moved up two places to 24th in our ladder after catching the eye again in Chelsea's 3-0 win over Wolves, showing his versatility by starting on the right-hand side of Graham Potter's attack.

The final section of the ladder, made up of players hoping their taxis reach the airport in time, includes three new entries this week, with Ruben Loftus-Cheek (34th) the most intriguing.

The 26-year-old is impressing under new Chelsea boss Potter and his form will not have gone unnoticed by Southgate, who of course had him in his squad for the last World Cup in Russia.

More of the same from Loftus-Cheek between now and the squad announcement is sure to make him a tempting option to Southgate and the England boss will also be monitoring Harvey Barnes (35th), who is finding form with Leicester, and Dominic Calvert-Lewin (40th), who has just returned from injury for Everton.

Those players, together with James Maddison (29th), who scored twice in Leicester's 4-0 win over Nottingham Forest last week, appear to be making late pushes for Southgate's squad but others are slipping out of contention.

Tammy Abraham (27th) and James Ward-Prowse (28th) look vulnerable as other players in their position are in better form, while AC Milan's Fikayo Tomori has also dropped (31st) after an error-strewn performance against his former club Chelsea last week.

Trent Alexander-Arnold's prospects look even bleaker, the Liverpool full-back dropping to 36th after another nightmarish afternoon, this time up against Arsenal's Gabriel Martinelli on Sunday, his poor form compounded by an apparent ankle strain.

It was another bad week for Jadon Sancho (39th), too.

The former Borussia Dortmund winger was hooked at half-time during Manchester United's Europa League meeting with Omonoia Nicosia last week and didn't even make it off the bench against Everton on Sunday.

Check back next week as we update the ladder one more time before Southgate names his squad.

Datawrapper Due to your consent preferences, you’re not able to view this. Open Privacy Options
Win £250,000 with Super 6!