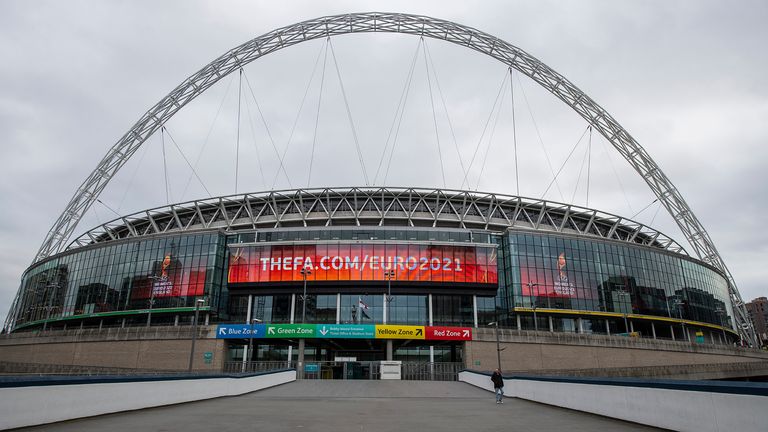 Wembley will continue to host seven games next summer, including the semi-finals and final, but the FA acknowledges that public health must always remain the top priority.

Bullingham has also confirmed the FA are in talks with the government over financial difficulties faced by clubs as a result of mass postponements.

"Everyone's priority is to finish this season," Bullingham told Sky Sports News, in an interview from his home.

"That's one of the main reasons for delaying the Euros, to allow a window that, if the virus gets under control, there will be a window to potentially finish the season. At the moment, we don't know what's going to happen. We're planning every eventuality, so that we can react. The most important thing at the moment is people's health.

"We're covering every eventuality. At the moment we've got a number of contingency plans and we will continue to adapt as and when we get more information.

"Clearly there are different scenarios, if you try and finish the season before the end of June and after it. At this moment in time…there are so many variables, we're building up a contingency for every different eventuality. Some are more complicated than others but the number one priority at the moment is the health of the nation, and football will play its part in that."

Bullingham has asked for the game to "come together" as it supports clubs facing financial hardship following an unprecedented suspension of all fixtures.

"We are aware that there are many clubs impacted throughout the EFL, National League and grassroots," said Bullingham. "We are continuing to speak to the government about that and the whole football family, we should all come together. In terms of specific details, I can't go any further at this point."

When asked if the FA could bail out some clubs, Bullingham replied: "I can't say that, at this moment in time, no."

The Football Association will hold talks with UEFA over rearranging the 2021 Women's European Championships held in England.

"Clearly there will need to be a delay," he said. "We need to work with UEFA to work out whether that will be to later in 2021 or into 2022. It's a very important competition for us and we want to get that right. Not having a FIFA Men's World Cup in summer 2022 means there's a window for it."

"He is feeling, in the same way as everyone else, that there are more important things than football," he added. "We will react to what's in front of us. Football has been incredibly united. Stakeholders have come together, both domestically and internationally, to do what we can in the face of what is clearly a very difficult situation. But the football family has come together."