The race for Champions League qualification continues live on Sky Sports this weekend with Liverpool vs Aston Villa, Crystal Palace vs Chelsea, West Ham vs Leicester City, Tottenham vs Man Utd and Brighton vs Everton.; who will finish in the top four? Paul Merson gives his verdict...

Sky Sports' Paul Merson is back to give his verdict on the fight to finish in the Premier League's top four after an interesting set of results last weekend blew the race wide open.

With Manchester City clear at the Premier League's summit and Manchester United, who are second, with a healthy gap to the chasing pack, the rivals look set for a top-four finish, but who will join them?

Leicester, West Ham, Chelsea, Tottenham, Liverpool and Everton all have hopes of securing Champions League football for next season and with just nine points separating third and eighth, it looks like it will go right down to the wire.

So, who does the Magic Man think will be playing Champions League football next season?

Here he goes through each contender before predicting who will finish in the top four...

Merson says: "Man City was a tough game for them but that is out of the way now. Before the game we all probably thought Chelsea and Tottenham would gain points on them so in the end it wasn't too bad.

"For me, I think Leicester will be alright. They have three tough games to finish, but by then who knows what those teams will be doing in terms of European commitments and league position. It's all about timing and we saw that with Liverpool's win at Arsenal.

"I think if Leicester can win at West Ham this weekend, they look dead certainties to be in the Champions League next season. I say that because of the game they have after this weekend's clash at the London Stadium. They are very winnable games and could have it all sewn up before those tough final three games.

"They have a head start already with the four-point gap which also helps massively." 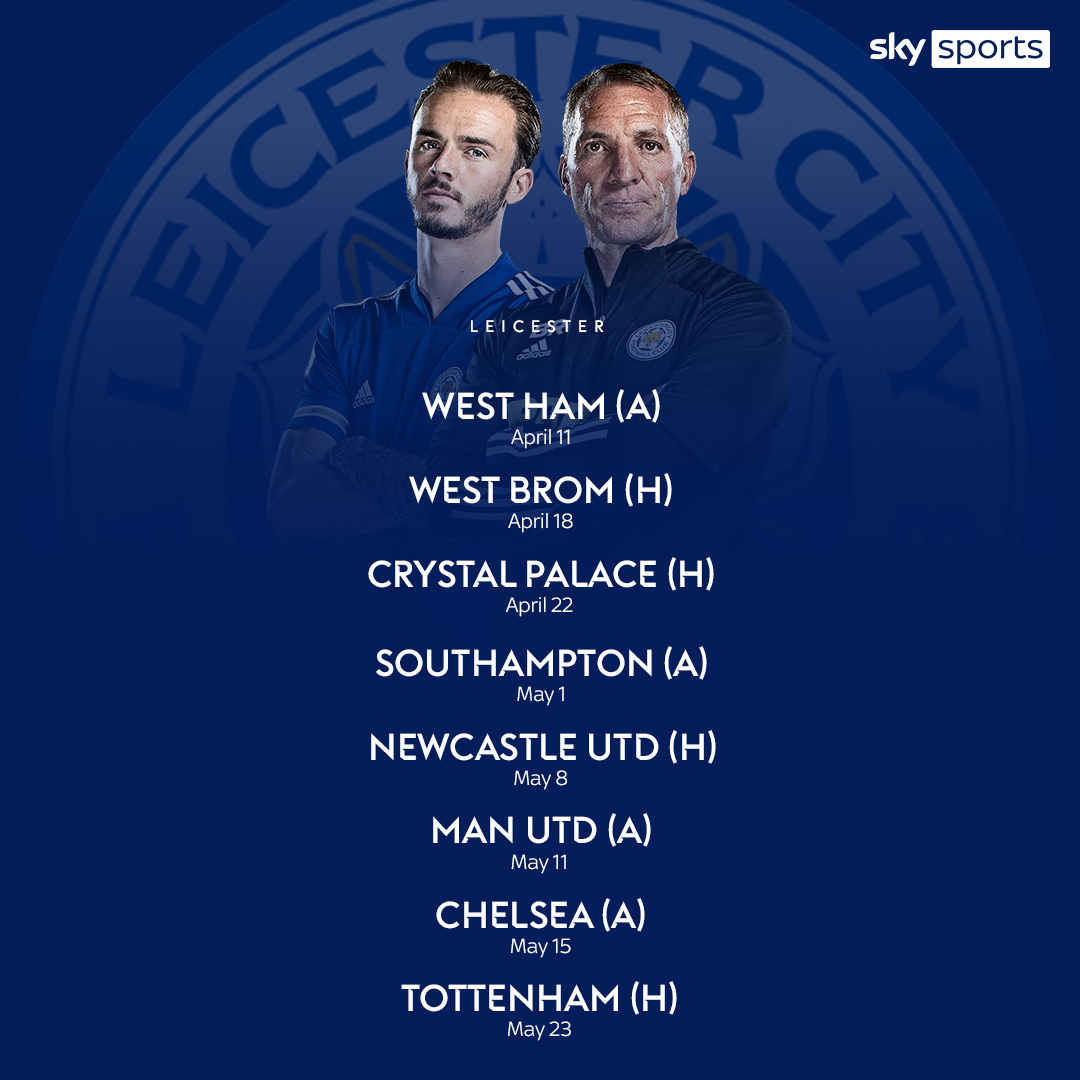 Merson says: "What a huge win for them at Wolves!

"I like West Ham. I like their fixtures for the run-in. They are a really kind set of games. If they were Liverpool, Chelsea or Spurs' fixtures, you'd say they were a shoo-in for the top four, but it's West Ham and there's this nagging doubt. You just don't know how they will stand up to the pressure of the run-in.

"An injury here and an injury there and all of a sudden, they could be in trouble. They already have Declan Rice out and Michail Antonio picked up an injury on Monday, so they won't want to lose too many more players.

"However, I can't get away from their fixtures. They have got the best fixtures out of everybody in my opinion.

"It's a massive game for them against Leicester this weekend. If West ham can win that then you look at Leicester and start to worry. They could then be in a bit of trouble. But if Leicester win you worry for West Ham's chances. That's how quickly things can change.

"This is a once in a lifetime opportunity for the Hammers and I really do think they've got every chance." 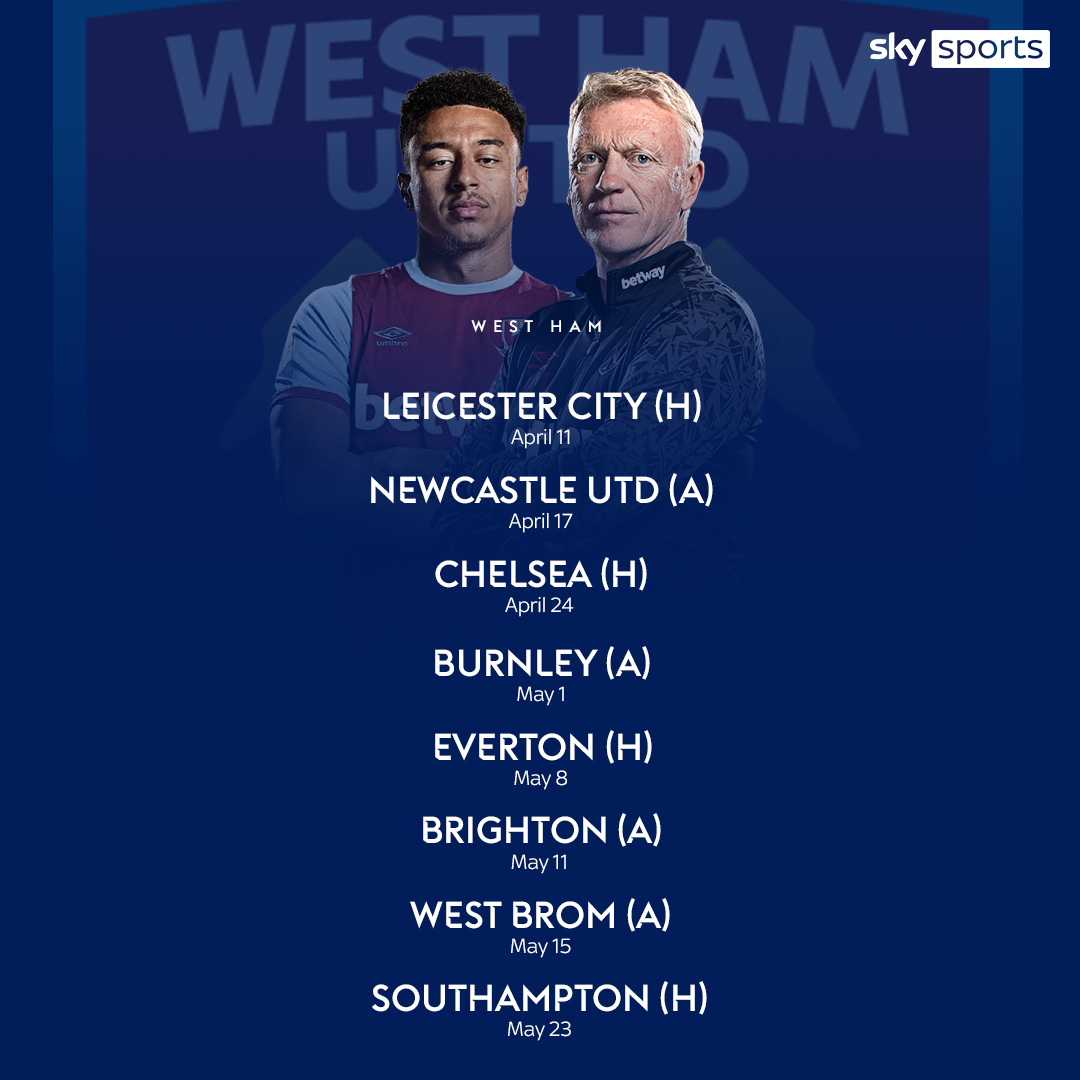 "We were looking at Chelsea marching along, and we all thought they had an easy win coming against West Brom, but all of a sudden, they don't win, and it is all wide open again.

"I found the defeat to West Brom very strange. I didn't like the substitution when Thiago Silva got sent off. He had the players on the pitch to go straight to a four at the back. They would have made chances and I just felt they needed attacking players on the pitch. West Brom were always going to score. They are a dangerous animal with not a lot of pressure on them. Thomas Tuchel played into their hands with the defensive change.

"Forget Silva's sending off, you cannot be conceding five goals against West Brom. I don't care who you are, you can't be doing that.

"In terms of their top four hopes, it's a huge blow. Chelsea have still got go to Manchester City. Brighton at home is a dangerous game, West Ham away is a tough game and there's a London derby against Fulham. They also have Man City away and Arsenal at home and European commitments, where they have a great chance to reach the semi-finals and potentially a final.

"But the bread and butter at the end of the day is the Premier League. The problem is you've got a coach there with an 18-month contract, for now. What do you do if you are him? Do you want to win the Champions League or get into the top four? If I've got a five-year deal, I know what I want but with a short-term deal, I want to win the Champions League.

"Why would you change your team? Why wouldn't you play your best team against West Brom? That tells me he wants to win the Champions League.

"I just can't believe the result against West Brom. They had to win the game. For the race for the top four, it was massive. Now, I struggle to see Chelsea getting in the top four. I think they are really up against it after one bad result." 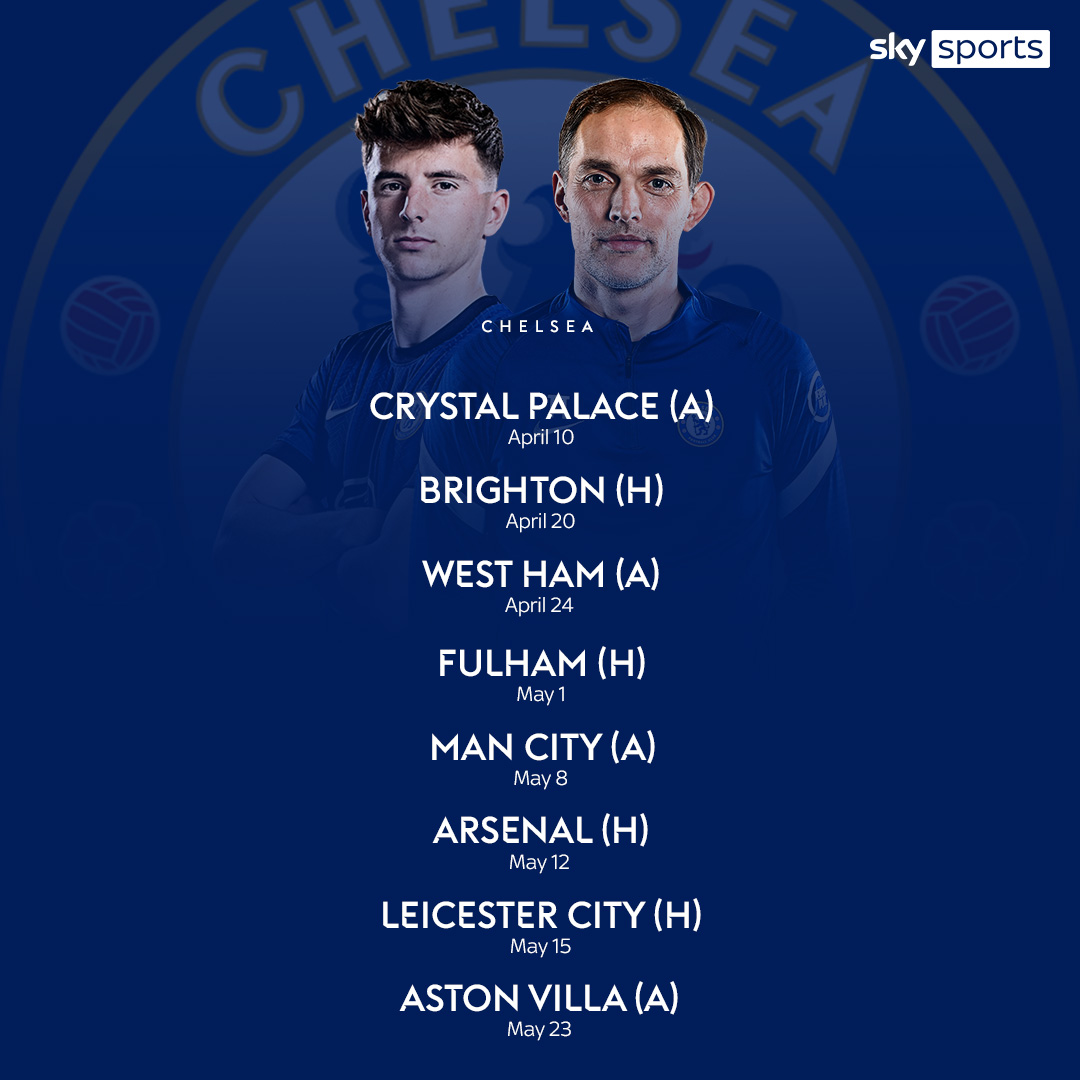 Merson says: "I don't give Tottenham any chance of reaching the top four at all.

"They've got two tough games coming up against Man Utd and Everton and I don't expect them to win either of those games. They then have some tricky games Southampton, Leeds, Aston Villa and Leicester.

"I just can't see how they force their way in. They are seven points behind Leicester at the moment and that's a lot of points at this stage of the season. Too many points really when they've got Man Utd, Everton, Leeds and Leicester to play.

Merson says: "Liverpool's win at Arsenal give them hope.

"You'd expect them to be Aston Villa, especially if Jack Grealish is still missing. But then they have the second leg against Real Madrid. Do they have one eye on that game? This is the problem for sides with European football.

" It's exactly what happened to Chelsea at the weekend. If you take one eye off the ball, you will be punished, and it can badly hamper you with all these teams so bunched up.

"One thing in Liverpool's favour is that they do have some nice fixtures. But will they be fully focussed as they look to turn the Real Madrid tie around? If there was a full house at Anfield, I'd fully expect them to do it, but behind closed doors, it's a tough ask. I'm not sure they can do it and that could help their bid for the top four.

"It was a bad defeat though, and it could have knocked the stuffing out of them. It was really poor in the first half. They were blown away and it will be interesting to see how they bounce back

"I think the last place is between Liverpool and West Ham."

Merson says: "What a bad result for Everton on Monday.

"They missed far too many chances, and, in the end, it was a really poor result.

"They weren't clinical enough and when you are in that position, you have to stick the ball in the back of the net.

"That's now three league games without a win and their chances are slipping away quickly. But that's how quickly things can change.

"They were looking good and they also had some decent fixtures, but at the moment, I just can't see where the next win is coming from.

"I don't give them a chance of sneaking into the top four." 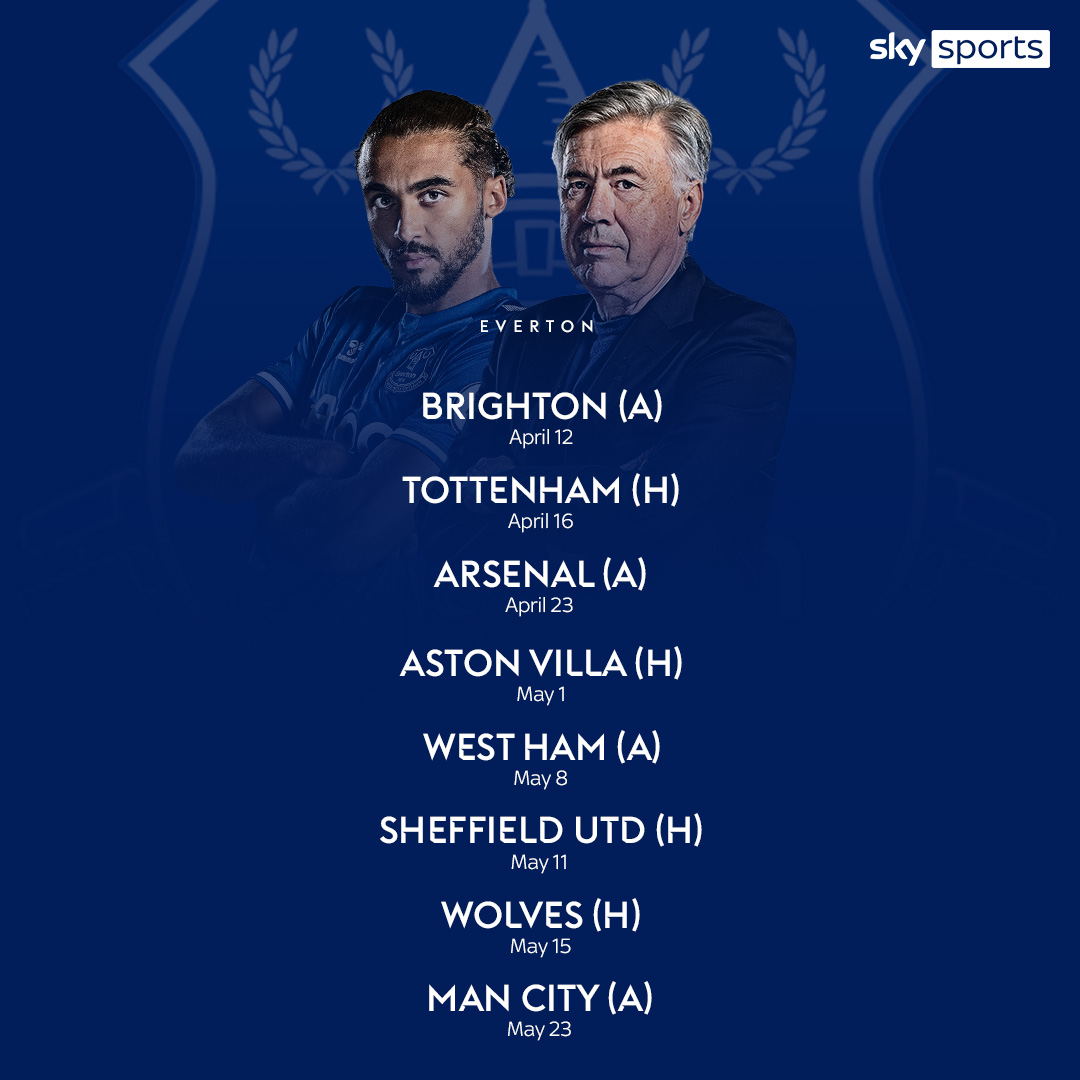 Merson's top-four verdict: It's between West Ham and Liverpool!

Merson says: "This is the Premier League and that's why it's loved around the world.

"On any given day anybody can beat anybody and the results from the weekend prove that. The race for the top four is now wide open.

"Eight or nine games to go, this is where it all starts. I was fortunate enough to win two league titles and the race for the title starts in the last eight or nine games. Poor results can really start to hurt you. Take the West Ham vs Leicester game this weekend, a defeat for West Ham could be critical. You can potentially wave goodbye to their chances with a defeat.

"That's how big the games get at the end of the season.

"West Ham have one of the greatest opportunities in the history of the club to get into the top four and into the Champions League. It's a one-off, the ultimate for this West Ham team. I don't think it's a chance that comes along again!

"Do I think they are going to do it? I'm not sure, but they do have the fixtures to do it. I can't stress how important the game against Leicester at the weekend is for them. I think they have to beat Leicester.

"Obviously, Manchester City and Manchester United are in, and I think Leicester make it. For the final spot, it's between West ham and Liverpool, and I'm just sticking Liverpool, but it's going to be so tight.

"A lot will depend on what happens in some huge games in the coming weeks." 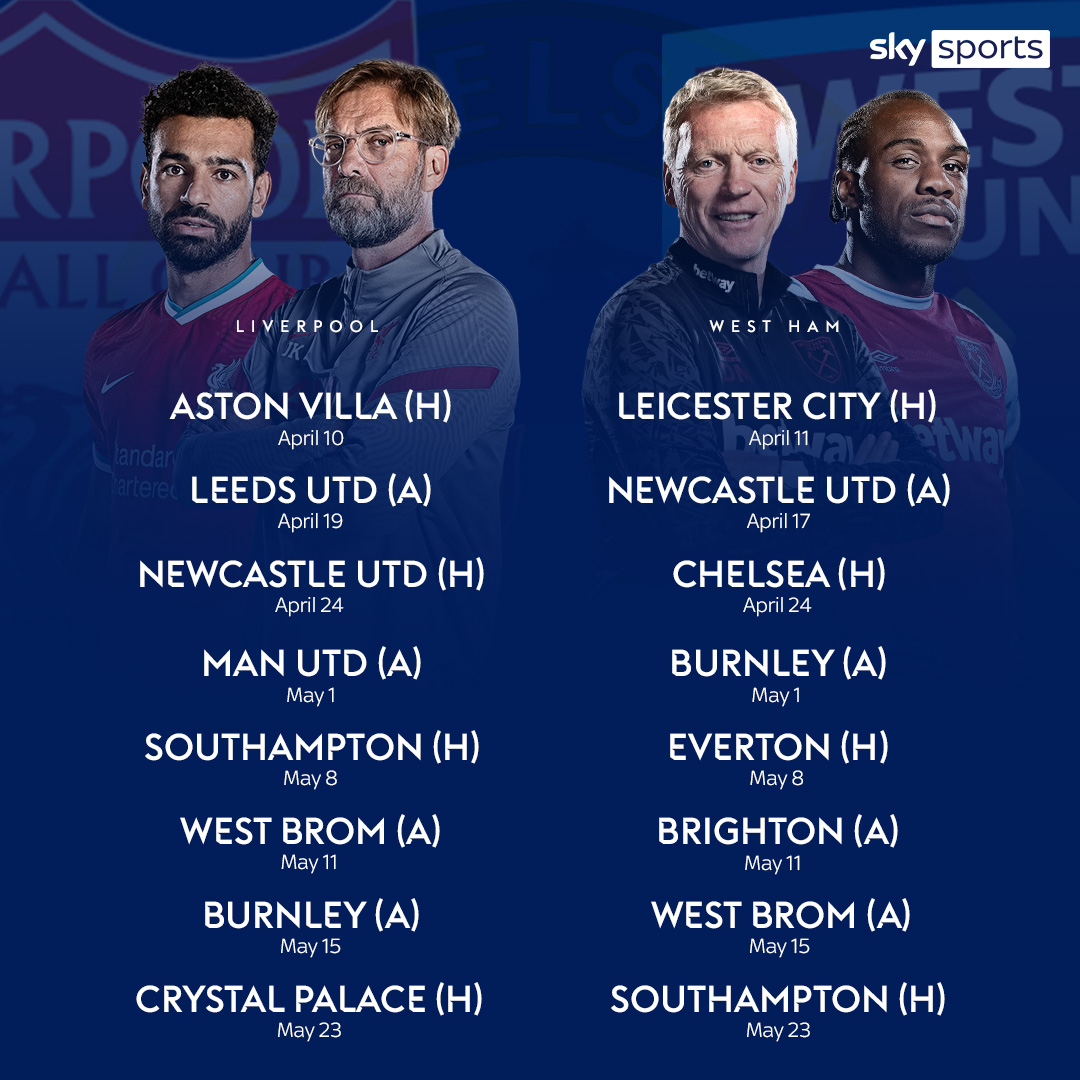 The race for Champions League qualification continues live on Sky Sports this weekend with Liverpool vs Aston Villa, Crystal Palace vs Chelsea, West Ham vs Leicester City, Tottenham vs Man Utd and Brighton vs Everton.