Philippe Coutinho looks set to leave Barcelona this summer – but will not move to Manchester United out of respect for his former club Liverpool, Sky Sports News understands.

United were monitoring Coutinho's availability, with his valuation now understood to be significantly lower than the £142m paid to Liverpool by Barcelona last January, but Sky Sports News understands initial discussions have begun between Paris Saint-Germain and the Brazilian's representatives over a summer transfer.

Coutinho, presently with the Brazilian squad ahead of the Copa America, has admitted his form has been well below par - and sees his future away from the Catalan giants.

The 27-year-old scored 11 goals in 54 appearances last campaign - a third of them coming from the substitutes' bench - and was booed by Barca's supporters for not living up to his big-money move.

Coutinho had no option but to join Barcelona once offered the opportunity but the move was doomed from the outset, according to South American football expert Tim Vickery.

"It hasn't worked and I'm not sure how it can work," he told Sky Sports News. "I'm also convinced that he couldn't say no. How can you say no when Barcelona come knocking? As a Brazilian, you could never say no, but there are clearly two problems. 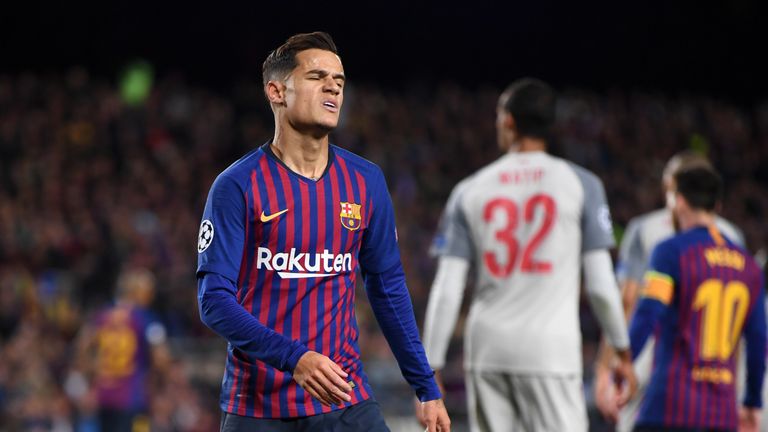 "One is that they signed him as an [Andres] Iniesta replacement, and he's not. Nobody's an Iniesta replacement, but certainly not Coutinho. He's not a genuine midfielder; he does his best work in the final 30 metres of the field. He was signed for a role that he's not fit for.

"The problem is Barcelona spent so much money on him; how much of a loss are they prepared to take to offload him?

"The most logical place for him to come, surely, would be the Premier League. He did very well at Liverpool, and remember that relationship he had with [Mauricio] Pochettino at Espanyol. Is there a little light flashing there?"