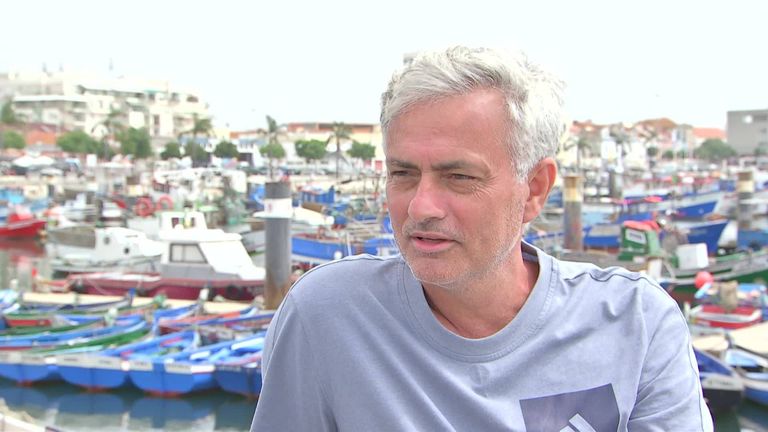 Jose Mourinho talks about his time at Manchester United as says that despite his success there it was not easy.

Jose Mourinho opened up on how his public persona differs to his personal life, and insists his successes at Manchester United were not fully appreciated.

In an exclusive interview with Sky Sports News, Mourinho spoke candidly about his time at Old Trafford, and believes winning the Europa League in 2017 and finishing second to 100-point Manchester City in 2018 constituted real success.

The 56-year-old, who holds a higher Premier League win percentage than Jurgen Klopp, Mauricio Pochettino and Arsene Wenger, is enjoying time out of the game after leaving United in December, and gave a fascinating insight into his character off the pitch.

Asked why his persona differs on and off the pitch, Mourinho said: "It's probably my fault. I am very closed. When I am working I need my loneliness. The football manager on many occasions is a lonely man. Lonely with his thoughts. Lonely with his feelings. Lonely with his decisions. You can have staff and people that work with you but the key word is decision, only one in charge of decision-making.

"So I think TV changed the perspectives.

Mourinho arrived at Old Trafford in 2016 - "the job that everyone wants" - winning the EFL Cup and Europa League in his first campaign.

He says the second-place finish in 2017/18 was an even bigger achievement, but admits he was surprised at the criticism he received and thought the success deserved more credit.

"I can just say that the Manchester United time was not an easy time. I always felt that to win the Europa League was fantastic and it didn't look like it was, the way people approach it.

"To finish second was even more than that [success], so probably I was feeling a little bit like: 'Wow, I'm working well, I'm giving everything and I'm not getting what I think that deserves'.

"The only thing I can promise you is that when I have the next club, the next project, I will be so, so happy that I will walk into that press conference with a big smile. That I can promise."

After winning an unprecedented Champions League with Porto in 2004, a year after UEFA Cup success, Mourinho arrived at Stamford Bridge 15 years ago with credit in the bank.

Fifteen years after his first press conference at Chelsea, Mourinho explained how he came to label himself a "Special One", and though he insists the context of the original label was slightly altered, he had no problem with it sticking.

"When I gave my first press conference I was asked if I was ready for the Premier League. I thought: 'What? I just won the Champions League and you are thinking that I am nobody?'

"So, I went a little bit aggressive by saying I am not one from the bottle, I am 'a' special one. But then, bang, it stayed. No problem."