Chelsea head coach Maurizio Sarri intends to stick with his tactical methods until his players are fully adapted.

The Italian has persevered with a 4-3-3 formation, with creative midfielder Jorginho at its heart, even though Chelsea's performances have stuttered of late.

N'Golo Kante has been deployed on the right side of midfield, in a more attacking role than the one to which he is accustomed, in order to accommodate Jorginho, who followed Sarri from Napoli to Stamford Bridge last July.

Ahead of Saturday's game at Arsenal, Sarri said: "We are not ready to change at the moment. 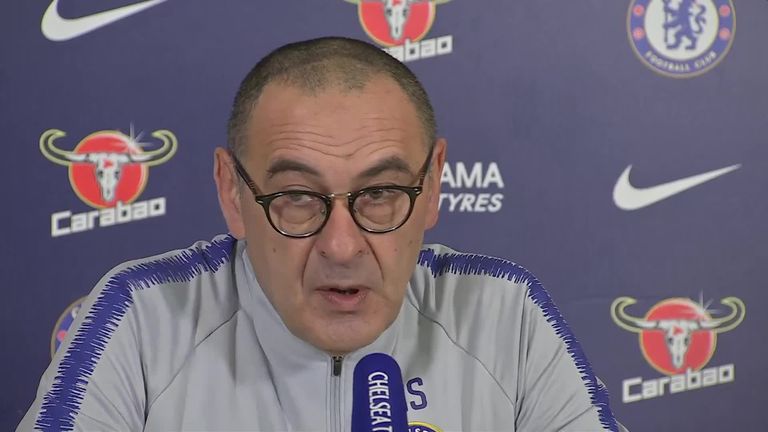 "Like in Naples last season, when we played in the last period also in 4-2-3-1. But not at the moment. We are not ready."

Sarri said Jorginho was "in trouble" in last week's win over Newcastle and would have been replaced had fellow midfielder Cesc Fabregas not left for Monaco.

"Maybe in the last two matches, he was a little bit tired," Sarri said. "He moved the ball a little bit [more] slowly than before, but I think that it's normal.

"You cannot stay at the top for 60 matches, so it's normal to have a different period, a period when you are not so lucid as usual. But it's not a big problem."

Asked if his job depended on his club strengthening in the transfer market, Sarri said: "Not at all, I don't think so. My job is on the pitch.

"I don't want to be involved [in transfers], because I want to spend my energies on something different.

"I want to spend my energy on the pitch, otherwise for me it is a problem.

"In England, we have to play every few days - If I spend 50 per cent of my mental energy on something different, then I am in trouble on the pitch.

"Everyone knows my opinion and I am confident the club is working. I am not able to understand why I have to get involved."

When it was suggested Chelsea needed to improve on recent efforts for him to be completely secure in his post, Sarri said: "(Callum) Hudson-Odoi is improving, (Ethan) Ampadu is improving, David (Luiz) has returned to the top level, (Ross) Barkley has improved.