Jurgen Klopp exclusive: Liverpool are not the finished article 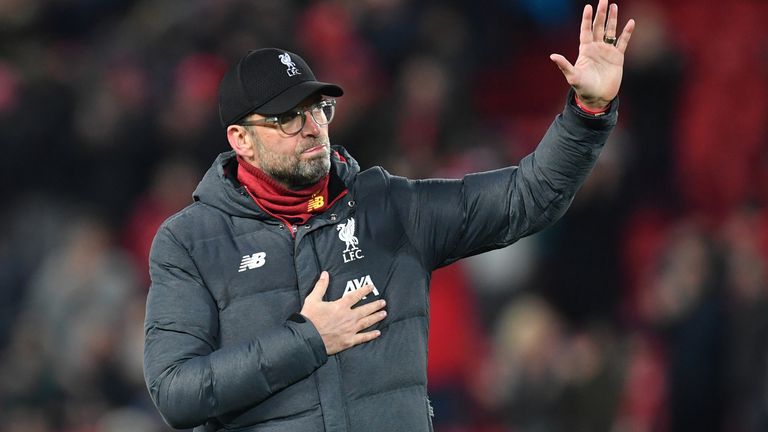 Speaking exclusively to Sky Sports on The Football Show, Liverpool manager Jurgen Klopp insists his side still have plenty of room for improvement

Jurgen Klopp insists his Liverpool side have plenty of room to improve and are not the finished article.

Despite sitting top of the Premier League by 25 points before football was halted due to coronavirus, the German explained to Sky Sports how they will work on improving even more, with fresh talent to come from within the club.

Some of that talent was showcased throughout cup competitions this season, and though Klopp insists the fundamentals of the club won't change, they can get even better. Speaking on The Football Show, Gary Neville says the Premier League manager he’d most like to play under is Liverpool’s Klopp

"We will not change, that's the first thing, but whether we will be successful depends on what other clubs are doing as well because they have all the chance to improve things, do things better. So I have no clue what the future will hold for us.

"But we will not change, this team is not the finished article, and we have a lot of space for improvement, and we work on that.

"We have fresh blood internally coming through. We can improve with this team, which is great."

Reflecting on his time at Liverpool on The Football Show with Jamie Carragher and David Jones, Klopp explained the importance of the faith given to him by the Anfield chiefs early on during his time at the club.

This confidence and positivity was shown even after Klopp's first handful of games in 2015, and throughout final defeats against Sevilla (Europa League 2016), Manchester City (League Cup 2016) and Real Madrid (Champions League 2018).

"It was really clear we needed time. It was clear we cannot fix it overnight. Everyone wanted that, but we couldn't so I had to ask for time. I knew.

"Before that in my career I never got the sack so I had no experience with that, but I knew then it was a different level, and if I can't deliver here quick enough, then I will get the sack.

"We got that time, and the nice thing is that after six, seven, eight games, they were really positive about the situation, they realised we were on the right path. From that moment they didn't question it one second. They were full of faith and trust, and they said the path we will stay on, and everything will be fine.

"That's what we did then. When we lost finals against Sevilla or City or Real Madrid, I think pundits say then if he doesn't' win the next one then they might change, but internally it was never somebody thinking like this."

Reflecting on the coronavirus crisis, with talk of the Bundesliga returning as early as May 9, the former Borussia Dortmund and Mainz manager says training should only be re-introduced when it is safe to do so.

Klopp sees no use in forcing football to return, but does see that it could have a positive impact on the mood of the country.

"We will see, they [Germany] are all very optimistic they will start mid-May. We will see what that means.

"We will see when that starts here," he added. "We know what we want, and the first thing that we want is that everybody is safe and healthy. In the moment it is possible to start training again, we will do that.

"We are all at home, all isolated, we have no cases or stuff like this. If we come together and train in groups of two or five or six or eight, I'm not sure when that will be possible, we have to wait for the government on that. We cannot force that and will not, because we can't, there's absolutely nothing for that.

"But if football can help in some departments with lifting the mood, giving something to think about and to deal with in a different way, then we have to start training at one point, but I don't know when that will be."

Klopp also admits his life hasn't changed too much during the lockdown, saying he would either spend most of his time at home or at Liverpool's Melwood training ground.

"Look, my life didn't change too much to be honest. I can't usually go out, stuff like that. I could go to Melwood once a day for eight, nine, 10 hours it would be the same because at home it is always the same.

"We don't go in restaurants and stuff like this so we didn't change too much. So I don't miss this part of it, but of course I miss the boys, football, and for everybody else to have their normal life.

"It's not important how I feel because I am used to a private lockdown if you like, but I can imagine for other people it is much more difficult and I hope it will change at some point."

"I think there could be something more in reserve for the front three. I think Liverpool have been lucky in that the best players and most important players for Jurgen Klopp have never really suffered injury-wise, certainly big injuries, if you think of the front three, the full-backs and Virgil Van Dijk.

"Can there be more back-up if something happens? Certainly with Andy Robertson at left-back, probably the only recognised left-back at the club.

"So certainly for me, a strong understudy to Andrew Robertson, and certainly someone who is really going to push that front three. I think they certainly need to spend big to keep them ahead of the pack."