Arsenal head coach Unai Emery is confident he can find room for Pierre-Emerick Aubameyang, Alexandre Lacazette and Nicolas Pepe in the same team.

The trio have only spent 35 minutes on the pitch together in the opening three games of the season as Lacazette has battled an ankle problem and Pepe has adjusted to life in England following his summer move from Lille.

But Emery insists all three players can work in unison and hinted he might start them together for the first time against Tottenham at the Emirates Stadium on Sunday, live on Sky Sports.

"I think they can start together and they can play also during the match as all three, it depends how we decide our game-plan," Emery said.

"But I am very optimistic for that situation, but [just] those three players, also (Reiss) Nelson, (Henrikh) Mkhitaryan, (Joe) Willock, (Mesut) Ozil.

"We need to be able to make the best decisions, but above all, to have different possibilities with the players." 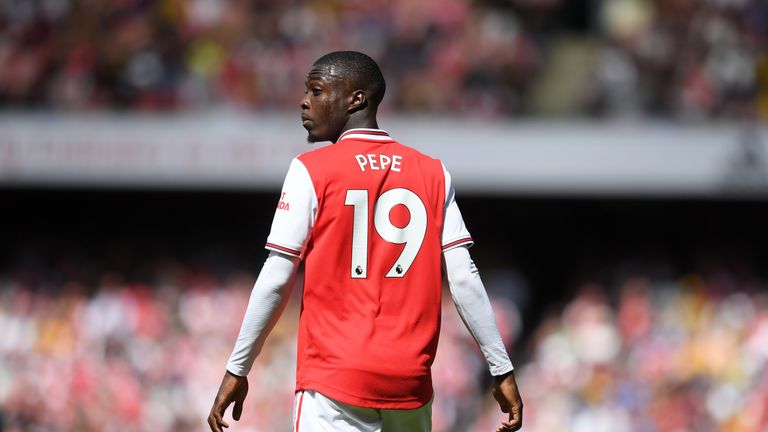 Lacazette has started just once so far as he has battled with the injury he sustained in pre-season, but Emery is positive that he is nearing his best.

The Spaniard understands the excitement of seeing him alongside Pepe and Aubameyang, but has urged caution.

"With Lacazette he had a problem with his ankle. This week is the best week of the last three weeks. He's getting better and feeling better with his ankle, it's very positive," Emery said.

"With Pepe, he came here later than the others but he is getting and feeling better in each match.

"Aubameyang is very important for us, he scores two goals in the first two matches, he had two or three good actions in Liverpool.

"The most important thing for me is to have chances and after with players like Aubameyang, Lacazette, Pepe, Micki, Reiss, (Dani) Ceballos and Mesut we can score with different players."