Shkodran Mustafi: I won't go to 'war' with Arsenal after failed summer move

"I've never been someone who begins a war when something doesn't work out... I am an Arsenal player and still got two years on my contract."

Shkodran Mustafi says he will not begin a "war" with Arsenal over his future, following an unsettled transfer window where the Germany international came close to leaving the Emirates Stadium.

Along with midfielder Mohamed Elneny, the 27-year-old was told by Unai Emery that he was allowed to leave the club during the summer.

But prior to Arsenal's 2-2 draw with Watford, the head coach revealed that Mustafi could still have a future in north London.

The defender enjoyed his first competitive minutes of this season, playing the full match in their 3-0 Europa League win over Eintracht Frankfurt.

"I've never been someone who begins a war when something doesn't work out," he said.

"I always said: If it is possible, I am open to take the next step. If not, I keep playing my football.

"My father, who is my agent, spoke to the club. I am an Arsenal player and have still got two years on my contract.

"The manager said he sees me the same way he sees every player in the team. That's why I played today and that's it.

"We are going to see what the future holds." 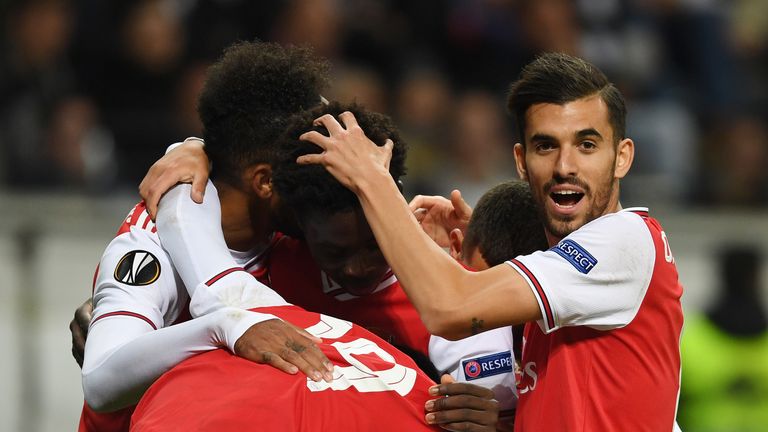 Arsenal manager Unai Emery was pleased with the performances of his young players in their 3-0 Europa League win at Eintracht Frankfurt.

During the transfer window, Emery reinforced the centre-back position with the £8m signing of David Luiz from Chelsea, following the departure of Laurent Koscielny to Bordeaux.

The Brazilian has started four out of five of Arsenal's Premier League games this season alongside Sokratis, with Calum Chambers playing in their 1-0 away win at Newcastle.

Mustafi joined Arsenal from Valencia for £36m in 2016 and has featured 116 times in all competitions for the club.

The defender's current deal at Emirates Stadium runs until the summer of 2021.