Centre-back to leave Lille after three-year stay that included loan spells at Troyes AC and Dinamo Zagreb; Brazilian in London to complete medical 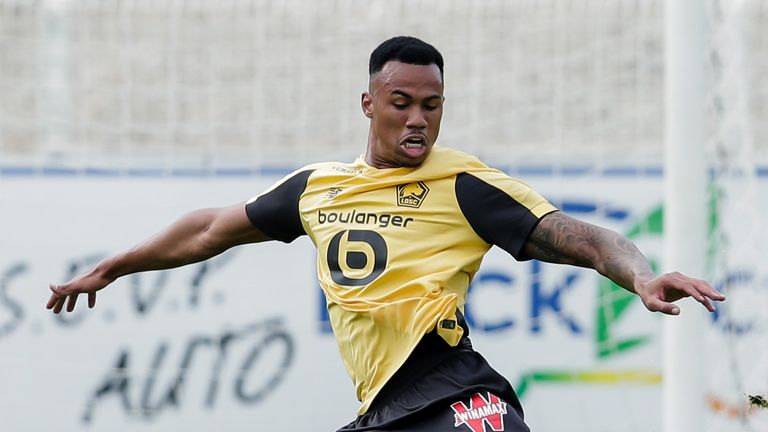 Gabriel Magalhaes is set to join Arsenal after they agreed a £27m fee with Lille for the defender.

Arsenal have beaten off competition from Premier League rivals Manchester United, who held late discussions with the player's representatives, Everton and Italian club Napoli to sign the 22-year-old.

The player watched Lille's opening day 1-1 draw with Rennes from the stands on Saturday and it is understood he is now in London to complete a medical.

Gabriel was a key member of the Lille side that finished fourth in Ligue 1 last season and started each of their games in the Champions League, including twice against Chelsea.

The Brazilian centre-back is set to join a revamped Arsenal defence that will also be boosted by the arrival of William Saliba, 19, who was signed from St Etienne for £27m last summer, but was loaned back to the French club for the 2019/20 season.

In June, David Luiz signed a new one-year contract at Arsenal, while Pablo Mari and Cedric Soares made their loan moves permanent from Flamengo and Southampton respectively.

In addition to the deals for Mari and Soares, Arsenal have also signed Brazilian winger Willian. The 32-year-old signed a three-year deal with Arsenal following the end of his contract with Chelsea.

It is the second time in 12 months Arsenal have signed a player from Lille, following Ivory Coast international Nicolas Pepe's £72m move to the Emirates from the French club last summer.

Who is Gabriel Magalhaes?

Gabriel initially struggled to adapt to senior football at Lille and went out on loan twice. First to Troyes, where he spent the first half of the 2017/18 season, before a temporary move to Dynamo Zagreb in January 2018.

Lille president Gerard Lopez spoke to Sky Sports News about Gabriel's move before it was formally agreed, and said the Brazilian is "at the start of something big" in his career.

"He is a great kid and that is one of the most important things," Lopez said. "He didn't have an easy start with us given the fact that the coach at the time didn't trust him because of his age.

"He is a real fighter and has immense physical presence but knows how to use it smartly. He is still raw and I know the Brazil national team are looking at him very seriously for the A-team.

"I think he is at the start of something big, and he does everything to succeed."

Gabriel, William Saliba could be Arsenal pairing for 'best part of 10 years'

Paris-based Johnson believes the pair could provide the defensive stability the Gunners have needed in recent seasons, with both well-suited to the physical side of the Premier League.

"It would be a pairing of two very good, very promising central defensive talents and potentially a partnership which could serve Arsenal for the best part of the next 10 years," he said.

What else have Arsenal got planned?

Sky Sports News' Dharmesh Sheth gives his insight on some of the other deals Arsenal have planned this summer:

Following the arrivals of Willian, Gabriel, Pablo Mari and Cedric Soares at the Emirates Stadium, it's understood Dani Ceballos signing on loan for Arsenal again next season remains a possibility.