Aaron Ramsdale save: Mikel Arteta in disbelief at 'incredible' stop from Arsenal goalkeeper

Aaron Ramsdale put in a man-of-the-match performance at the King Power Stadium, making eight saves in total, including a world-class stop at the end of the first half from James Maddison's free-kick; 23-year-old signed for £30m from Sheffield United in the summer 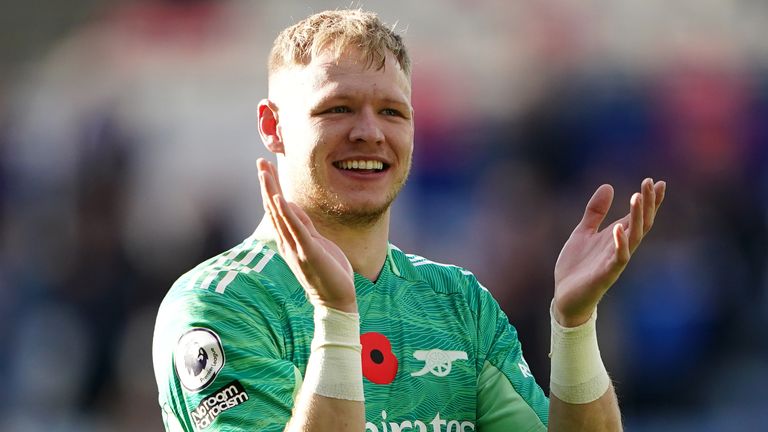 Arsenal manager Mikel Arteta praises the performance of goalkeeper Aaron Ramsdale, in particular the incredible save he made from James Maddison's free kick.

Ramsdale put in a man-of-the-match performance at the King Power Stadium, making eight saves in total, including a world-class stop at the end of the first half from James Maddison's free-kick.

Many had questioned why Arsenal had spent such a fee on 23-year-old Ramsdale in the summer, after two straight relegations from the Premier League with Bournemouth and Sheffield United, but the Englishman is now firmly No 1 at the Gunners, having started the last seven games in the top flight ahead of Bernd Leno.

Arteta admitted he could not believe Ramsdale's save from Maddison, and again explained why the club had invested in him.

"My reaction when I saw the ball leaving Maddison's foot was 'goal'. I don't know how it happened, it was incredible, and the timing of it was crucial.

"We invest money in talent and people we believe can be great for the future of the club. We make that decision based on that. Aaron has had some encouraging performances, today he made some incredible saves.

Of the goalkeepers to have faced more than two shots on target this season, only Édouard Mendy (89.7 per cent) is enjoying a higher save percentage than Arsenal’s Aaron Ramsdale (85.7 per cent), who has saved 24 of the 28 shots on target he has faced.

"He needs to continue to do that. In football you need to play 50 games for 20 years, and this is only the start."

He also told BT Sport: "It's incredible [the save]. When I was watching it I said goal once, goal twice, and he saved them both, those actions are very necessary if you want to have momentum and consistency in results, and we are getting a lot of them."

Ramsdale has conceded only four goals in eight games with Arsenal, keeping five clean sheets, and will surely be competing with Jordan Pickford for the No 1 spot with England in the build-up to next year's World Cup.

Arteta said Ramsdale is dreaming big, but again encouraged his 'keeper not to get carried away.

"I think when you dream big, it's always positive. Keep your feet in the earth.

"He needs to be doing what he's doing every day, trains the way he does, work as hard as he does and look after himself, have the mentality he has, and good performances, and the rest will come."

Ramsdale: One of those days!

Ramsdale's save from Maddison was just one of many on a fantastic afternoon and, speaking after the game, the stopper said it felt like "one of those days".

He told BT Sport: "Super result away from home - they're a top team, Leicester. We played really well, got two good goals and thankfully, it was one of those afternoons where I contributed.

Arteta: We've done nothing yet

Arsenal's season has drastically improved after losing their first three; they are now unbeaten in nine in all competitions, and have won five of their last seven in the Premier League.

But Arteta was typically cautious after the game, saying nothing has been achieved yet.

"We need to carry on, we haven't done anything," he told BT Sport. "We've won a couple of matches, we're not where we want to be still. We ask a lot of things to improve, let's keep humble, keep working hard and go game by game.

"There are a lot of positives, but again there are lot of things to improve."