FREE TO WATCH: Highlights from Arsenal's win at Leicester.

Two early goals and some Aaron Ramsdale heroics helped Arsenal continue their strong form with a 2-0 win at Leicester on Saturday.

It took only five minutes for Arsenal to take the lead as Gabriel glanced home Bukayo Saka's corner, before Emile Smith Rowe capitalised on some poor Leicester defending to steer past Kasper Schmeichel from 12 yards (18).

Ramsdale continued to prove all doubters wrong with a world-class save, tipping James Maddison's free-kick onto the crossbar before the break, before Jonny Evans hit the post with his rebound.

Ramsdale, whose £30m move from Sheffield United raised eyebrows in the summer, continued his heroics in the second half, saving well from subs Ademola Lookman and Harvey Barnes, as Leicester missed several good chances to halve the deficit.

The result means Arsenal move up to fifth and are now unbeaten in nine in all competitions, winning five of their last seven in the Premier League. Leicester lose for the first time in four in the league, and move down to 10th.

Man of the match: Aaron Ramsdale

Both sides came into the game on form - Leicester hadn't lost in five, and Arsenal in eight - but it was the visitors who dominated early on.

The fact Arsenal were unchanged said a lot; they are finally finding consistency in personnel and performance, and they were too good for Leicester from the first minutes.

There was barely a minute on the clock when Saka got in behind at the byline as Daniel Amartey's touch towards his own goal had to be smothered on the line by Kasper Schmeichel, but they couldn't keep Arsenal out for long.

Jamie Vardy attempted to clear Saka's wicked corner, but the ball skimmed off his head and came off the back of Gabriel's, flying into the far corner past Schmeichel.

Leicester were sloppy in possession as Arsenal countered in numbers and at speed, and they soon got their second. After Leicester lost the ball too easily in Arsenal's half, Saka broke on the right, squaring for Lacazette, and although he couldn't get a shot away, Luke Thomas' half clearance fell kindly to Smith Rowe to poke past Schmeichel, his fourth goal in seven.

But the second was a save-of-the-season contender. From Maddison's free-kick on the edge of the box, Ramsdale tipped the ball onto the crossbar, a save made even better by the face he was unsighted by the sun, before Evans steamed in for the rebound. That came off the post, squirmed under Ramsdale and rolled across the line, but Partey was there to clean up.

Leicester changed things up at half-time, reverting to a back four as Amartey and Iheanacho were replaced by Harvey Barnes and Ademola Lookman, and the chances began to come.

Thomas' low snapshot fell just past the far post before Ramsdale did well to spread himself and deny Lookman at an acute angle as Leicester found pockets.

Leicester made one change from the 2-1 win at Brentford as Luke Thomas came in for the injured Ricardo Pereira, meaning Timothy Castagne switched flanks and goes to right-back. Wilfred Ndidi was back among the subs for Leicester after returning from injury.

Despite a sickness bug going around Arsenal, they were able to name the same team as the 3-1 win over Aston Villa, with Ben White starting in defence.

Ramsdale was brave again to deny Barnes at his feet after a heavy touch, while Vardy got too much on his near post header from Youri Tielemans' cross having peeled off Ben White.

Tielemans then found Barnes in a similar position, but he glanced his header just wide, while at the other end Pierre-Emerick Aubameyang's far post effort was saved on the line by Schmeichel's feet.

Arsenal stemmed the tide well in the second half; their defensive work in general was a plus point, with both Aubameyang and Lacazette battling superbly as the first line of protection.

Of the goalkeepers to have faced more than two shots on target this season, only Édouard Mendy (89.7%) is enjoying a higher save percentage than Arsenal’s Aaron Ramsdale (85.7%), who has saved 24 of the 28 shots on target he has faced.

But the biggest positive is Ramsdale, who has conceded only four goals in eight games for Arsenal, keeping five clean sheets. The 23-year-old is now firmly Arsenal's No 1, and will be rivalling Jordan Pickford for the England spot before long on current form.

Leicester boss Brendan Rodgers: "We were so passive, we lacked energy and made it far too easy. We can defend both goals better.

"We had chances in the first half. The keeper has made a great save and recovered well for the second one. 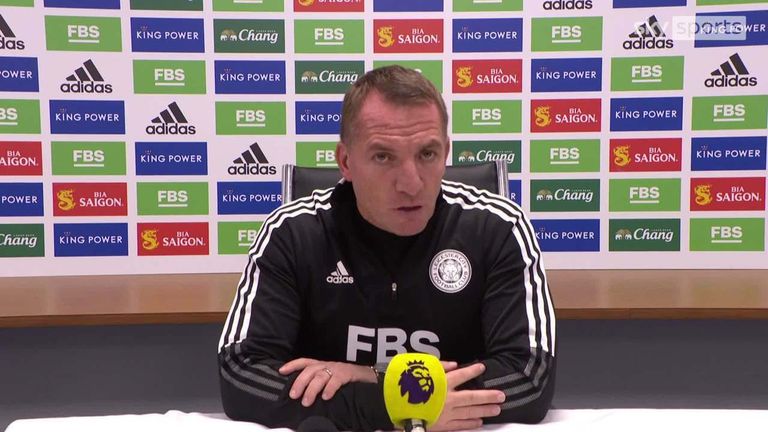 Leicester manager Brendan Rodgers says he was disappointed by their lack of concentration in their 2-0 defeat at home to Arsenal.

"We changed the system that has been working well for us, and in the second half we were much better team. But we rue the start, and that's what costs you.

"The two goals today were soft. They get through the pitch too easy. Apart from that Kasper, didn't have too much to do."

Arsenal boss Mikel Arteta: "We need to carry on, we haven't done anything. We've won a couple of matches, we're not where we want to be still. We ask a lot of things to improve, let's keep humble, keep working hard and go game by game. There are a lot of positives, but again there are lots of things to improve.

"The first part of the season was part of our season. I have to put things in perspective. In that period we missed nine, 10 players in the squad. We tried to overcome that situation, and the boys had an incredible reaction to stick together. That's part of our season, and we should not forget that.

"I see a lot of positive things we have to maintain."

Arteta, Ramsdale on super save

"It's incredible. When I was watching it I said: goal once, goal twice, and he saved them both. Those actions are very necessary if you want to have momentum and consistency in results, and we are getting a lot of them."

"Super result away from home - they're a top team, Leicester. We played really well, got two good goals and thankfully, it was one of those afternoons where I contributed.