Pierre-Emerick Aubameyang's last Arsenal appearance came on December 6, and he was stripped of the captaincy later that month after a disciplinary issue; forward was left out of the Gunners' training camp in Dubai this month; Barcelona not expected to have option to make deal permanent 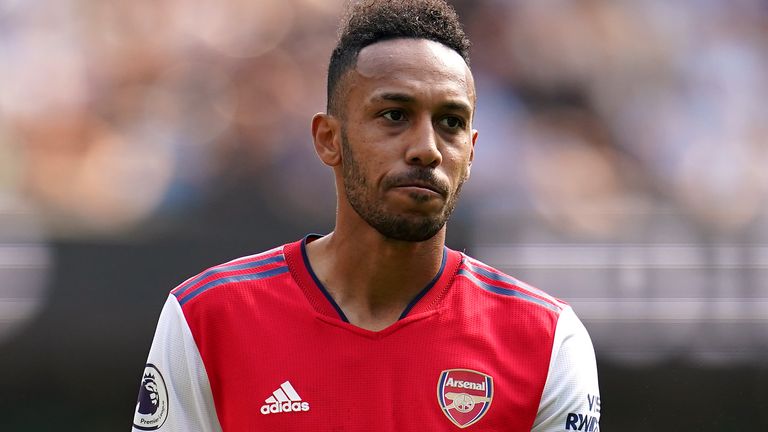 Pierre-Emerick Aubameyang has already arrived in Barcelona, despite ongoing discussions over the financial terms for a loan move from Arsenal.

The two clubs have not finalised terms, but there is increased confidence it can be completed before the transfer window closes on Monday night, and Aubameyang is understood to be making "financial sacrifices" to seal the switch.

Sky Sports News has been told there is an element of surprise in some quarters that Aubameyang has headed to Barcelona before a deal has been agreed.

It is understood Aubameyang has not met with anyone at Barcelona since his arrival, but he is ready to take a medical ahead of a move to the Nou Camp until the end of the season.

Barcelona would not have an option to make Aubameyang's switch permanent, and discussions continue over how much of the forward's wages they would cover.

Juventus also wanted to sign Aubameyang but their move was dependent on Atletico Madrid agreeing to cut Alvaro Morata's loan spell short. As it stands, Morata will stay at Juventus.

Arsenal are willing to allow Aubameyang to leave after stripping him of the captaincy in December following a disciplinary issue.

The 32-year-old has not played for the club since December 6, and was left out of their squad for their warm-weather training camp in Dubai this week.

Sky Sports News reported earlier in the window that the 32-year-old would prefer a move to a top European club if a deal could be agreed.

Analysis: Aubameyang had lost his way

The drop in performance levels has been so great that it is probably worth reminding people that Aubameyang was a world-class striker for much of his time at Arsenal.

There was a notable highlight after that when he scored twice in Arsenal's FA Cup final win over Chelsea in the summer of 2020. But almost as soon as his new contract was signed that September, there has been a sense of decline, of a player whose best days are behind him.

Stripped of the captaincy, too often the leadership has had to come from elsewhere. It is the young players driving Arsenal on under Mikel Arteta, not their best-paid player. That is a situation the club knows well having been through similar with Mesut Ozil. It cannot last.

At 32, there will be hope that Aubameyang could yet recapture his best form, inspired by new surroundings and the challenge of restoring Barcelona to their former glories. At Arsenal, any regret will be tempered by the feeling that it is time for the club to move on.

Has Aubameyang played his final game for Arsenal?

"The deal is not done with Barcelona but there is an increasing confidence it can be done.

"It is a straight loan until the end of the season. Discussions are ongoing about how much of a percentage of his wages Barcelona will pay - we think he is on £350,000 a week.

"Arsenal will be looking for the majority of that payment to be made by Barcelona.

"These developments with Aubameyang explain why, as it stands, Eddie Nketiah remains at Arsenal. That is despite Crystal Palace making two bids during this transfer window."

"If Alexandre Lacazette puts the open goal chance away against Burnley, it is job done and no one is moaning at all. FREE TO WATCH: Highlights from the goalless draw between Arsenal and Burnley in the Premier League

"Everyone would be talking about how good a result that would have been for Arsenal with a clean sheet too. It's 1-0 to the Arsenal and everything is great. But he misses an open goal and all of a sudden, they have only scored one goal in January, which came in their best performance by a mile.

"That's the problem Arsenal have. You are not going to win too much without a centre forward.

"I know people will say Manchester City do, but they still have to win the Champions League playing with a false nine. They also have superstars all over the pitch and are probably the only team in the world that could do that.

"So, Arsenal need a centre forward."