Bolton Wanderers face going into liquidation after the proposed sale of the club collapsed on Saturday morning.

Wanderers have been given until 5pm on Tuesday by the EFL for a takeover to be completed or they could face expulsion from the league.

A statement released by joint-administrator Paul Appleton said: "At 5pm on Friday, August 23, the completion of the sale of the football club and the hotel had been agreed by all parties and undertakings had been issued by all solicitors except those of Ken Anderson.

"Devastatingly, on Saturday morning that deal collapsed. At this stage, there seems little point in apportioning blame because that makes no difference to the staff, players, management, supporters and the community who have once more seen their club taken back to the brink.

"My team have spent the last 48 hours working around the clock, striving to get a deal back on track and trying to convince the parties still in conflict that the very fate of Bolton Wanderers depends on them finding a compromise.

"The EFL have made their position clear by insisting on a 5pm deadline on Tuesday for a deal to be completed or give compelling reasons for an extension. They have also written to everybody concerned in the process to underline that sense of urgency.

"On Sunday evening, there was some tentative dialogue but we are still some way from reaching a solution. Therefore, I am appealing to those parties whose position seems intractable to do everything to reach a compromise.

"The club is currently not in a position to carry on trading and, as such, the process of closing down the company will commence on Wednesday.

"This will ultimately lead to its liquidation, the expulsion of the club from the EFL and the inevitable loss of over 150 jobs. More than that, it will devastate a community for whom the football club is a beacon of hope and expectation.

"I reiterate, unless there is a change of position from any of the parties involved, the process of closing down the club and ultimately placing Bolton Wanderers into liquidation will begin this week."

Wanderers started the season on minus 12 points after being placed in administration before the start of the season.

Bolton owner Ken Anderson told Sky Sports News: "I have had no contact with any of the consortium, The Eddie Davies trust or Keir Gordon (Lawyer for the Trust) since the appointment of the administrators and was not involved in any of the discussions or delays over the last few months.

"The lengthy delays are entirely due to the discussions and negotiations between the consortium, Trust, Michael James, Administrators and Keir Gordon. 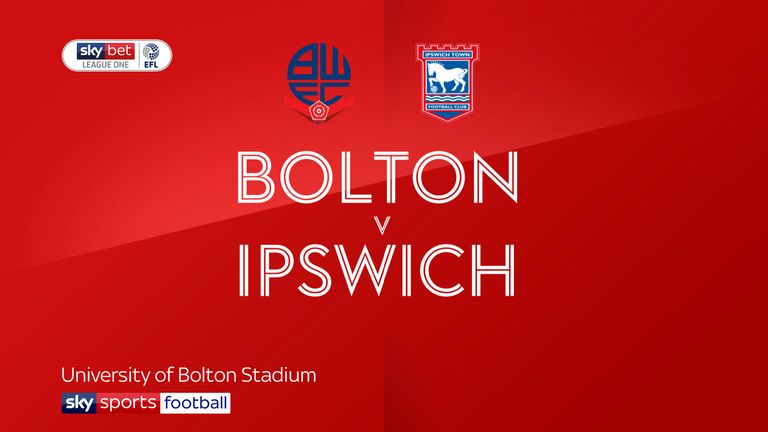 Highlights of the Sky Bet League One match between Bolton and Ipswich.

In a later statement, Appleton added: "I would like to point out that if a successful conclusion to a sale is not found or there are no credible plans for the club to continue the season in administration by the planned Board meeting at 5pm on Tuesday 27 August 2019, then the EFL Board will consider lifting the suspension on the Notice of Withdrawal of the club's membership of the League which was issued when the club entered into administration in May 2019.​

"Further to my previous statement and to clarify absolutely the position, Football Ventures (Whites) Limited (FVWL) are the only bidder to have satisfied the full criteria of the sale process and that remains the position.

"Despite persistent but false rumours in the media and on social media, FVWL are the only party to have met these criteria including, but not limited to, providing proof and source of funding and having satisfied the EFL's Owners and Directors Test throughout the Administration, dating back to May 13."

Bolton also lost large numbers of senior players and fielded the club's youngest-ever side this season against Coventry.

Manager Phil Parkinson and assistant manager Steve Parkin resigned from their positions on Thursday and the team lost Saturday's home League One match to Ipswich 5-0.