Reading manager Jose Gomes has transformed the mood at the club

Reading looked set for relegation but new coach Jose Gomes has turned it all around. Ahead of the game against Leeds, Adam Bate got his thoughts on how he's managed to haul the team out of the drop zone...

When Jose Gomes rocked up at Reading just before Christmas, it's fair to say that hopes were not high. But all that's changed now. Under the Portuguese coach, the Royals have just picked up back-to-back wins for the first time in 15 months and Saturday's come-from-behind victory over Wigan could hardly have been more dramatic.

A goal down with just a minute of normal time remaining, Modou Barrow levelled things up before Yakou Meite popped up with the 97th-minute winner. It was cathartic for the crowd at the Madejski Stadium and Gomes revelled in it, indulging in an overt display of passion that helps to explain why he is already a favourite with the fans. They have missed all that.

Two years ago this club was only a penalty shootout away from the Premier League but that feels a long time ago now. Jaap Stam departed last March after enduring a sharp decline in fortunes and his successor Paul Clement struggled so badly that he didn't even last the year. No team playing in the Championship throughout 2018 won fewer games than Reading.

As for 2019, that did not start much better. A 4-1 home defeat to Swansea on New Year's Day meant that only Ipswich were keeping them off the bottom of the Championship. Five points from safety, relegation appeared inevitable. But with 10 games to go, Reading are now out of the drop zone. So how exactly has Gomes managed to do it?

"First of all, the club has been very supportive with us ever since we came in and they have helped us to make some changes in different areas, on and off the pitch, which we now hope will bring results," he tells Sky Sports. "Of course, the team was in a very difficult position in the league so confidence was always an important aspect to work on too.

"We have tried to get the squad to enjoy working on our system, the tactics and the brand of football that we want to play. I think that they are enjoying things and come into training every day feeling motivated. That is crucial because we still have a very tough battle on our hands and our mentality will be key right until the end of the season."

Not many people knew too much about the 48-year-old before he arrived but that's not to say that he wasn't prepared for the job. Gomes has worked in seven different countries, including Hungary, Greece and Saudi Arabia, and speaks four languages. Indeed, he regards his rich and varied career to date as all part of the path that has led him here.

"I have gained many experiences in different leagues that have really helped me to be ready for this," he explains. "I have managed different dressing rooms, I have worked to limited budgets and I have been in charge of teams in delicate situations in the league table." 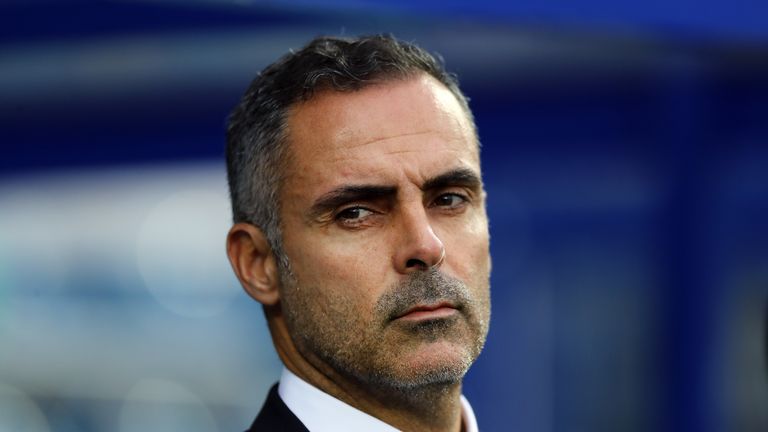 I have always wanted to work in this country and feel the passion that Sir Bobby Robson displayed when I used to go and watch him taking sessions.

England was always the end game though. It has been a fascination ever since the days when he used to watch Sir Bobby Robson's Porto side train during his days as a university student. "I have always wanted to work in this country and feel the passion that Sir Bobby Robson displayed when I used to go and watch him taking those sessions," he says.

Gomes later became a fitness coach and eventually assistant manager at Porto himself. His philosophy was shaped by his mentor there Jesualdo Ferreira under whom he also worked as an assistant at both Malaga and Panathinaikos. Wolves boss Nuno Espirito Santo was part of Ferreira's coaching staff too so the precedent is there for Championship success.

He has reacquainted Reading with possession football. "Right from when you play as a kid with your friends until you compete professionally, the one thing that you always want to do is score goals," he explains. "And to score goals you have to have the ball and focus on link-up play and controlling possession. That is my idea."

It would be no exaggeration to say that Gomes has transformed Reading's approach. Prior to Christmas, they ranked 17th for possession but since then they are among the top four. Only Swansea and Tuesday's opponents Leeds have played more passes in that time. In the FA Cup, they even went to Manchester United and had 60 per cent of the ball at Old Trafford.

"I like my teams to control games, dominate possession and force the opponent to move out of position to regain possession," says Gomes. "This then creates space for us to exploit with our quick players.

"Of course, there are many different situations that you have to adapt to and you have to dominate the physical side of the game to earn the right to have the ball. But our players have the technical ability to play and follow our ideas and that's what we're trying to do."

It is working so far. A home game against Leeds will be another tough examination of the team's progress, but they can at least go into the challenge with confidence. It's been an unlikely turnaround but for the first time in a long time there is some optimism at Reading. That's a testament to the efforts of Jose Gomes and his players.