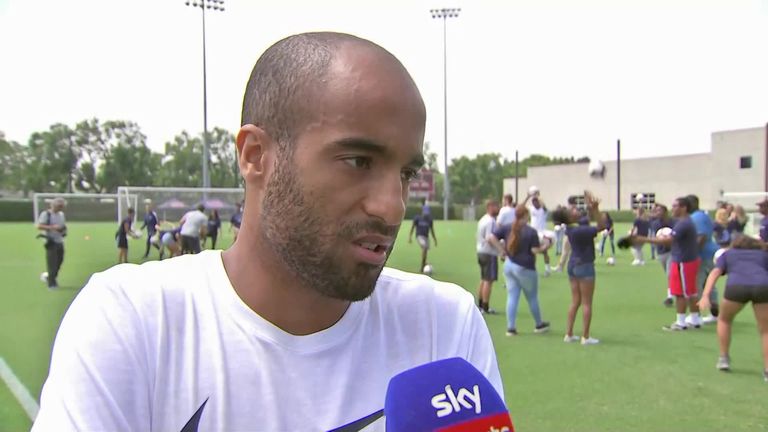 Lucas Moura says he is feeling settled at Spurs

Lucas Moura says he has fully settled into life as a Tottenham player and is raring to go for the new season.

The Brazil international midfielder signed from Paris Saint-Germain for £25m in January and went on to play 11 times for the club last season, having made his Spurs debut as a late substitute in the 2-2 draw away to Juventus in the Champions League.

Moura is now keen to play his part in the club's push for silverware in 2018/19 after admitting it took him time to fully adapt to life in the Premier League.

"The first six months was for the adaptation, to know the club and my team-mates and to adapt to a new championship," the 25-year-old told Sky Sports News.

"I hope this season I will be 100 per cent ready to help the team.

"I feel comfortable now but I am a little bit reserved, a little bit shy, but all my team-mates are very nice and I am so happy, everyone helps me.

"It is a pleasure to be here and I am so proud of this."

Tottenham defender Ben Davies is also on the club's pre-season tour of the USA, where they are involved in the International Champions Cup, with their next fixture in the tournament coming against Barcelona on Sunday.

Barcelona will get their pre-season matches underway this weekend when they take on Tottenham in the ICC, and there could be a debut for Malcom.

After finishing second and third in the Premier League over the last two seasons, Davies is keen for them to hit the ground running in the new season if they are to have a chance of picking up some silverware.

"We have been there or thereabouts the last couple of years and have narrowly missed out on a couple of occasions," said Davies.

"We have to be ready from the first to drop as few points as possible early doors to stand us in good stead for the season."

Moura and Davies were speaking at an event in association with First Star, a national non-profit organisation that partners with universities and child welfare agencies to improve the lives of fostered youth through innovative college-preparatory programs, ensuring that foster youth have the academic, life skills and adult supports needed to successfully transition to higher education and adulthood.