After reaching the Champions League final in May, Tottenham have stuttered at the start of this season. But as he told Sky Sports' Laura Woods, Mauricio Pochettino is remaining calm under increasing pressure.

In all competitions so far, Tottenham have won just four games - three of those in the Premier League - and have matched that in defeats, including a 7-2 demolition by Bayern Munich in the Champions League.

Spurs are already five points off the top four, currently in seventh with 12 points, with concerns over stilted showings and under-performing players.

But among the noise is Tottenham manager Pochettino, who is keeping a cool head and faith in his team ahead of their trip to Premier League leaders Liverpool on Renault Super Sunday.

He told Woods: "I am more relaxed and more calm than I was five years ago. I am a coach and a person that doesn't really feel the pressure or the stress. I love to have different experiences in my life and of course, if you win, it is easier but when you don't win, you need to stay calm and show the balance too. Tottenham's Erik Lamela hopes the side can carry their newfound confidence into Sunday's match against Liverpool, after a tough period for the club

"This is a situation we use to learn and improve, and to enjoy too, because it is football and the drama of football is not the drama of life, that is why we feel very responsible. We care a lot about our job, the football club and our fans but most importantly, it is a game.

"I feel great because you always need to be optimistic when you face problems. You have to be positive, it is the only way that you can change things. 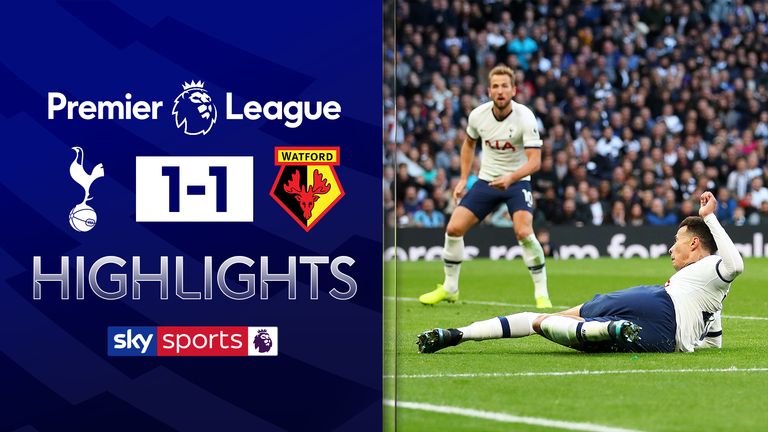 FREE TO WATCH: Highlights from Tottenham's draw against Watford

"If you are not optimistic and you are negative, it is better to put the white flag up but I am not a person like this. I am a person who loves to face the problems and try to find a way to fix that.

"We are a group of people who love to face the problems and to behave the same and natural, that is the most important thing. We are all here to try to compete and to try to win but even when you don't, you have to be positive and be strong with your ideas and your principles."

Sunday's game against Liverpool will be Pochettino's 200th Premier League match in charge of Tottenham, five-and-a-half years after he joined from Southampton.

The Argentine reflected on the "intense" spell he has spent in north London, saying: "I look back and if I need to measure it on time, it is like I've been at Tottenham for 20 years because the five-and-a-half years here have been so intense.

"It is so difficult in the current football business to survive. I feel proud, I am happy in some points and in other points I feel the responsibility because people always expect the best and to deliver good results. In different circumstances, we are not delivering the results they expect but we are responsible and we are working so hard to fix that.

"I've always said that you need to know who you are, where you are and why Tottenham offer a contract to you. For us, it was to close the gap on the top four, provide stability to the club, be consistent and to fight for the top four until the new stadium. Now we have achieved all this, playing four seasons in a row in the Champions League and finishing our new stadium.

"But of course, when you play in the Champions League final, it is the most important thing you can play and always after, it is difficult to keep the level. At some points, the expectation is massive but it is not easy because all the clubs are working to try and achieve the same as us.

"I remember in my first season here, the people were so focused on us - the coaching staff and myself. The problem is that the memory is very short, but we suffer a lot and I remember every single season and every single week that I spend on the training ground.

"The focus was always there, the pressure was there, the thrill was there and that is no different from five years ago when we were playing in the Europa League and it was a dream to be in the top four and play in the Champions League when we were so far away from the opportunity to fight for the top four. Tottenham's Dele Alli says it's easy for people to criticise Mauricio Pochettino when the team's form dips, but believes the players need to look at themselves

"Now, we are in a better position than five years ago but always the ideas and expectations increase and we wanted to be better every single season."

But what is next in Pochettino's grand plan for Tottenham? "I think that is the key and our vision when we arrived here was to make a plan to arrive into the new stadium and to play in the Champions League. For me, I wanted us to finish after five years with the plan we created back then. Then you need to create another strategy and it is so important to have a clear objective.

"Now, our objective is to improve our performance in the way that we want because we have the quality. A few months ago, we were playing in the final of the Champions League and it wasn't a coincidence.

"But for different circumstances, we are not at our best and by working hard, we will begin to perform again in the way that we want. It is going to take time, but we have the capacity and the quality to perform as we want." The task does not get any easier on Sunday, as they take on Liverpool - who beat them in the Champions League final five months ago - live on Sky Sports.

But ever the optimist, Pochettino is relishing a trip to Anfield and will be cherishing every moment of the encounter.

"I don't believe it's a big test," he said. "Of course, it is going to be difficult. Liverpool are having a fantastic season, last season they were very close in the Premier League with Man City, they won the Champions League final against us and I think they're doing a fantastic job. "Jurgen Klopp is a fantastic guy, I admire him and we have a great relationship. It is great to meet him and play against a team like Liverpool that have unbelievable players.

Liverpool vs Tottenham is live on Super Sunday from 4pm; kick-off 4.30pm. Sky Sports customers can watch in-game clips in the live match blog on the Sky Sports website and app. Highlights will also be published on the Sky Sports digital platforms and the Sky Sports Football YouTube channel shortly after the final whistle.