Scott Parker says Premier League proposed rearranging the London derby against Tottenham on Saturday, something he felt was not "realistic"; Jose Mourinho doesn't believe Fulham are hard off playing the game at short notice

Spurs were originally due to host Fulham on December 30 before the game was postponed hours before kick-off due to a coronavirus outbreak within Parker's squad - something which had frustrated Jose Mourinho.

With Tottenham's Premier League trip to Aston Villa, scheduled for Wednesday, postponed due to an outbreak in the Villa camp, the Premier League rescheduled the London derby for the same night.

Speaking in his pre-match press conference, Parker said: "I am angry because it is not right. It is wrong. That is why I am so angry.

He added: "The possibility of playing Spurs on Wednesday came on Saturday.

"We didn't think that was realistic and we were informed Monday morning at 9:30. To confirm that on Monday morning is scandalous. I accept we have to play the game, but it's the notice." 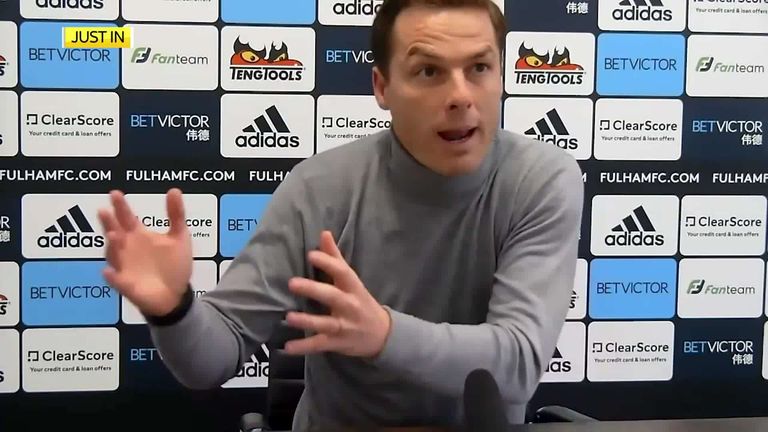 Asked if it was acceptable Fulham had to prepare at short notice for the Wednesday's game, Mourinho replied: "Are you serious? They had 48 hours to prepare for this game.

"Look, I had the news I was not going to play them two hours before the game started." However, Parker disputes Mourinho's comments because he believes it is very different to prepare for a game that doesn't happen than one that does, while he also pointed out that Spurs were already planning for a game midweek.

Fulham's match against Chelsea, originally scheduled for Friday, was pushed back to Saturday as a result of the fixture reshuffle.

"Regarding being told the game is called off 48 hours before or 2 hours before is really an irrelevance," Parker said.

"It's a disappointment you have had a game called off - I understand that. But to have a game called on with 48 hours notice is… I don't want to get into that regarding Jose but I think he will know all too well that obviously you plan for one game or the other.

"Tottenham knew they had this fixture in. Jose's team selection at the weekend suggested that. He planned for the next however many games they have got, and they have got a lot granted."

Mourinho, whose side have three games to rearrange in an already busy schedule, argues the league took a "positive solution" in rearranging the game against Fulham for Wednesday amid the ongoing impact of the coronavirus pandemic.

He added: "The biggest impact is to have matches postponed. The changing of the order, the impact is I would say minimal, because in the end you have to play 19 matches at home, 19 away. You have to play two matches against every team."

Fulham played their first game since December 26 as they overcame QPR in the FA Cup on Saturday following the Covid-19 outbreak at the club, and Parker is concerned about the decisions regarding player welfare.

"Do I see that this would happen if this was a top of the table clash with two of the biggest teams and managers then probably not and rightly so," he said.

"For me this is not acceptable. It is [about] the integrity of the game, the welfare of the players. We are now putting players into a position here after two days training."

It could not be simpler: we will have free-to-watch match highlights of every Premier League game on the Sky Sports website, app, and the Sky Sports YouTube channel shortly after full-time of every fixture.

In addition, Sky subscribers will also be able to enjoy in-game clips from Sky Sports matches in our Digital match blogs.

Premier League games to be rearranged