The Newcastle fans were definitely happier when Rafa Benitez was in charge, but I think some of them have started to come round to Steve Bruce, writes Sky Sports News' north east reporter Keith Downie.

During the 4-1 win over Rochdale in the FA Cup third-round replay on Tuesday, it was the first time that supporters outwardly showed an appreciation and acceptance of their manager. They weren't serenading him but they chanted for Bruce to "give them a wave".

From the images of him embracing Joelinton after his first goal at St James' Park, and first anywhere in 20 games, the supporters could see the appreciation of a striker towards his manager having stuck by him.

Ultimately, Bruce can't help who came before him, and Benitez has now been gone for seven months. This is his dream job and he was never going to turn it down a second time.

Despite there still not appearing to be a clear plan at present, he and his players have over-achieved so far. When they've suffered bad defeats this season, they have followed it up with a good response.

Newcastle have never let their heads go and they've just kept battling away - that's something the manager has instilled.

When they were doing well in late autumn, they had a couple of wins against Southampton and Crystal Palace and they won at Sheffield United, and those against the appointment disappeared.

When they went on a run over Christmas when they lost three games in a week, it didn't take long for the dissenters to come back to the surface.

What Rafa always did was have a strong end to a season, and given the amount of injuries Bruce is having to juggle, it's going to be difficult for him to do the same.

In the 5-0 defeat at Leicester earlier in the season, Bruce went with four at the back in an attempt to develop the system he wants but he got his fingers burned. He's reverted back to the formation the players are familiar with from their time under Rafa with three centre-backs.

But it's not been free-flowing football under Bruce. It wasn't like that under Rafa, either.

He has tinkered with that old system of late with Miguel Almiron playing behind two strikers as opposed to when Rafa had just Salomon Rondon up top with two either side. I feel Newcastle have had their fair share of luck this season.

Their possession stats are very low and yet they still are managing to sneak wins. You can either put that down to luck or you could deduce that he's got his squad playing for him and they keep going until the end - I feel it's a bit of both.

I don't think Rafa necessarily had the same relationship with the players as Bruce, who is more of a man-manager.

The players had ultimate respect for Rafa because of his standing in the game. Players would tell me how he would continually drill tactics into them even when passing in the corridor at the training ground.

They're two completely different managers, but ultimately the football under Rafa was still quite negative. However, supporters were willing to accept this because they felt he understood them and loved the city. 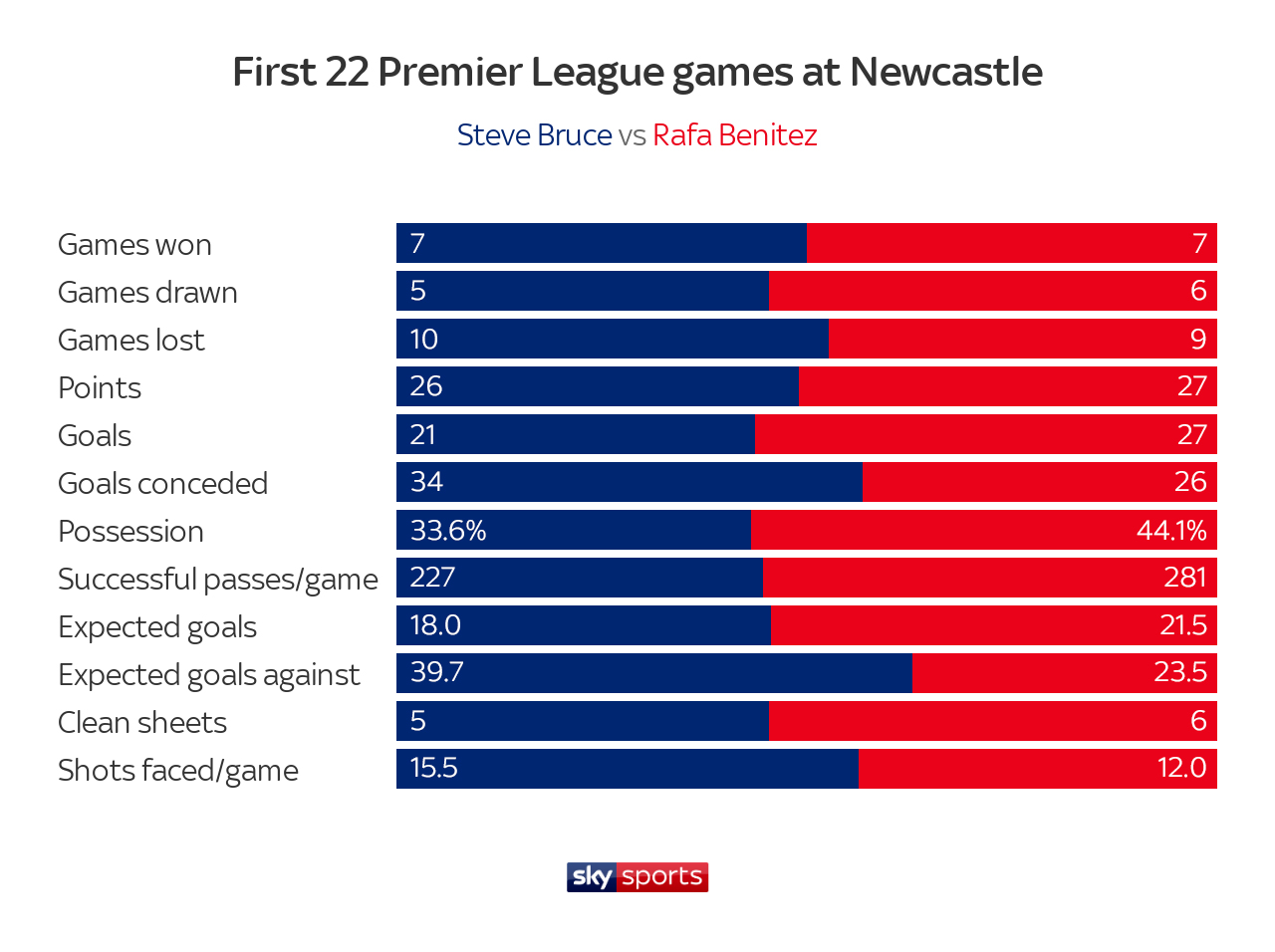 Under Bruce, you're not quite sure what you're going to get in terms of results and performances. Benitez kept it a lot tighter always with one eye on the goal difference, whereas you always feel under Bruce, it's a lot more unpredictable.

Rafa showed he was capable of improving players, but I don't think Bruce has yet made individual improvements. It just feels the players are going the extra mile for him. The question supporters are asking is whether Bruce is truly building something. With Rafa, it felt like they were.

They finished last season strongly and it felt there was a project in place when he left. Perhaps because he came in late and had little time to prepare, it still doesn't quite feel like that under Bruce.

Bruce is trying to get through a season, but at least he is really trying to do something with the FA Cup.

From the minute he arrived, Bruce has said that he wants to do something in the cup competitions. He has said his best day as a manager was when he took Hull to the FA Cup final, and he wants to do that with Newcastle.

Against Rochdale he made changes again, but he played the strongest team available to him due to the injuries. He knows that he will get credit from the supporters if he goes on a cup run or gets to Wembley, but he genuinely feels that with a bit of luck in the draw, Newcastle have a chance of ending their trophy drought.

Newcastle have failed to reach the fifth round of the FA Cup since 2006. With Oxford at home next, Bruce will see it as a window of opportunity. If they win that, they're two games away from Wembley and this gives supporters the chance to dream.

Conversely, Rafa didn't take the cups seriously. He would say all the right things, but he would make nine changes and the players coming in were significantly weakening the side. It wasn't that he wanted to go out, but he wasn't willing to risk his best players in another game.

His priority is trying to sign a striker and he's pretty much made that clear since the start of the window.

It's a difficult window to do business and to try to sign a proven striker is virtually impossible - he and Ashley are going to have their work cut out to try and do it, provided the owner decides to release some funds.

Newcastle's transfer business this month is still in its infancy with time running out. However, it's significant that Ashley attended his first match of the season this week and has now held a transfer summit with his manager.

He had a similar meeting with Rafa over a year ago which resulted in the club breaking their transfer record after 13 years to sign Almiron. Since then, he's only been to Newcastle twice, the other time being on the day Joelinton arrived. It will be interesting to see what comes out of those talks come the end of the window.

Bruce said at his press conference earlier this week that Ashley has been very supportive so far and that might work in his favour over the next fortnight.

They have made an enquiry to RB Leipzig for winger Ademola Lookman and they also want a box-to-box midfielder. The summer signings had been arranged before Bruce arrived at the club, so this is really his first window to get his players in.

The feeling among fans is that Ashley will look at the club's position in the league and say they are fairly safe, meaning he doesn't have to splash out this month. That's how on the whole he has operated during previous January transfer windows.

Bruce has a significantly better relationship with Ashley than Benitez did, so if anyone was to twist the owner's arm this January, he is in a much better position to do so than Rafa ever was.