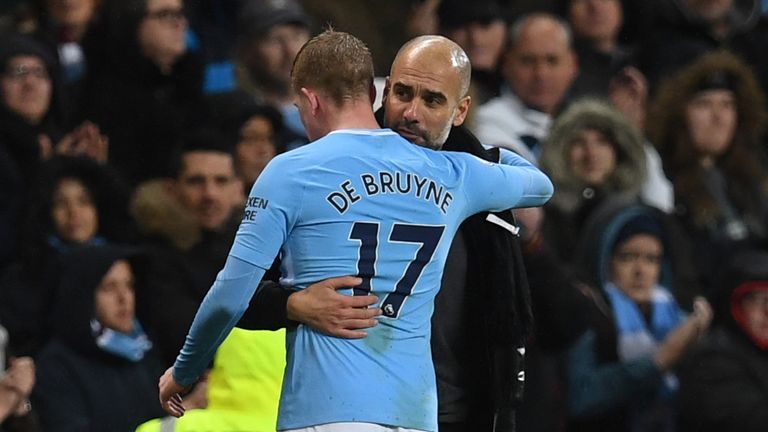 Manchester City manager said Kevin De Bruyne's injury is not a big issue, but admitted that the Belgian may not feature against Liverpool on Thursday.

Pep Guardiola said the injury to Kevin De Bruyne is not a big issue, but may force the Belgian out of Manchester City's vital meeting with Premier League leaders Liverpool on Thursday.

The midfielder did not travel to Southampton for Manchester City's 3-1 victory at St Mary's on Sunday as the champions returned to winning ways following two successive defeats.

With a seven-point margin between themselves and Liverpool, Manchester City will be hoping De Bruyne can feature when the two sides meet, live on Sky Sports Premier League HD.

Guardiola said De Bruyne's 'muscular' injury was unsurprising given that the Belgian had only recently returned from a six-week absence due to a knee ligament injury.

"I don't know how he is," said Guardiola. "Today he was not able to play, but it is not a big issue.

"It is normal for this to happen when you spend three to four months out injured - you come back in such a demanding period and you have a little bit of a problem.

"It's not a big issue, but I cannot say if he will be able to play on Thursday."

De Bruyne has made six Premier League appearances this season, scoring one goal in City's 3-2 defeat to Crystal Palace.