Lukaku was subjected to monkey chants from the crowd during Inter Milan's 2-1 Serie A victory over Cagliari on Sunday.

The chants could be heard before and after the striker scored a penalty in the 72nd minute to win the game.

Inter fans have since defended their Cagliari counterparts, claiming the chants were not meant to be racist.

However, Kompany believes the problem lies in the fact organisations across the globe are not only out of touch but lack the necessary diversity to tackle the issue properly.

"It goes back to who is expected to make a decision on these issues, and it's in these organisations that the problems lie," Kompany told Sky Sports News.

"The real racism lies in the fact none of these institutions have representatives that can actually understand what Romelu (Lukaku) is going through.

"That's the real issue, if you go through the boards at UEFA or FIFA, the Italian League or the English League there is a real lack of diversity

"If you don't have diversity in places of power like boardrooms then you can't have the right decisions in terms of sanctions - it's a simple as that." Kompany says his Manchester City testimonial next week, live on Sky Sports Premier League, is a chance to say a proper goodbye to the club.

Kompany was speaking exclusively during the announcement Sky Sports would be showing his Manchester City testimonial on Wednesday, September 11, live on Sky Sports Premier League.

Kompany played 360 games for City after joining in 2008 from Hamburg, winning four Premier League titles, two FA Cups and four League Cups along the way - including one of each last season, before deciding to leave to become player-coach at Anderlecht this summer.

With an all-star line-up featuring the likes of Mario Balotelli, Cesc Fabregas and Thierry Henry, it promises to be a night for the Belgian to renew old acquaintances, rivalries as well as say a proper farewell to the club. 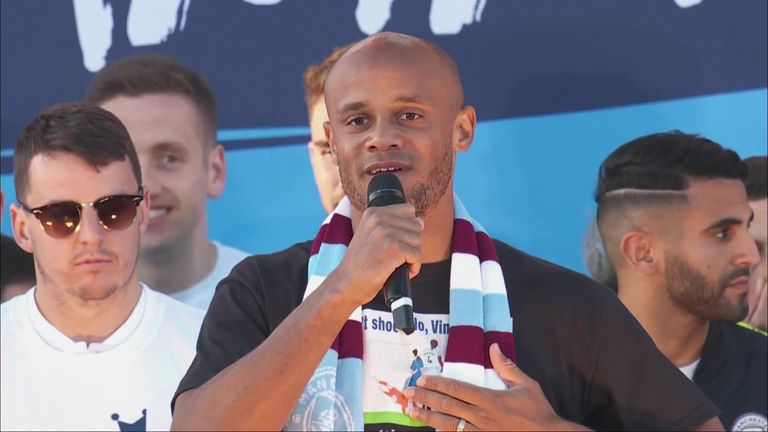 Vincent Kompany admits he has nothing left to give at Manchester City after announcing his decision to return to Anderlecht as player-manager.

"I have had such a special time at City and the testimonial is not so much a game I am just looking forward to for myself, it's a chance to say goodbye," Kompany said.

"The club have been great to me and I have always given everything I've had and this game is for them.

"The fact it is for charity is important to me as well - it's part of Tackle4MCR which is trying to have an effect on the homeless in Manchester.

"I have been privileged to grow and develop in the city and it's unrecognisable from 11 years ago when I first joined but it also seems to have left a lot of people behind as well.

"It just feels like something we have a responsibility to try to affect and what a great opportunity to do it through football."