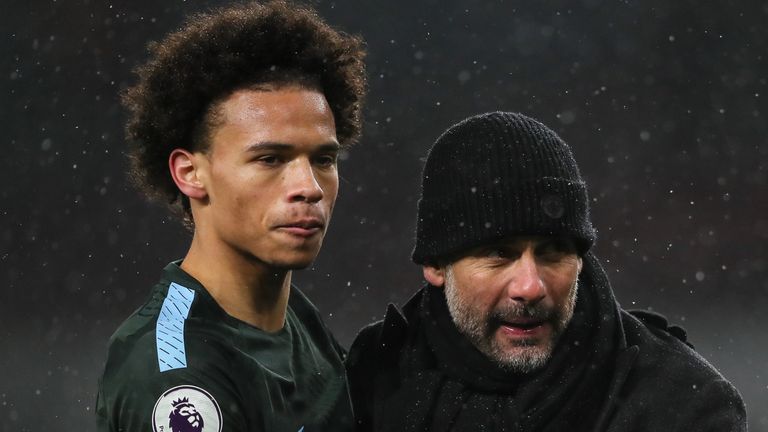 Pep Guardiola says a combination of the financial impact of coronavirus and the players he already has means he may not replace Leroy Sane, who is set to leave Manchester City this summer

Pep Guardiola has admitted that the financial impact of coronavirus could prevent Manchester City from adding to their squad in this summer's transfer market.

City, along with the rest of the Premier League, only returned to action this week after three months off due to the pandemic, and clubs are working to understand how it will affect their accounts.

City have two pressing concerns to address in the upcoming transfer market: finally signing a centre-back to replace Vincent Kompany, who left at the end of last season, and finding a left winger to fill the gap left by Leroy Sane, who is expected to join Bayern Munich.

But ahead of City's second match since the Premier League's return - at home to Burnley on Monday Night Football, live on Sky Sports - Guardiola revealed those plans may have to shelved, saying: "I don't know after coronavirus if the situation for clubs financially has changed. We are going to see at the end of this season.

"It depends if people stay. Maybe in these next two months, the team makes a step forward and we decide to continue with the same people."

Earlier this week, Guardiola revealed Sane had turned down multiple offers to extend his contract at the Etihad, and will leave this summer if a deal can be agreed with a buyer. He is Bayern's No 1 target, but City want over £60m for the 24-year-old.

"We have big-time players up front. They are all the time in healthy condition, so they can play quite regularly. We have other priorities maybe."