Guardiola confirmed after the match that the Argentina international had come off at half-time at the London Stadium due to a new injury - Aguero only returned from a knee problem against Arsenal last weekend - adding that he did not know how serious it was.

As for Aguero's replacement, Phil Foden, who earned City a point with his second-half strike, Guardiola said: "As always, he gave us something extra."

The City manager felt his team "didn't play badly except the last 10 minutes of the first half," adding: "In the second half they defended so deep, and then we had chances at the end to score and we could not convert." 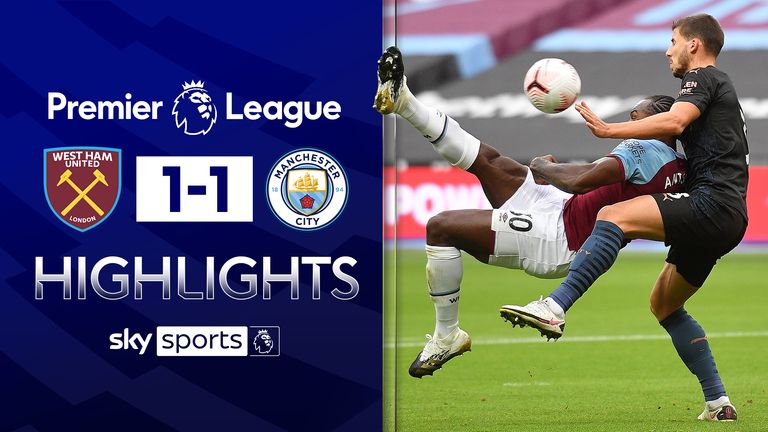 FREE TO WATCH: Highlights from West Ham's draw with Manchester City in the Premier League

Foden said Guardiola had told him to "try to be lively, come on and make a difference", and he said: "I tried to do that.

"Obviously I got the goal, and it's unfortunate we couldn't get the second. On another day Raz [Raheem Sterling] and Riyad [Mahrez] finish their chances.

"I always like to arrive in the box and I enjoy scoring goals, so I'm going to try to continue that form."

When asked if, after a difficult few weeks, it was nice just to be back on the pitch playing football, Foden said: "Yeah, definitely. It's nice to be playing as much as possible, because I love this club and I love playing for them."

West Ham boss David Moyes was once again delighted with his side's battling qualities after they came back from 3-0 down to draw 3-3 late on at Tottenham last Sunday.

And even though West Ham led at the interval thanks to Michail Antonio's spectacular overhead kick, the Scot was more than happy to take a point, especially after their top scorer this season was forced off with injury in the second half.

"There's no doubt the confidence the players have taken (from recent matches)," he said. "The way they have been playing and have trained, they've been very good.

"I'm really pleased. It was tough in the last 20, 30 minutes, but we were still a threat. When we lost Michail then it changed slightly, but overall I'm really pleased we took a point from the game.

"I don't think he (Antonio) is too bad. I think he's feeling it is a bit of a cramp he has got. I hope, because he is a key figure for us and does a great job.

"It was a great goal and he has become really important to the team here."

As well as Aguero, City also have a number of other injured players currently in the treatment room, including:

Fernandinho: The experienced Brazilian came on against Porto in the Champions League in midweek, only to tweak his hamstring. However, despite initial fears the versatile midfielder would be out for up to six weeks, Guardiola has since confirmed he should be back in less than a month.

Benjamin Mendy: The left-back was again not involved at West Ham after picking up an unspecified injury in training ahead of City's 1-1 draw at Leeds at the start of October, but Guardiola expects the Frenchman back next month.

Aymeric Laporte: The centre-back also sustained an injury in training recently, missing City's wins over Arsenal and Porto. But despite not featuring against West Ham, the France international is back in training and could feature in the Champions League at Marseille on Tuesday.

Gabriel Jesus: The striker damaged his thigh in City's 3-1 win at Wolves in their opening match of the season, with Guardiola confirming on Friday that the Brazilian was still "one or two weeks away" from returning to fitness.

Nathan Ake: City's summer signing was left out of the squad against Porto in midweek after what Guardiola described as "niggles in the groin" and did not travel to London on Saturday, with no timescale given about a possible return for the defender.